Global economic output contracted for a second straight month in September, adding to signs that businesses around the world are reporting the toughest conditions outside of pandemic lockdowns since the global financial crisis.

Manufacturing is being hit by rising prices, weakened demand and slumping trade, as well as a shift towards inventory reduction after the stock building seen at the height of the pandemic. In the service sector, consumer focused firms are likewise suffering falling demand due to the cost-of-living crisis. However, rising interest rates are also driving an increasingly severe downturn in financial services, led by a slump in real estate activity.

Meanwhile, cost pressures globally remain elevated, though trends vary by region. While cost inflation showed further signs of moderating in the US and many emerging markets, helping support demand in some cases, inflationary pressures intensified in Europe due to the energy crisis. These varying inflation pressures played a part not only in driving disparities in current demand conditions, but also greatly affected future output expectations, which have deteriorated markedly in Europe. Mainland China also saw business optimism fade further amid concerns over the economic outlook.

The focus now shifts to whether any further cooling of cost pressures can help stimulate growth and offset the adverse impact of rising interest rates, notably on housing markets. 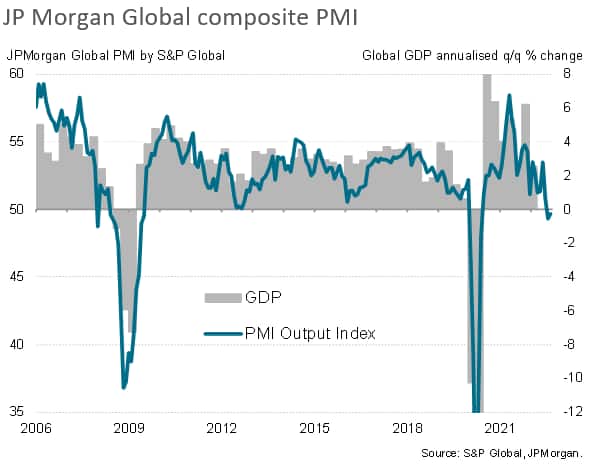 Manufacturing and services fall into decline

Global business activity contracted for a second successive month in September, according to PMI survey data compiled by S&P Global and sponsored by JPMorgan. Although the headline PMI, measuring output of both manufacturing and services, rose from 49.3 in August to 49.7 in September, signalling only a marginal decline in activity and a moderation in the rate of contraction, the latest reading rounds off the worst calendar quarter since 2009 if pandemic-related lockdowns are excluded. 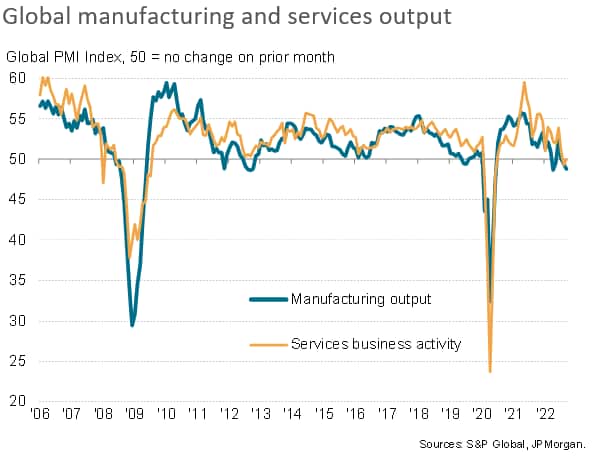 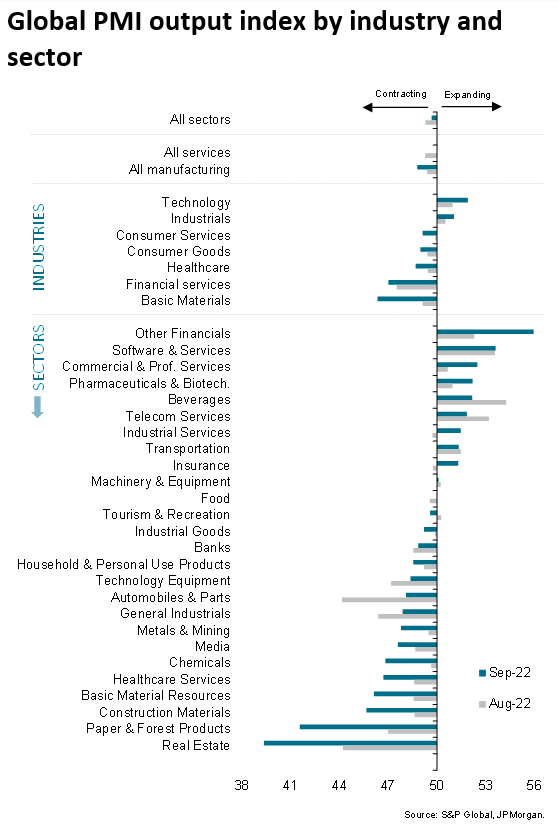 Drilling down into further sector detail, some of the steepest downturns in September were recorded in a clutch of primary manufacturing industries, including timber & paper, construction materials and basic resources.

Many of these goods-producing industries are seeing demand and global trade flows fall as real-terms spending is cut amid the cost of living crisis and increased global economic uncertainty, but also amid inventory reduction policies at many companies (see Global manufacturing PMI falls into contraction territory for first time since 2020 lockdowns).

The deteriorating trends in consumer goods and services output is likewise first and foremost attributed by surveyed companies to inflation. Higher prices are deterring customers at the same time as the broader cost-of-living crisis, linked largely to soaring energy and foods prices, is curbing non-essential spending. Besides lockdown months, consumer services activity is falling globally at a rate not seen since the eurozone debt crisis of 2012, while consumer goods output is falling at the sharpest rate since series began in October 2009. 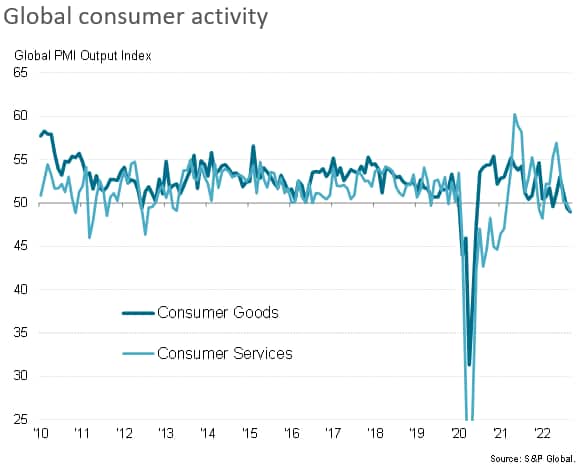 However, the steepest decline of all sectors in September was recorded for real estate services, which underscores the additional pressure on many households that is coming from higher interest rates. Across the US, Canada, Eurozone and the UK - as well as in many other smaller economies - central banks are hiking policy rates in order to help curb the current surge in inflation, even at the expense of the recent downturn in global output. 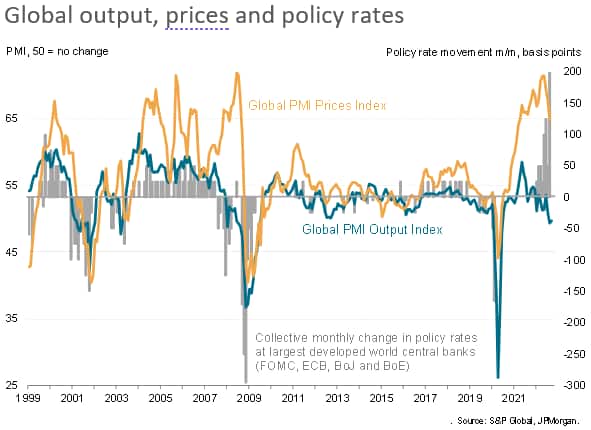 However, these higher borrowing costs are manifesting themselves not only in additional upward pressure on the cost of living, but are also hitting business activity in the financial services sector. The impact is most evident in real estate, where activity is slumping globally at a marked pace, greatly exceeding any weakness seen since data were first available in 2009, bar the initial first months of the lockdown. 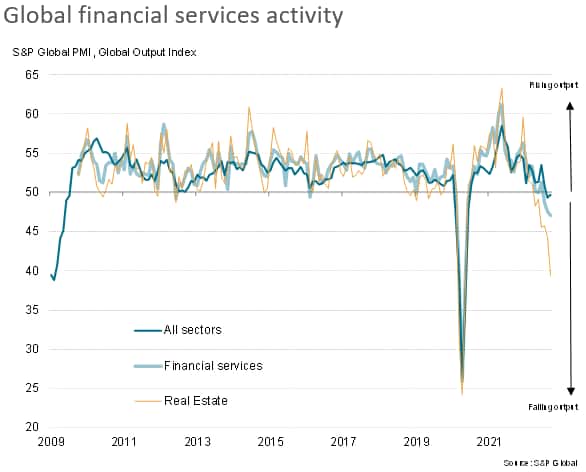 The ongoing pressure on spending from the cost-of-living crisis was reflected in a further rise in global prices signalled by the September PMIs. The composite input prices index covering both manufacturers and service providers remained substantially higher than any time in the past decade prior to the pandemic, though encouragingly showed further signs of cooling. The latest reading was the lowest since March 2021, and points to a further moderation of global consumer price inflation. 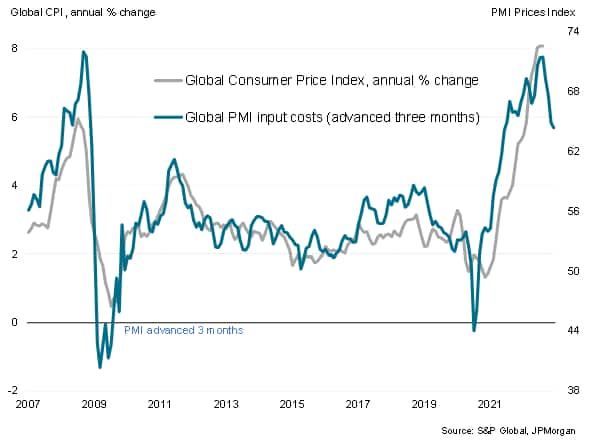 This cooling of price pressures was principally a consequence of the recent downturn in demand, as well as signs of peaking energy prices in some regions and reduced shipping costs. On the other hand, Europe saw a further intensification of gas prices and many countries suffered from higher import prices due to weakened currencies against the US dollar. Higher borrowing costs were also widely reported, in turn linked to hikes in central bank policy rates.

While the US also continued to contract, with output down for a third month to round off the worst quarter since 2009, barring pandemic shutdown months, the rate of decline moderated to the weakest seen over these past three months.

In Japan, output returned to growth after slipping into decline in August for the first time in six months. 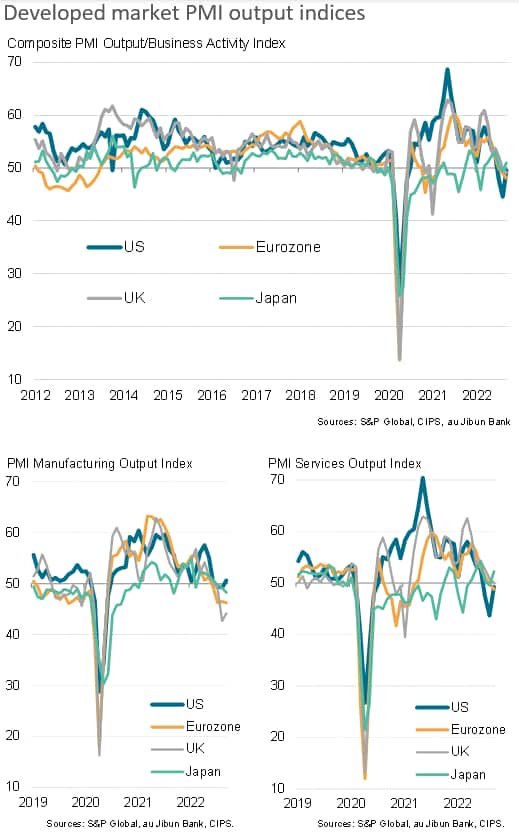 While the modest growth revival in Japan primarily reflecting loosened COVID-19 restrictions benefitting Japan's service sector, the moderating rate of decline in the US could be traced in part to a softening of inflation pressures. While input cost inflation re-accelerated in the Eurozone, UK and Japan, it fell to a 20-month low in the US. 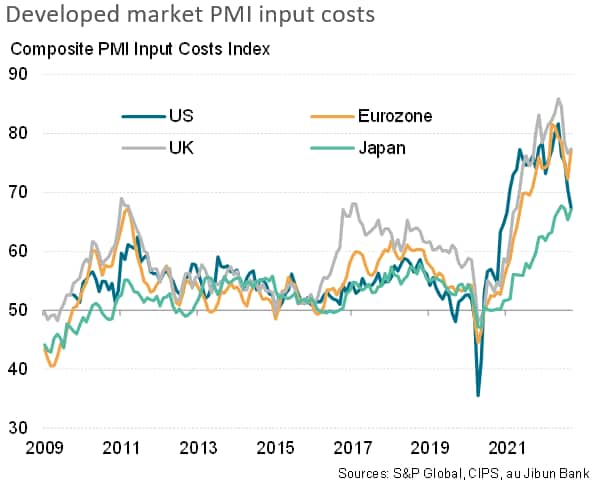 Growth trends meanwhile varied among the major 'BRIC' emerging markets. India again reported the strongest expansion, albeit with the rate of increase softening to a six-month low as growth slowed in both manufacturing and services. Growth also weakened in Brazil as political uncertainty exacerbated existing economic headwinds.

Business activity meanwhile fell back into decline in mainland China, down for the first time in four months amid renewed contractions in both manufacturing and services. Survey respondents blamed ongoing pandemic-related containment measures as well as worsening global demand conditions.

Bucking the deteriorating trend among the BRICs was Russia, where output growth picked up after the near-stalling seen in August. Russia's expansion nonetheless remained very subdued by historical standards due in part to the impact of sanctions and an associated further steep fall in exports. 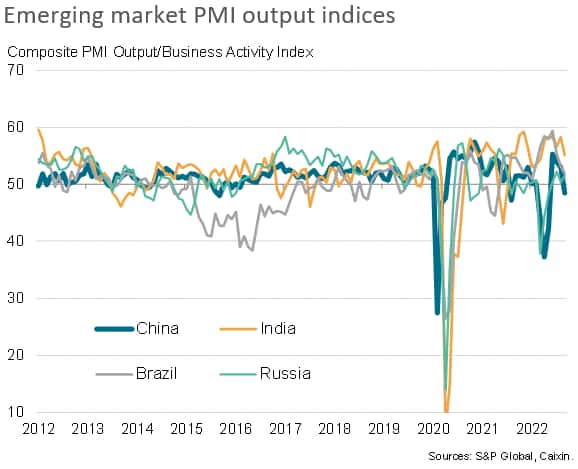 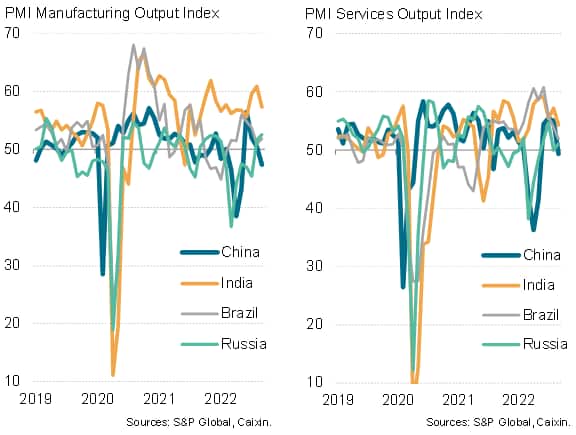 Input cost inflation rates meanwhile sank sharply across the major emerging markets, most notably plummeting to a 27-month low in Brazil with 22- and 20-month lows seen in India and Russia respectively. However, the weakest inflation pressures were seen in mainland China, where costs barely rose to signal the slowest rate of inflation for 28 months (since the initial pandemic shutdowns). 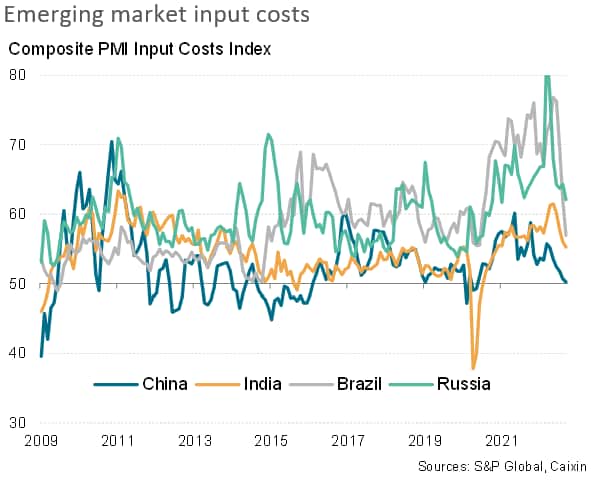 Looking ahead, there was also a noticeable divergence in optimism about the year ahead among the world's major economies.

Lower inflation pressures helped soften pessimism in the US and, combined with post-covid recovery hopes, helped sustained elevated levels of confidence in economies such as Brazil, India and Japan. Weakened currencies, which benefit exporters, also helped in some cases outside of the US.

However, confidence fell further below long-run averages in the Eurozone and UK, as concerns over inflation and energy markets caused the mood to darken further. In the UK, political uncertainty and financial market gyrations added to the gloom.

Sentiment also fell below its long run average in mainland China, reflecting the recent downturn in demand and concerns about the ongoing impact of COVID-19 containment measures. 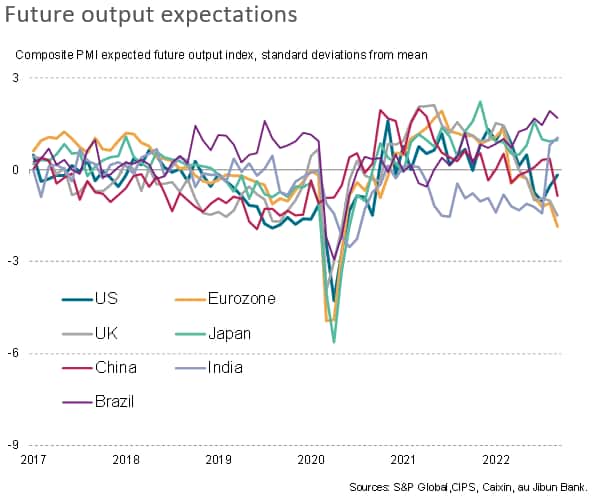 The drop in confidence in China highlights how one of the world's largest economies remains subdued by the pandemic, and will therefore continue to act as a drag on global growth at a time when rising interest rates look set to add to recession risks in Europe and, to a lesser extent, the US - to a large extent via housing markets and consumer spending.