October's flash PMI data for the UK will be eagerly awaited, given the growing chorus of concerns regarding the country's economic health and financial market stability.

A botched 'mini' budget in late September - that turned into one of the most disruptive government-induced economic shocks in recent memory - exacerbated downward pressure on sterling and gilts, leading to unprecedented intervention in the bond market by the Bank of England to help stave off a pension industry crisis. The additional upward pressure on already-elevated interest rate expectations meanwhile drove a further spike in mortgage rates.

As a consequence, many forecasters - including the International Monetary Fund - have downgraded the UK's economic outlook while simultaneously estimating that the UK will see higher and more persistent inflation than any of its peers.

Assessing the business situation under a new economic environment

Against this backdrop, S&P Global will be collecting the October PMI survey data. The vast majority of September's PMI questionnaires had been completed by participants prior to the mini budget, and in any event the PMI surveys ask respondents to compare the situation at mid-month versus one month ago, thereby missing the impact of the budget. However, the final September PMI numbers - which included late responses in the month - did show a marked deterioration in the business expectations index compared to the earlier flash numbers. This suggests that, while actual output levels were not immediately affected on balance by the budget shock, sentiment about the year ahead had darkened among businesses as a result of the uncertainty caused by the new government's economic strategy. This drop in confidence has fueled suspicions that the upcoming October data could show a deteriorating business situation.

A weak set of October PMI numbers would be particularly market sensitive as they would increase the risk of the UK falling into recession.

Both the PMI and official GDP data hint strongly at the economy having already fallen into contraction in the third quarter, so a fourth quarter decline would meet the technical definition of a recession (two consecutive quarterly contractions).

As noted in our September flash PMI report, the survey data were indicative of GDP falling at a quarterly rate of 0.25%. While subsequent GDP releases have been somewhat favorable in the sense that a 0.1% second quarter decline has now been revised away to show 0.2% growth, the latest August GDP numbers showed the economy contracting in the latest three months by 0.3%. Restricting GDP to comparable coverage of the PMI (excluding retail, government spending and energy) the official data showed a 0.2% quarterly rate of contraction.

The third quarter therefore looks highly likely to be one in which the UK economy contracted. 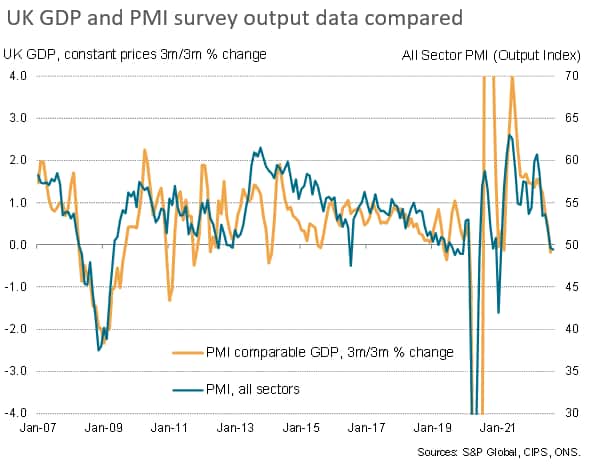 It is also worrying that the growing UK malaise is so broad-based, with the cost-of-living crisis and elevated price pressures hitting demand abroad a wide variety of industries.

Both the PMI and official data suggest private sector services output growth has slowed sharply, with the PMI indicating a stalling of the expansion in September. Construction output is meanwhile also looking largely stalled in the third quarter.

For manufacturing, the data are even more worrying. Both the PMI and official data point to a third quarter downturn which, excluding the initial pandemic shutdowns, is looking to be the steepest since the global financial crisis. 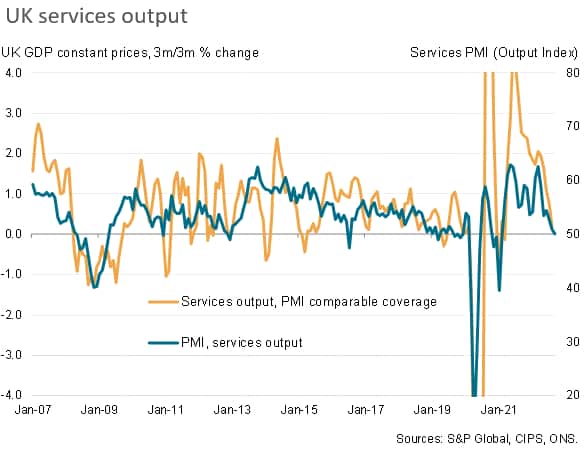 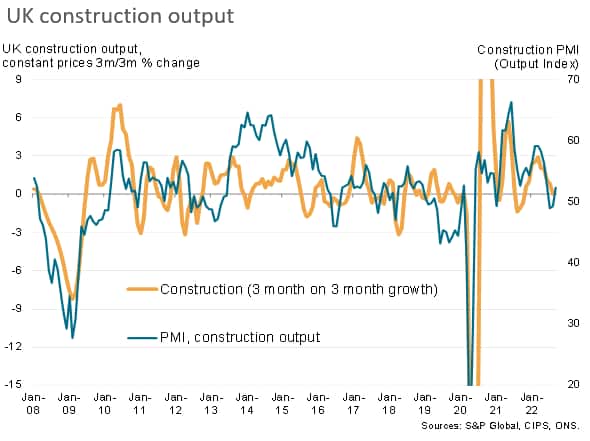 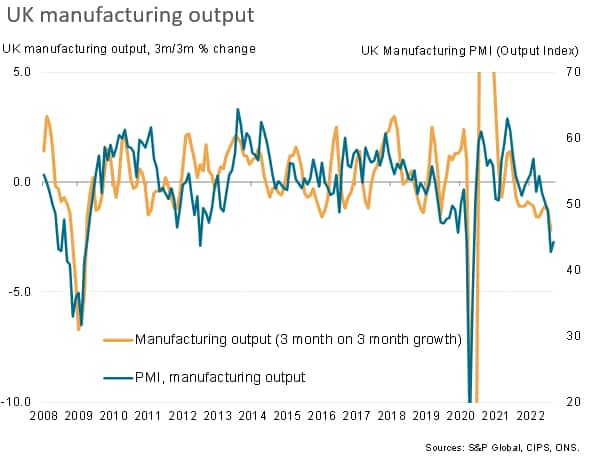 Taking a closer look at the survey's forward-looking sub-indices, both the all-sector new orders index and the future expectations index from the UK PMI survey are now down to levels that signal worsening output trends in coming months, adding to fourth quarter contraction risks. In fact, both of these indices are at levels which have rarely been plumbed in the survey quarter-century history of the PMI, and are collectively signalling an economic outlook that has not been gloomier (barring the pandemic lockdowns) since 2009. These forward-looking subindices will be especially important to watch in the October release. 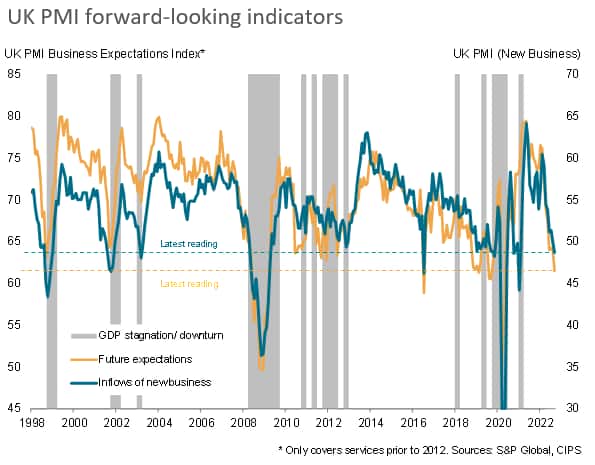 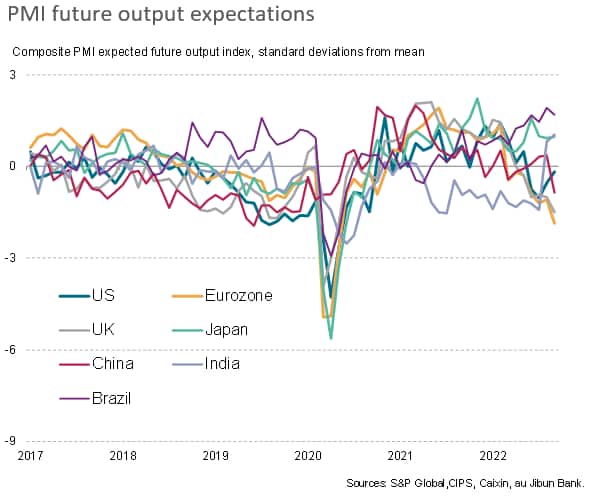 Speculation that the UK is suffering higher than average inflation among its peers is meanwhile supported by the recent PMI data. On average, prices charged for goods and services are rising at fastest rates in the UK than in the Eurozone and US. In fact, while the rate of increase has fallen sharply in the US from elevated levels earlier in the year, there are signs of resurgent rates of inflation in Europe. 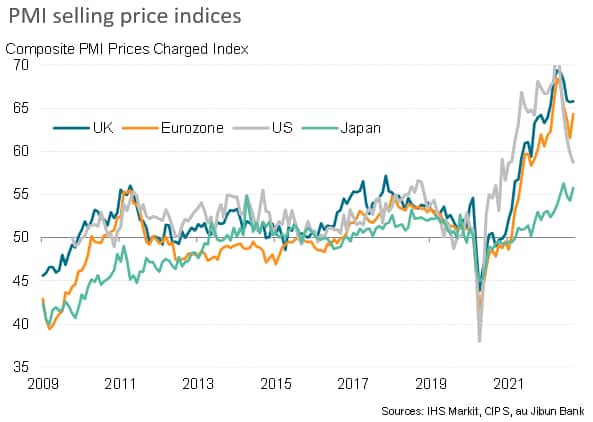 To get an idea of what these diverging PMI price trends mean for inflation, the drop in the US PMI price gauge pushes the annual inflation signal down below 5%, but for the UK the PMI price indices signal inflation reaccelerating to around 7%. 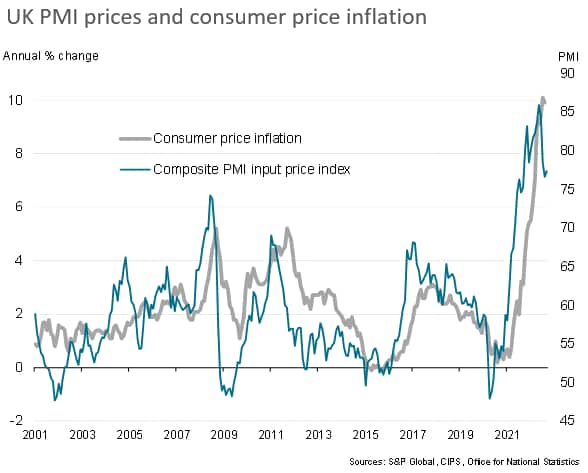 These inflation rate divergences are of course important as they will have a clear bearing on monetary policy decisions going forward. Although the US, Eurozone and UK are all seeing heightened recession risks, any easing of price pressures could allow policymakers to ease off with hiking interest rates. At the moment, this is therefore looking more of a possibility in the US than in Europe. 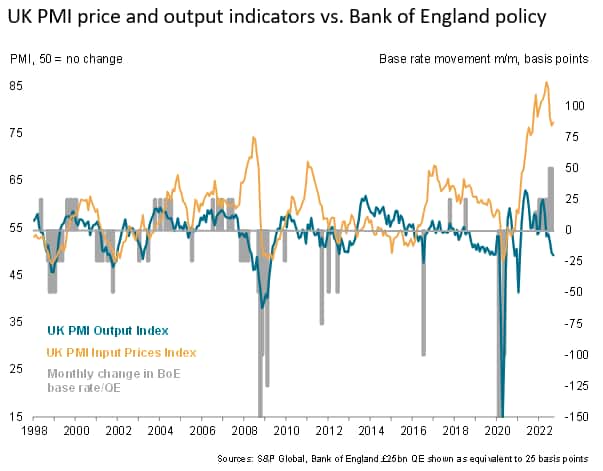 A further indicator to keep an eye on in the upcoming PMI surveys is the employment index. This index measures actual changes in staffing numbers compared to the prior month, rather than hiring intentions, so acts as a coincident labour market indicator. However, the PMI signals are available ahead of official data. At present, both the PMI and official employment data are showing sustained robust jobs growth, albeit with rates of increase having slowed. This slowing is likely as much a consequence of labour shortages amid historically low unemployment rates, but there are signs that job vacancies are starting to fall, which - if reflected in another drop in the PMI's employment index - could encourage a more cautious stance at the Bank of England in relation to interest rate hikes. 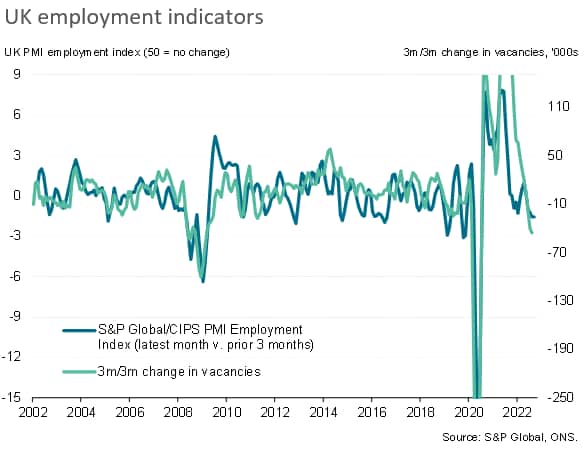