This week, a number of key economic releases will add insights to macroeconomic conditions in the US, UK and Eurozone after PMI survey data hinted at further global recession risks and persistent inflation, albeit with some encouraging rays of light.

US retail sales and inflation data will be high on the agenda for many this week. Retail sales figures in the US have been hard hit by the growing cost of living, though inflation data should indicate a further moderation in inflationary pressures, notably after easing cost pressures were indicated by PMI surveys. Consumer sentiment data will meanwhile provide a timely gauge into how households are coping with rising mortgage costs and the ongoing cost of living squeeze. Recent data have shown some signs of sentiment reviving, but the impact of rising interest rates may not yet be fully reflected. In that respect, the FOMC meeting minutes will also be eagerly assessed for guidance on the Fed's appetite for further rate hikes.

With the UK driving much of the market turmoil in recent weeks, the FX and gilt markets will be watching political developments as PM Truss seeks to restore some authority, and will be eager for more clues as to growing recession risks. UK unemployment, industrial production and GDP data will be released, with the latter in particular likely to add to signs that the economy contracted again in the third quarter. Eurozone watchers will keep a close eye on industrial production and German inflation data where in the latter the 70-year high is expected to be confirmed, presenting a picture of rising stagflation risks.

Key releases for mainland China will also be keenly awaited by markets this week amid signs that ongoing COVID-19 containment measures likely continued to restrain economic activity, though also suppressed price pressures. Data updates include inflation and balance of trade. Watch out also for Q3 GDP figures for Singapore, where forecasters expect a relatively solid expansion. The Bank of Korea will also convene to make another key policy decision, with rate hikes on the table.

The September PMI surveys indicated a second month of falling global economic activity, rounding off the worst calendar quarter since 2009 if pandemic lockdown months are excluded. Inflationary pressures, as measured by the PMI input cost index (which covers average prices paid for a variety of inputs including raw materials, energy, rents, bought-in services and wages) remained elevated, but encouragingly fell to their lowest for one-and-a-half years.

The situation of course varies geographically, with the drop in inflationary pressures most evident in the US. Easing supply constraints, inventory drawdowns, lower oil prices and cooling demand took pressure off firms' costs, as did the stronger dollar. However, the energy crisis linked to the Ukraine war meanwhile meant cost pressures re-accelerated in Europe, exacerbated by weakened sterling and euro currencies. A similar currency effect was evident in Japan, where price pressures also rose.

The data will nonetheless fuel debate as to whether policymakers, notably in the US, will start to see their aggressive policy tightening as helping cool inflationary pressures. The concomitant increased risk of a global recession could potentially also further encourage a change in tone as to the required degree of further tightening. The upcoming FOMC minutes, as well as US consumer confidence and retail sales data, will provide further guidance in this respect. 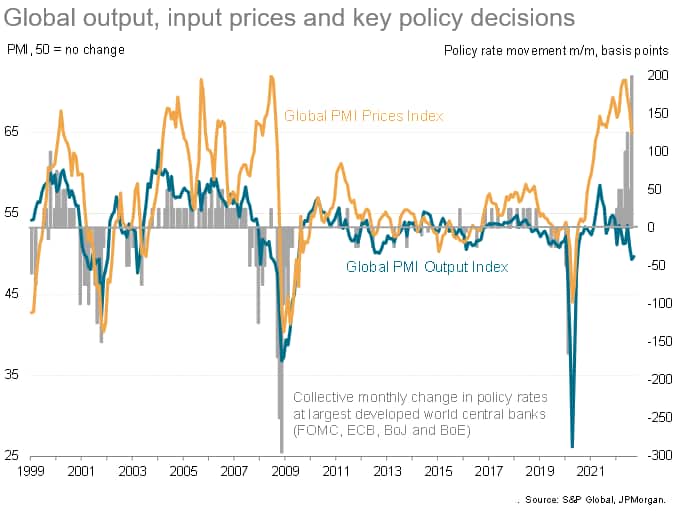 Another busy week for the US sees key economic data come to light with attention on inflation figures. Markets are forecasting inflation at 8.1% in September, easing from 8.3% in August. The energy crisis is still having profound implications on prices, but latest PMI releases suggest inflation pressures are starting to moderate. Meanwhile, retail sales and consumer sentiment data will shed light on household trends amid rising interest rates and the ongoing cost of living squeeze. Forecasts point a modest 0.2% increase in sales, but it will be especially interesting to see if the pessimism continues to ease. How the FOMC assessed the economic situation when hiking interest rates by another 75 basis points in September will meanwhile be revealed in the meeting minutes.

The UK dominated headlines last week following market turmoil on the back of new tax decisions. This week, UK economic releases will be high on the agenda with GDP and labour market data providing an update on the country's performance. Unemployment data - out Tuesday - is expected to remain low despite growing price pressures on firms and businesses. GDP and industrial production data, meanwhile, will likely point to slowdowns in growth and will likely add to growing signs of recession.

Elsewhere in Europe, industrial production and trade data for the eurozone will likely remain weak, while a 10% inflation rate for September is expected to be confirmed in Germany.

APAC watchers are treated to a number of releases including Singapore's Q3 GDP estimate. Latest PMI data for Singapore have remained strong, with the country topping the ASEAN rankings in recent months. China inflation and balance of trade data will also be watched with the latter expected to take a hit from a combination of virus-containment measures and weak global demand.

In India a strong industrial production performance is expected while inflation figures will loiter around the 7% mark. The Bank of Korea will meet to set interest rates, where they will likely not shy away from another hike despite a slowdown in September's inflation rate.