A busy week ahead for economic releases is expected with the key focus on US and China inflation figures for October. China will also update October trade figures. The United Kingdom meanwhile releases third quarter GDP figures while Germany's industrial production data will also be due. A series of central bankers' appearances, including those from the US Federal Reserve will be watched intently after this week's Fed FOMC meeting.

The market witnessed another 75 basis points hike by the Fed this week, but it was unsurprising indications of the path forward that were the highlights. Amid hints of continued, albeit smaller, hikes in upcoming meetings aimed to prevent a "very premature" pause in tackling inflation, stock prices slipped in the Wednesday session. Fed Chair Jerome Powell's emphasis on incoming data guiding the central bank in further tightening also doubled down on the importance of inflation numbers in shaping the road ahead, which was within our expectation. Next week's consumer price index (CPI) data will therefore be of key importance with any deviation from the consensus potentially market moving. As far as the S&P Global US Composite PMI suggested, the easing of output charge inflation was seen in October for the private sector which is in line with consensus expectations of slowing core CPI growth. Next week's S&P Global Investment Managers Index will also shed light on money managers' views with regards to the US equity market.

Outside of the US, UK monthly output figures will capture the market's attention following a period of heightened volatility for the British pound. While the PMI data alluded to the potential for a third quarter contraction, official data will be watched for the extent of deterioration. Meanwhile China's inflation and trade data will further outline the extent to which lingering COVID-19 restrictions have affected economic conditions. 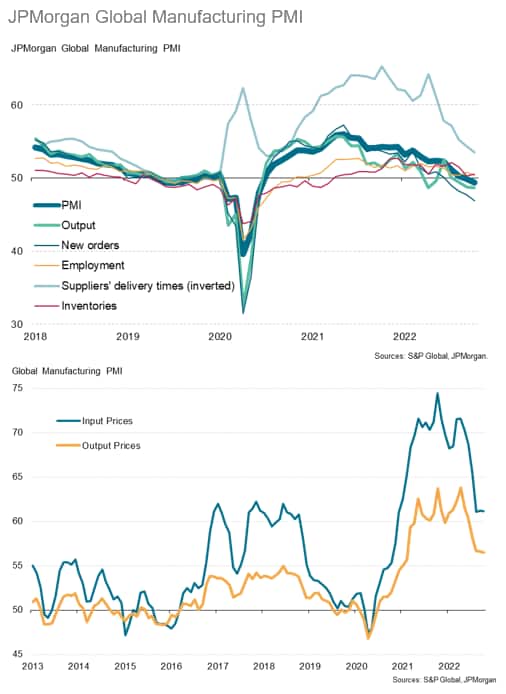 October's US CPI data will be released in the coming week and will be of key interest for the market that remains caught between elevated price pressures and tighter monetary conditions. This week's US Fed FOMC meeting saw the central bank raise rates by 75 basis points and signalled further rate increases, albeit at smaller magnitudes, all in a bid to tame inflation. While smaller Fed hikes are widely expected post the November meeting, the magnitude of these rate rises will ultimately be data driven and thus upcoming inflation releases will be closely scrutinised. Consensus expectations point to a faster 0.7% month-on-month (MoM) increase for headline CPI while core CPI growth may slow to 0.5% MoM. Indications from the S&P Global US Composite PMI pointed to the easing of price pressures for the private sector in October, though rates remained elevated.

UK updates September monthly output figures alongside Q3 growth figures in the coming week. Falling private sector output punctuated a quarter that had been marred with political uncertainties according to the S&P Global / CIPS UK Composite PMI data. This preludes to the likelihood of a third quarter contraction while GDP look certain to fall in the quarter thereafter. Furthermore, the manufacturing sector is expected to fare worse according to PMI indications.

In APAC, China's trade and inflation data will be the highlight in the coming week. According to consensus, factory gate prices is expected to fall for the first time since December 2020 while headline CPI will ease slightly to 2.5%. COVID-19 containment measures in Mainland China continued to restrict manufacturing output and demand according to the latest Caixin China General Manufacturing PMI, in turn depressing prices for goods producers.

Meanwhile October trade figures will also be due with export growth expected to further moderate in USD terms.