US, China retail sales and production data, plus UK inflation and jobs

The week ahead finds a busy economic calendar alongside a series of Fed appearances which remain in focus given uncertainties over the pace of monetary policy tightening. Both US and China will update retail sales and industrial production figures for April, providing insights into second quarter GDP performances. In Europe, eurozone Q1 GDP and inflation numbers will be due. Meanwhile UK inflation and labour market data will be released to add clues as to the challenges facing the Bank of England. GDP data releases from some Japan, Thailand and Singapore are also lined up for the week.

Market sentiment remains weak into mid-May amid concerns over inflation, interest rates and economic growth outlooks. According to the latest S&P Global Investment Manager Index, investors remained risk averse in early May, citing monetary policy and geopolitics as the biggest drags on US equity performance. Following the latest Q1 earnings season, US equity investors also further downgraded their corporate earnings expectations for Q2, speaking to both the sensitivity of earnings to interest rates and the worries over demand destruction as a result of higher inflationary pressures and ongoing global developments. As such, official April data due from the US and China - including retail sales and industrial production - will be keenly watched in the week ahead before we get May flash PMI figures from major developed economies in the following week.

Meanwhile, UK inflation and labour market data for April will be released in the coming week for a check on whether inflationary pressures further worsened, as indicated by PMI data. Also watch out for UK retail sales and consumer sentiment data to gauge the degree to which households are being squeezed by the cost-of-living crisis. This comes after the Bank of England raised rates once again at its May meeting.

Looking back into Q1 performance, a series of GDP data will also be due from the eurozone, Japan, Thailand and Singapore, with the focus on Japan's data for indications of the extent to which GDP likely contracted in the first quarter.

Our special report featuring the latest detailed sector PMI data shows the global economy being driven by a rebound in spending on consumer services. Having been hit especially hard during the pandemic prior to vaccine availability, consumers in April were spending at one of the fastest rates seen over the past decade as worries over the Omicron wave eased in most major economies. 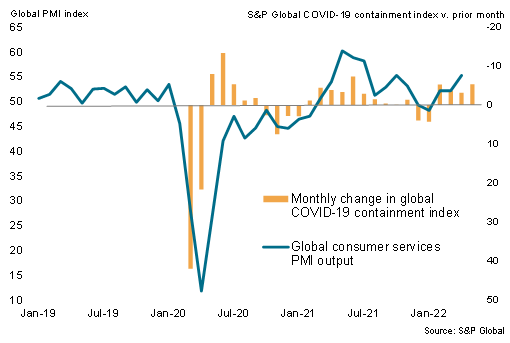 The problem is that all other major sectors of the global economy have either stalled or are back in decline, having been hit by soaring prices, supply bottlenecks and the diversion of spending to services. That leaves the global economy reliant on a rebound in consumer services, which by definition is temporary. Robust growth will therefore likely require the supply shock and inflation to moderate. 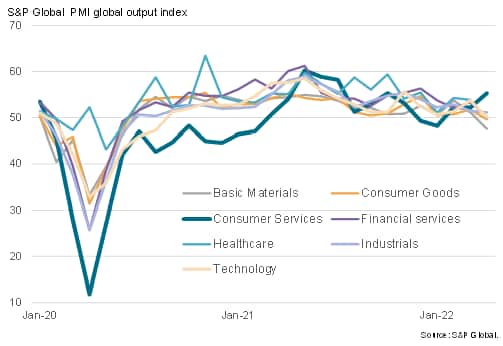 More Fed appearances are lined up in the coming week, in focus amid persistent concerns over inflation and the monetary policy outlook. Some key US economic data will also be released, including April retail sales and industrial production. S&P Global US PMI suggest that manufacturing output continued to expand at a strong rate in April while services business activity growth moderated from March, albeit remaining at a solid pace, as activity continued to rebound after the loosening of pandemic restrictions, though business confidence had deteriorated amid worries about inflation, supply disruptions, and the Ukraine war.

Revised Q1 GDP and April HICP readings from the eurozone will be updated after preliminary data showed the economy growing just 0.2% in the first three months of the year while inflation accelerating to 7.5%.

In the UK, inflation and labour market data will take centre stage. According to the S&P Global / CIPS UK Composite PMI data, inflationary pressures worsened in April while private sector firms continued to expand staffing levels rapidly, though at a softer pace. Consumer confidence and retail sales data will also be eagerly assessed for the impact of inflation.

Following trade and inflation data, China releases April industrial production and retail sales figures in the coming week, shedding more light on the impact of recent COVID-19 restrictions on economic performance at the start of the second quarter. Amid widespread lockdowns that continue affect the region, both retail sales and industrial production data are expected to have deteriorated compared to March. Early PMI data across both the manufacturing and services showed output contracting very sharply in April.

Separately, GDP figures from Japan, Thailand and Singapore will also be released. Japan's Q1 performance will be watched for the extent of the slowdown with our forecast pointing to a 0.6% quarter-on-quarter (q/q) decline.