Manufacturers in Kazakhstan face logistical struggles amid sanctions on Russia

Manufacturers in Kazakhstan continue to be impacted by the spillover effects of the war in Ukraine and imposition of sanctions on key trade partner Russia, according to the latest PMI survey data, but there were signs of recovery in the service sector at the start of the second quarter.

As with most economies around the world, strong inflationary pressures are a key feature of the economy at present, with the National Bank of Kazakhstan (NBK) raising interest rates to a six-year high in a bid to try and limit surging inflation.

The Tengri Partners Kazakhstan PMI data, compiled by S&P Global, showed that output in the combined manufacturing and service sectors increased marginally in April as new orders stabilised following a decline in March amid the outbreak of war in Ukraine. That said, the overall figures masked divergent trends across the two sectors covered, with the service sector returning to growth while manufacturing remained in contraction. 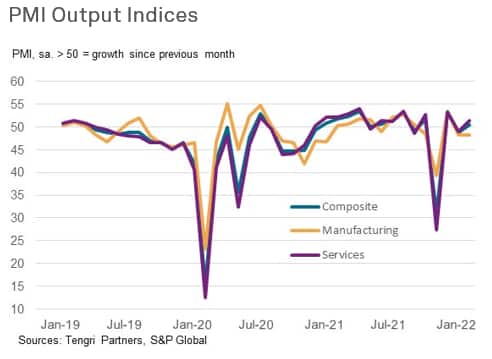 Manufacturers impacted by war in Ukraine

The weakness seen in the manufacturing sector was often linked to issues around the war in Ukraine, both in terms of supply and price pressures. There were widespread reports of logistical difficulties caused by the imposition of sanctions on Russia as goods normally arriving in Kazakhstan via Russia have become less readily available. Around 40% of Kazakhstan's imports come from or via Russia and so the supply chain disruption clearly has a large impact on firms' ability to secure inputs. Producers either needed to wait longer for goods from Russia or seek alternative trade routes. Suppliers' delivery times consequently lengthened substantially in April, and to one of the greatest extents since the onset of the COVID-19 pandemic.

Meanwhile, input cost inflation quickened for the third month running, with currency fluctuations adding to upward pressures on prices caused by supply difficulties. This again was a symptom of the war in Ukraine as the tenge often moves in line with the Russian rouble.

Difficulties securing materials hampered production lines, with output down for the second month running as a result. In turn, a reduced ability to keep up with orders meant that backlogs of work increased solidly.

The fallout from the war was primarily limited to the manufacturing sector during April, as service firms reported renewed expansions in business activity and new orders. Attributed to the latest relaxation of pandemic-related restrictions, rebounding client demand managed to overturn the sector's contractionary position seen in March.

Nonetheless, effects from the war were evident in the service sector, primarily in the price indices. Both input price and output charge inflation rose to the highest recorded in just over three years of data collection, as tenge-dollar fluctuations and supply chain disruptions resulted in higher procurement costs.

With ongoing pandemic related volatility disrupting the economy since the start of the year, now exacerbated by the uncertainty surrounding the effects of the war, the service sector's resilience is set to be tested in the coming months. 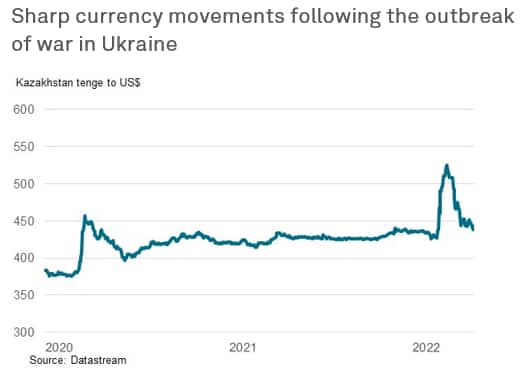 Located between two major nations, Russia and mainland China, Kazakhstan managed to keep its footing in April despite the declining economic health of its neighbours. However, growth was only modest and price pressures remain elevated due to geopolitical headwinds and global inflation. In line with the picture for services, rates of inflation at the composite level hit the fastest pace on record at the start of the second quarter.

Trends in the PMI data have been borne out by official figures, with consumer prices rising 12.0% year-on-year in March, meaning inflation has hit double-digits for the first time in more than five years. With the PMI showing a continued acceleration in April, there could be further risk for the official data to rise.

In response, the National Bank of Kazakhstan raised interest rates in April to 14.0%, up from 13.5%. Rates now stand at the highest since June 2016. 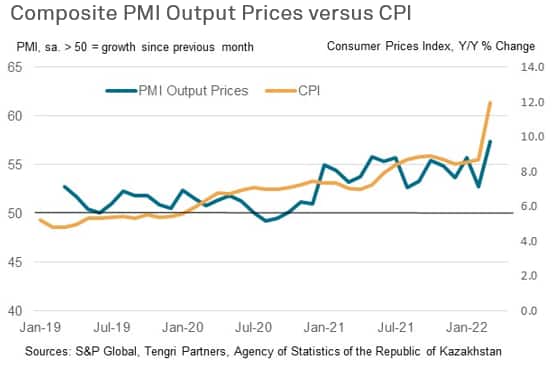 Find out more essential intelligence you need to understand the impact of the Russia-Ukraine conflict.