A period of mourning observed to mark the death of Queen Elizabeth II takes place and means a scheduled policy meeting at the Bank of England has now been deferred to the 22nd September. Official GDP, inflation and job market data releases remain in the diary, causing the economic spotlight to fall on the UK as the week commences. Elsewhere, a busy economic calendar includes industrial production and retail sales data for the US and mainland China, as well as US and eurozone inflation numbers, plus a clutch of other industrial production and CPI updates around the world.

July's GDP update for the UK will help gauge recession risks amid a troubled currency, persistent high prices and rising economic uncertainty. Our forecasts point to a slowdown in growth in Q3 (1.86% v 2.91% in Q2), with the PMI having entered contraction territory in August. UK labour market statistics will also be eagerly assessed, both for second-round inflation effects in the wages data as well as for indications on the overall tightness of the job market, notably through vacancies. Recent recruitment survey data have hinted at a cooling job market.

Industrial production data meanwhile flows thick and fast, with a number of G7 and Asian economies releasing latest figures. Among those most watched will be the US, Japan, the UK and mainland China where August Manufacturing PMIs revealed contractions in output in the former three economies as well as a slowdown in China. China's retail sales data will also be keenly awaited, with lockdowns likely to have continued to constrain spending.

Elsewhere, inflation data for the Eurozone, US, UK, Germany, France and Spain will be updated. Eurozone inflation is set to be confirmed at 9.1%, the highest on record. In the US, while figures are projected to remain high, forecasts indicate a moderation (8.1%, down from 8.5%). In the UK, the energy crisis has been a particular concern for businesses and households alike. Inflation entered double digits and is forecast to prove sticky, remaining high at 10.5%, though recent announcements to help households with soaring energy costs suggests inflation will peak lower than previously anticipated.

With the world's major central banks remaining firmly in aggressive tightening mode, it's no surprise to see demand for real estate coming under pressure, though the scale of the slump is becoming a growing concern.

S&P Global's detailed sector PMI showed new orders for real estate services to have fallen worldwide for a sixth month running in August, with the rate of decline running in recent months at a pace far surpassing anything seen since the global financial crisis, excluding the initial pandemic lockdowns. The broader financial services sector is likewise seeing a downturn of an intensity not seen since data were first available in 2009, barring the 2020 lockdowns, led by falling activity and demand in the US.

Deteriorating financial services performance can be traced to the rise in borrowing costs associated with tightening monetary policy, which has further to run. The ECB last week hiked its key policy rates by 75 basis points with further hikes signalled into the new year. The FOMC and Bank of England are likewise anticipated to continue to further ratchet up their policy rates aggressively as we head into 2023.

Any swift turnaround in the financial services sector therefore looks unlikely, and the performance of the sector will need to be monitored closely for signs of stress in the coming months, as worsening financial services trends can easily spill-over to the real economy, notably via defaults and reduced lending. 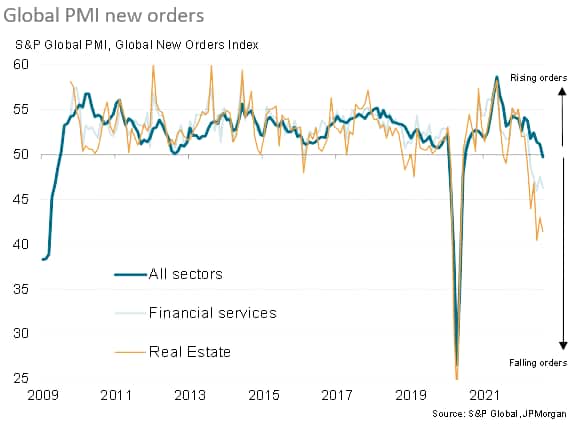 The US sees the release of CPI, University of Michigan consumer sentiment, retail sales and industrial production data. CPI data will be keenly eyed for further signs of the rate of increase having peaked, and the impact of high inflation (and rising borrowing costs) on consumers will be parsed from the sentiment data. Likewise, following stalled growth in July, retail sales will also be watched closely amid recent Fed hikes and the ongoing cost of living crisis. Analysts are meanwhile looking for a 0.8% rise in industrial production, albeit both ISM and PMI data showing some signs of manufacturing conditions starting to come under pressure

A scheduled Bank of England monetary policy decision has been postponed due to the Queen's death, though the week sees with monthly GDP from the UK, which will be assessed for recession risks, as well as updated consumer price numbers, which recently struck a four-decade high, plus labour market statistics.

A wealth of official European industrial production data will also be released which will provide insight into manufacturing health of some of the largest economies. Forecasters predict that Eurozone, UK, and Italian figures are likely to adhere to the current downward trajectories, especially given the contractionary nature of their respective manufacturing PMIs.

Eurozone inflation data will also be a standout release in Europe this week, including details for Germany, France and Spain. Large energy reserves in France have made it less susceptible to recent shocks with inflation much lower than the EU as a whole. Predictions anticipate a moderation from 6.1% to 5.8% in August.

In APAC, India, mainland China, Japan and Hong Kong SAR industrial production figures will be released. Forecasters expect that China's manufacturing production will expand by only 0.2% amid the constraints of the ongoing zero COVID-19 policy. Retail sales for August are also likely to look weak.

In addition to the industrial production data, balance of trade figures for Japan will reveal export and import conditions, all of which are under scrutiny given the weakening of the yen to quarter-century lows.