The latest S&P Global Electronics PMI survey for August 2022 indicated that the electronics sector has started to contract for the first time in two years. The electronics industry is an important part of the manufacturing export sectors of many Asian industrial economies, including mainland China, South Korea, Japan, Singapore, Taiwan, Malaysia, Thailand and Vietnam. Consequently, the slowdown in global electronics new orders signals a softening outlook for the electronics export industries in many APAC economies.

The global electronics industry had shown positive expansion since mid-2020, as the COVID-19 pandemic has driven strong demand for consumer electronics for remote working and home entertainment. However, the pace of expansion showed some moderation during the first half of 2022, with the August 2022 S&P Global Electronics PMI survey signaling that the sector has begun to experience contractionary conditions.

South Korea's exports of semiconductors measured in USD value terms fell by 7.8% year-on-year (y/y) in August, the first annual decline in 26 months. This was a significant reversal compared with the first half of 2022, when South Korean exports of semiconductors rose by 21% y/y. The decline reflected lower semiconductor prices and weaker demand. Exports of mobile phones and components declined by 21% y/y in August, reflecting lower shipments to mainland China and Southeast Asia. Exports of computers fell by 30% y/y, while exports of panels declined by 6% y/y.

In Taiwan, the information and communications sector and the audio/video industry recorded a 1.6% y/y decline in exports in August due to weaker global consumer demand conditions. However, semiconductor exports remained strong in August, rising by 14% y/y. 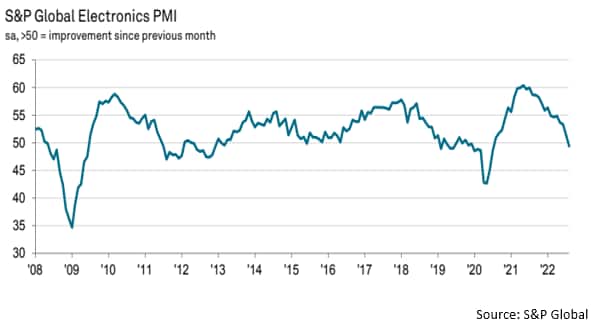 The two principal sub-components of the Global Electronics PMI - new orders and output - both slipped deeper into contraction territory during August, while inventory levels increased due to sluggish sales and falling production requirements. Weakening economic growth momentum in the US and EU has impacted on consumer demand for electronics, with the economic slowdown in mainland China also contributing to the downturn in new orders. 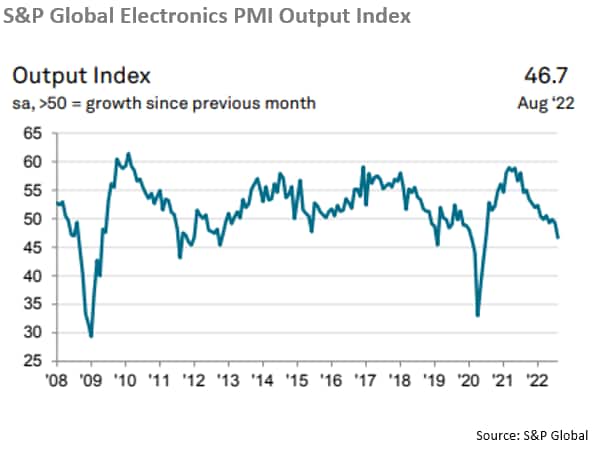 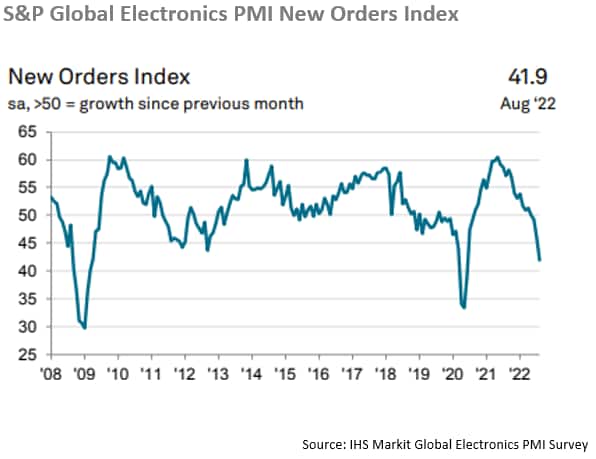 There were continuing pressures on global electronics supply chains during August, as signaled by the seasonally adjusted Suppliers' Delivery Times Index still well below the 50.0 no-change mark. However there has been a significant reduction in the number of delivery delays since the beginning of 2022, as supply conditions in the sector have gradually improved. 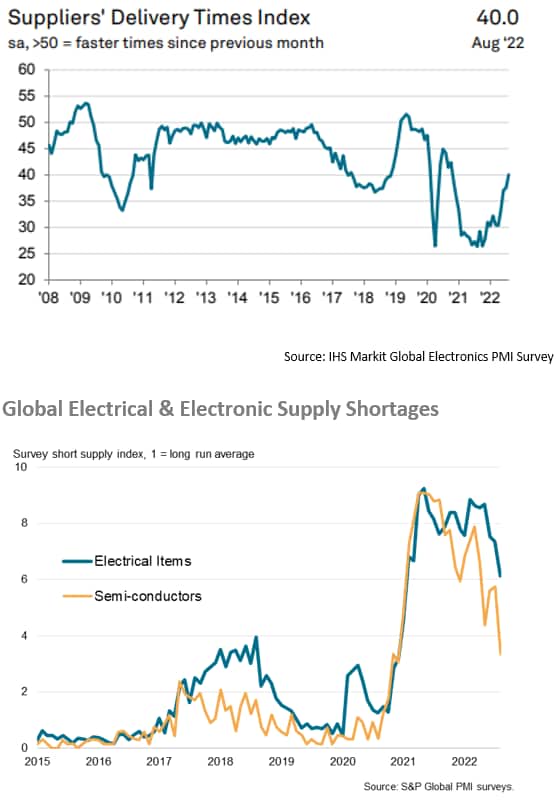 Although industry supply shortages for semiconductor and electrical products industries still remain far above their long-run average, these shortages have showed some signs of easing in recent months. 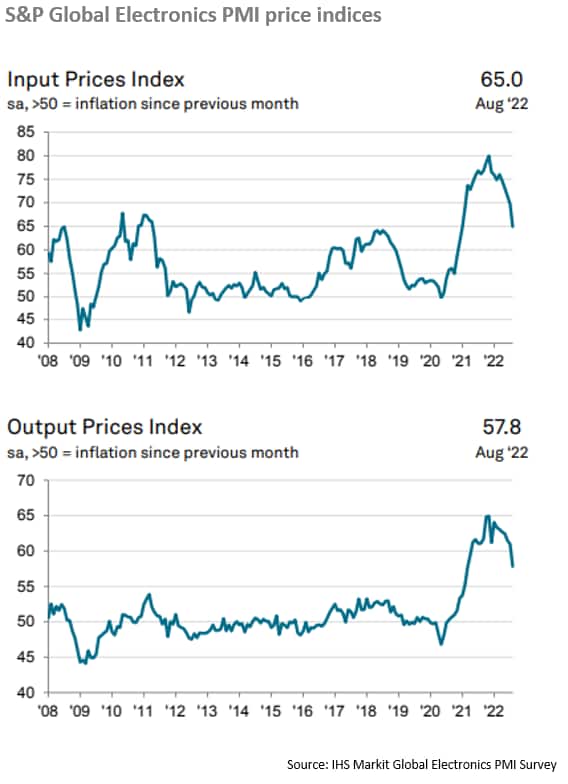 The near-term outlook for the APAC electronics industry is for increasing headwinds, as signaled by the most recent S&P Global Electronics PMI survey. Weakening growth momentum in the US and EU, combined with soft domestic demand growth in China, are weighing on electronics new orders. However, production backlogs for some key electronics products, notably semiconductors, will continue to provide support for electronics output during the remainder of 2022, albeit supplier delivery times are easing. Electronics output and new orders have been moderating in recent months, as slowing growth momentum in the key markets of the US and EU are increasingly acting as a drag on electronics new orders during the second half of 2022.

The medium-term economic outlook remains supportive for the electronics industry. With shortages of semiconductors disrupting manufacturing supply chains in 2021, the importance of having domestic electronics production capacity for critical electronics components has become a national priority for major industrial nations, including the US, EU and China.

For the US and EU, reducing reliance on Asian semiconductors production has become a key strategic priority over the next decade. The US CHIPS and Science Act, which was recently passed by US Congress and signed into law by President Biden, provides for USD 50 billion of government funding for increasing US domestic production of semiconductors. In the EU, the European Chips Act is expected to mobilize an estimated Euro 15 billion of public and private investments into semiconductors, with a total of Euro 43 billion of policy-driven investment into the EU semiconductors industry by 2030. India is also trying to establish a commercial semiconductor manufacturing sector, to reduce its heavy reliance on imported semiconductors.

The outlook for electronics demand is also supported by major technological developments, including 5G rollout over the next five years, which will drive demand for 5G mobile phones. Demand for industrial electronics is also expected to grow rapidly over the medium term, helped by Industry 4.0, as industrial automation and the Internet of Things boosts rapidly growth in demand for industrial electronics. Competition amongst leading technology nations in strategic electronics production has also intensified. Consequently, strategic global competition amongst the world's leading high-technology nations is also likely to play a greater role in reshaping the global electronics industry landscape over the next decade.