US and Europe report strong growth in June as Japan contracts

The US continued to lead the global economic rebound in June, according to flash PMI data from IHS Markit, but also showed signs of growth peaking from May's record expansion. The eurozone meanwhile was alone among the four largest developed world economies in seeing growth accelerate in June, while Japan fell into a deeper contraction amid emergency measures to curb COVID-19 infections.

While the US saw the strongest expansion, it once again reported by far the steepest increase in prices charged for goods and services, though price pressures continued to mount in Europe. 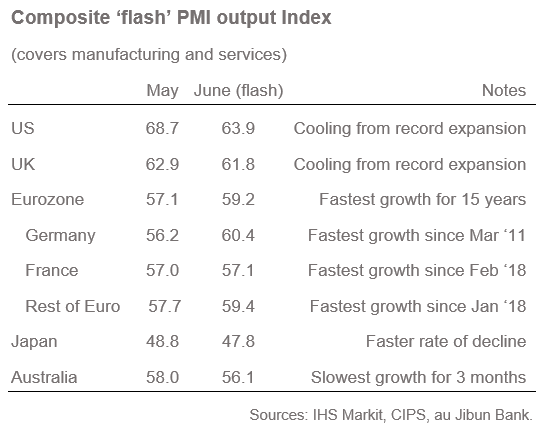 US and UK record expansions cool

Flash PMI survey data showed business activity rising strongly in the world's largest developed economies in June, the rate of expansion of output rising at a rate only slightly weaker than May's all-time high. Comparable data for these economies extend back to 2007, meaning the recent growth spurt has been the strongest recorded for at least 14 years.

For a second month running, services grew at a faster rate than manufacturing across these four economies, albeit with rates of expansion slowing in both cases compared to May.

Divergent trends were evident across the 'G4' largest developed economies, however, with growth rates cooling from record highs in the US and UK while Eurozone growth accelerated to the fastest for 15 years. Japan meanwhile contracted for a second successive month, the rate of decline accelerating to the steepest since January. 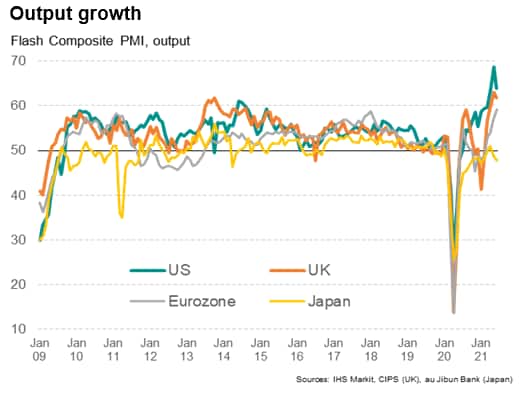 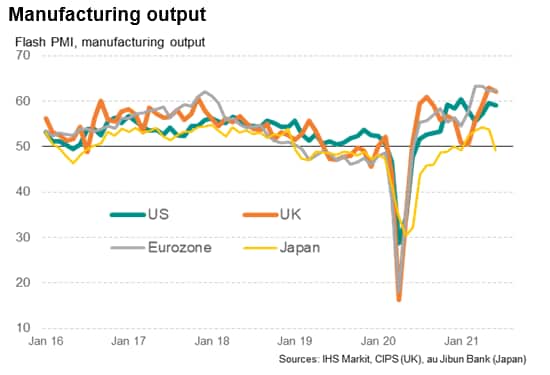 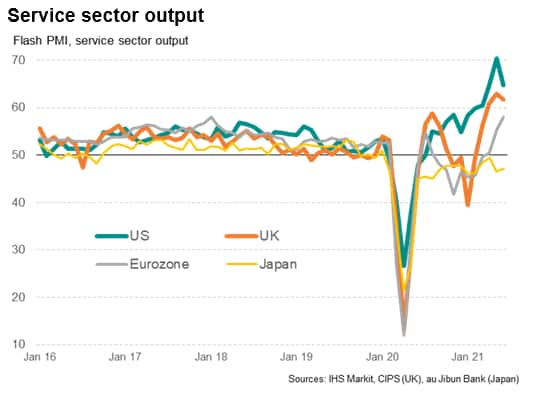 The growth disparities could to a large extent be accounted for by variations in COVID-19 waves and vaccinations rates.

Japan's renewed decline in the past two months has been widely attributed by companies to redoubled efforts to contain the virus, with containment measures rising again amid a fourth virus wave. Services were especially hard hit, though manufacturing also slipped back into decline as the impact of restrictions broadened out.

In contrast, especially strong growth rates in the US and UK were again buoyed by these economies - and notably their service sectors - continuing to be opened up from virus-related restrictions. Similarly in the Eurozone, looser COVID-19 containment measures propelled service sector growth to the fastest since 2007, helping the upturn spread further from the already-surging manufacturing economy.

While growth rates cooled in the US and UK, it should be remembered the former had seen by far the fastest growth in May ever recorded since IHS Markit PMI data were first available in 2009, and the latter's performance in May had been the best since at least 1998. Some moderation from these impressive rates should therefore not be seen as a disappointment, but does add to the view that the pace of economic growth in the UK and US likely peaked in the second quarter, whereas the Eurozone could see growth accelerate further into the third quarter. Note that, of these three economies, only the eurozone saw new orders inflows accelerate in June.

The slower growth in the US and UK was in part linked to short-term difficulties in sourcing sufficient inputs and staff. Likewise in the eurozone, and to a lesser extent Japan, supply shortages also impeded manufacturing performance. These supply shortages are tracked via the PMI's supplier delivery times index, the flash data for which showed lead-times lengthening at survey record rates in the US and eurozone during June, with a near-record worsening seen in the UK and an increasing rate of lengthening reported in Japan. 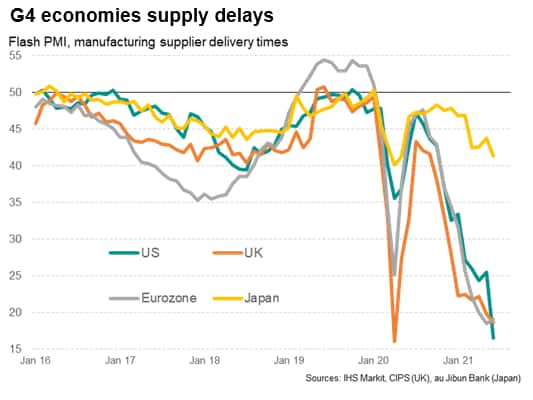 Record inflation in the US and Europe

Supply shortages continued to put pricing power in the hands of the seller, causing industrial prices to rise at survey record rates in the US, Eurozone and UK.

With service sector costs also being pushed higher by a combination of higher supplier prices, rising fuel costs and wage pressures, average input costs across the G4 economies rose in June at the fastest rate since comparable data were first available in 2009.

Prices in Japan meanwhile again rose only modestly by comparison in June as sellers continued to offer discounts to stimulate sluggish sales. 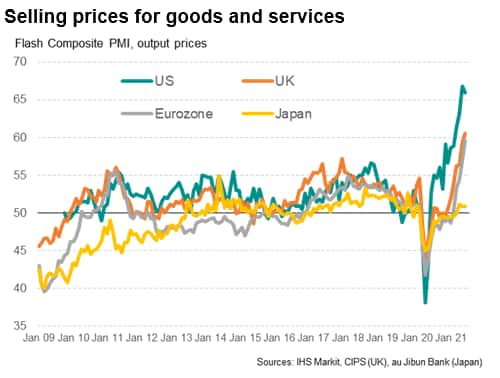 Many of the price pressures reflect pandemic-related disruptions, many of which should prove temporary. Employment across the G4, for example, is running behind output growth as firms struggle to find sufficient numbers of staff to meet the sudden rise in demand that has accompanied the opening up of economies, most notably in the US. This has pushed up pay growth in many cases.

Many material price rises have meanwhile reflected temporary supply chain disruptions emanating from the pandemic, including a lack of transport or container availability and port congestion due to COVID-19 restrictions. These have been exacerbated by record safety stock building in recent months, the impact of which should soon wane.

However, it remains uncertain how long these disruptions will persist for, especially if further virus waves threaten to disrupt supply chains in Asia, in particular. It also remains unclear how far labour participation rates have fallen, and for how long they might remain lower than before the pandemic, which could affect longer term pay trends. 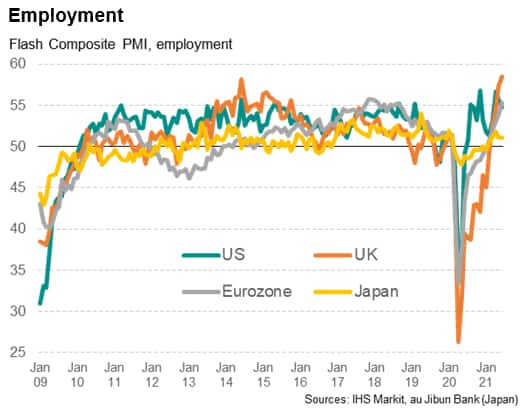