Record levels of the UK flash PMI survey's price gauges and the further development of capacity constraints hint strongly that consumer price inflation has much further to rise after hitting 2.1% in May.

Increasingly widespread supply shortages contributed to a further steep rise in manufacturing prices during June, which rose at the fastest rate ever recorded by the UK PMI survey, according to preliminary 'flash' data. Average supplier lead-times showed a near-record lengthening, leaving purchasing managers in factories facing a record increase in raw material prices as a result of the developing sellers' market for a wide variety of inputs. 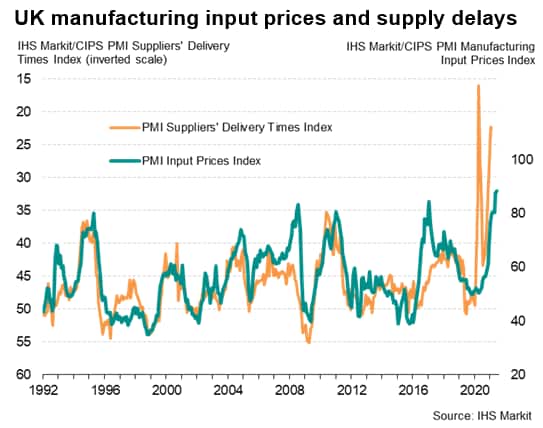 These higher costs were often passed on to customers, resulting in an unprecedented increase in average selling prices for goods leaving factories.

However, it was not just manufacturing prices that broke new records: average prices charged for services also posted a record increase. Higher services charges were often linked to added pricing power amid surging demand as well as a near record rise in costs, in turn linked to supplier price hikes, higher fuel prices and rising salaries. Measured across both manufacturing and services, the PMI's gauges of firms' input costs and average selling (output) prices hit the highest levels yet recorded by the surveys. To gain an overall view of developing inflation trends, a useful metric is an indicator derived from both price data and information on supply constraints. We therefore take an average of the PMI input cost index and the (inverted) suppliers' delivery times index. This amalgamated index is charted below against the annual rate of change of consumer price inflation in the UK. Note that this PMI price pressures gauge is charted with a six-month lead applied to illustrate its leading indicator properties. 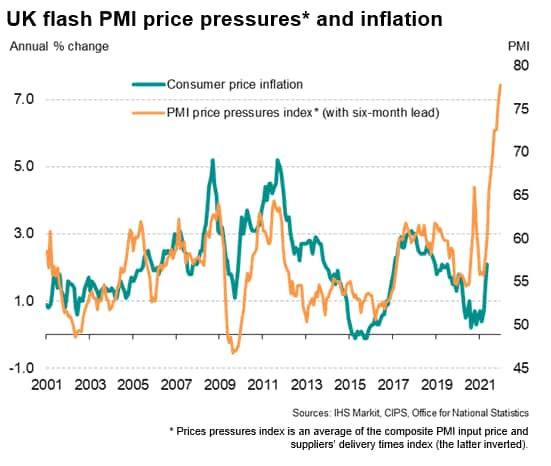 The recent PMI survey output, price and capacity indices are all running in elevated territories that would normally see policymakers making the case for some tapering of stimulus. However, while the Bank of England's Monetary Policy Committee is likely to err on the side of caution, awaiting clear signs that the economy remains on a strong recovery path beyond the initial stages of the rebound from lockdowns before adjusting policy, the strength of the PMI data will likely generate speculation as to whether more members will join the bank's Chief Economist Andy Haldane in calling for an earlier halt to the bank's asset purchases. 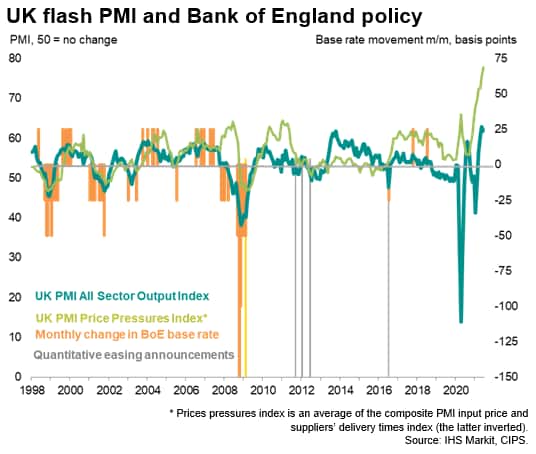