A further near-record increase in demand recorded by the PMI survey encouraged more companies to take on extra staff during June, driving the largest monthly rise in employment in the PMI survey's 23-year history.

The survey's composite Employment Index provides a reliable advance guide to the official employment data, which are published with a significant delay, and as such allows an early insight into changing labour market trends. The latest PMI data are broadly indicative of employee jobs growing at a quarterly pace of around 300k, underscoring the impressive upsurge in job creation. 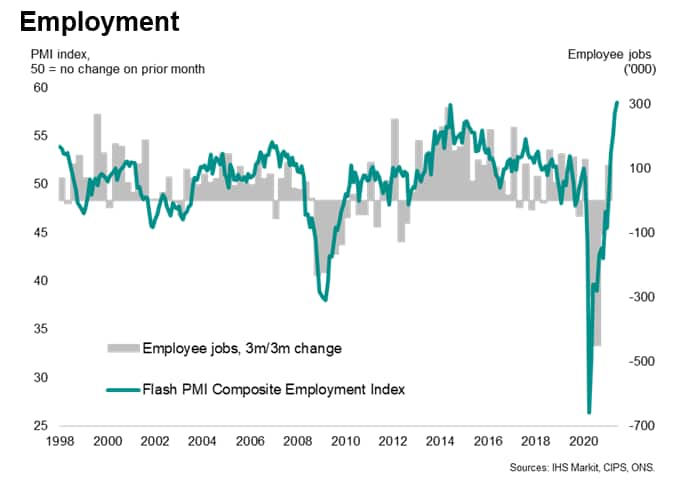 Strong jobs growth was recorded in both manufacturing and services. However, while jobs growth in the service sector accelerated to a rate just shy of the prior record seen in 2014, manufacturing payroll growth slowed, in part reflecting growing reports of difficulties in filling vacancies. Other manufacturers also reported a reticence to hire due to Brexit-related uncertainties, which were in turn often linked to a sharp slowing of export orders growth during the month. Food and drink manufacturers reported an especially steep decline in employment during the month. The largest increase in employment was meanwhile reported in the hospitality sector, with a surge in hiring reported in hotels and restaurants. 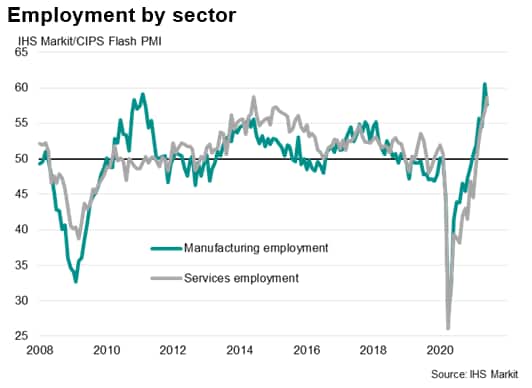 Despite the jump in employment, companies again reported difficulties in meeting the recent surge in demand, as measured by new orders, resulting in the largest accumulation of backlogs of orders yet recorded by the survey. 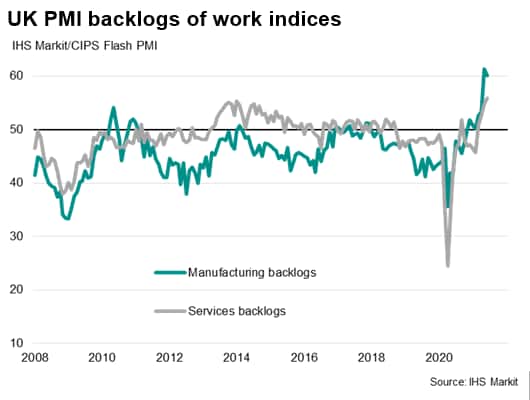 An especially steep build up in uncompleted orders was seen in manufacturing, though the service sector also reported an unprecedented accumulation of outstanding business.

Capacity constraints also reflected a further worsening of supply chains in June. Average supplier delivery times lengthened to a degree exceeded only once (last April) in the 29-year history of the manufacturing PMI survey as shortages of inputs became more widespread. Shortages were linked to suppliers struggling to meet demand, transport delays and Brexit-related logistical issues. 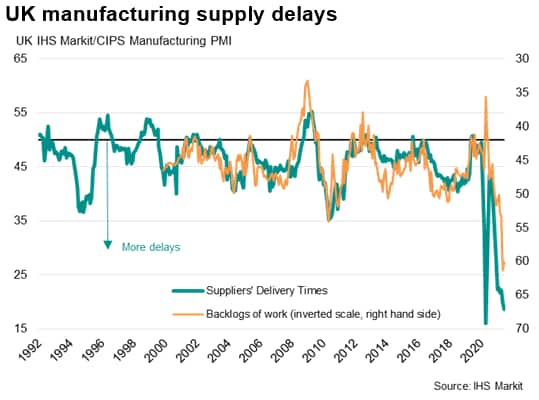 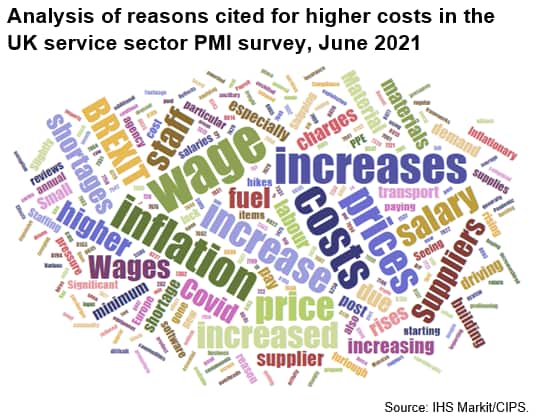 While the record increase in backlogs of work bodes well for the existing pipeline of order books to help sustain robust output growth in coming months, a concern is that the lack of available capacity alongside labour shortages and supply chain delays will add further to inflationary pressures. Labour shortages in particular have the potential to drive up wage growth, meaning any 'transitory' spike in inflation due to higher materials prices could prove stickier.

These capacity indicators will therefore need to be monitored carefully over the coming months.