The worldwide PMI surveys produced by IHS Markit hinted at a return of global economic growth in June. China led a broad-based improvement in the business survey data to add to signs that business activity is rebounding sharply since the height of the COVID-19 lockdowns in April. However, a V-shaped recovery remains far from certain, as demand will need to rise further and job markets remain resilient to prevent a renewed loss of momentum.

The JPMorgan Global PMI™ (compiled by IHS Markit) jumped by a record 11.4 index points in June, building on a prior record increase of just over 10 index points in May to push the index to a five-month high. Despite the rise, at 47.7, the PMI remained below the no-change 50.0 level to indicate a fifth successive monthly deterioration of output across the combined manufacturing and service sectors.

More encouragingly, when compared to official data, the strong improvement in the survey index in June is indicative of a return to annual GDP growth for the global economy for the first time since January. Whereas 50.0 means that the number of companies reporting higher output and lower output are in balance, an index reading of 46.7 is in fact the cut-off between global GDP rising or falling on an annual basis.

We use a linear regression to estimate the annual growth rate of GDP implied by the PMI. This model indicates that the annual rate of decline likely peaked at approximately 12% back in April at the height of worldwide COVID-19 related lockdowns, but that the relaxation of virus restrictions has helped drive a 0.6% annual rate of growth in June. However, even with the improvement in the data since April, the latest numbers still point to a second quarter downturn in GDP of a scale unprecedented in recent history. 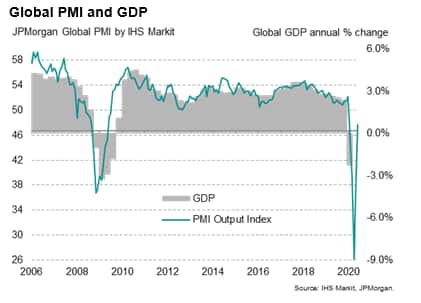 The direct link between coronavirus lockdowns and PMI readings is clearly illustrated both in terms of the easing in the global PMI alongside IHS Markit's COVID-19 Containment Index and the national performances relative to individual containment indices. These COVID indices take a basket of measures relating to the extent to which economies have been restricted by measures applied by government to control the spread of the pandemic, such as non-essential business closures, school closures and travel and mobility restrictions linked to social distancing policies.

The global average COVID-19 Containment Index has eased from a peak of 59 in April to 39 in June, and looks set to fall further to 31 in July as restrictions are further relaxed in many countries. 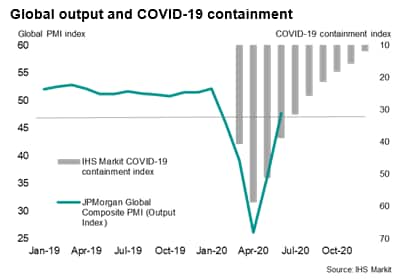 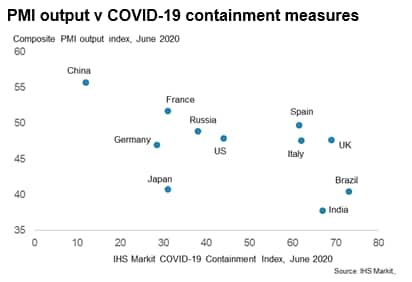 The June PMI data showed China leading the improvement, followed by France, with these two being the only large economies to register composite PMIs above the no change mark of 50. Both had relatively low COVID-19 containment indices in June.

However, all other major economies saw rates of contraction ease considerably compared to May, aligned with the broad-based relaxation of COVID-19 restrictions.

The data therefore suggest that all of the major developed and emerging economies saw the rate of contraction peak in April with marked improvements recorded in May and June as lockdowns were relaxed. The exception is China, where an earlier lockdown meant the rate of contraction peaked back in February, hence China's earlier lead in the recovery so far. China in fact reported the strongest rise in business activity since November 2010, led by an especially sharp improvement in the service sector which accompanied further manufacturing gains.

At the other end of the scale, the steepest downturns continued to be seen in India, Brazil and Japan.

While the severe persistent economic weakness in India and Brazil could be explained by above-average COVID-19 containment measures in June as these economies maintained their struggle against the virus, the disappointing trend in Japan is harder to explain by containment, but potentially reflects greater voluntary social distancing. Japan is also likely experiencing weakened demand due to last October's sales tax rise as well as its high exposure to global trade flows. 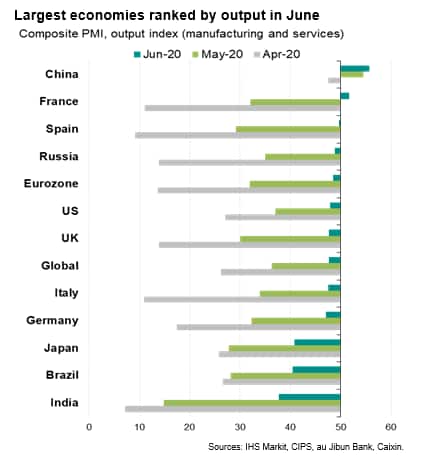 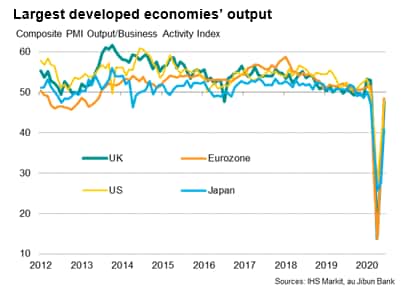 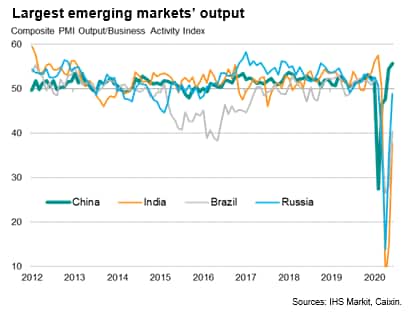 The global service sector saw output fall faster than manufacturing during the height of the lockdowns, largely reflecting the impact from social distancing policies, and has subsequently showed signs of the strongest rebound. The global services PMI activity index posted a record increase in points terms in June. However, the downward trend in manufacturing output has also moderated sharply since April, the factory output index also staged a record gain in June. Both sectors saw output indices rise to the highest since the downturns began in February. 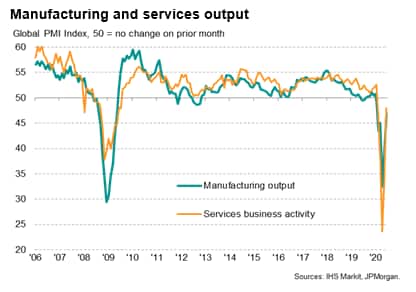 Output indices rose across the board, encompassing 26 manufacturing and service sub-sectors, in June, and drilling further into the sector detail shows the best performers were largely in line with expectations of a global economy emerging from lockdowns. Banking led the upturn as financial transaction grew, followed by real estate and construction materials, reflecting renewed property deals and building sites returning to work. Food and pharmaceuticals meanwhile continued to outperform, as has been seen throughout much of the pandemic. Not surprisingly, healthcare, food and pharmaceuticals have in fact seen the best overall performances since the pandemic hit the global economy in February.

At the other end of the scale, the steepest downturn in June was recorded in the tech equipment sector, though this in part reflected a relative higher base to improve from in May (having also been among the strongest performers during the pandemic). Tourism and recreation saw the second steepest decline, followed by non-banking financial and media.

Over the past four months, tourism and recreation, media and transportation have seen the steepest downturns, followed by commercial and professional services and auto makers. 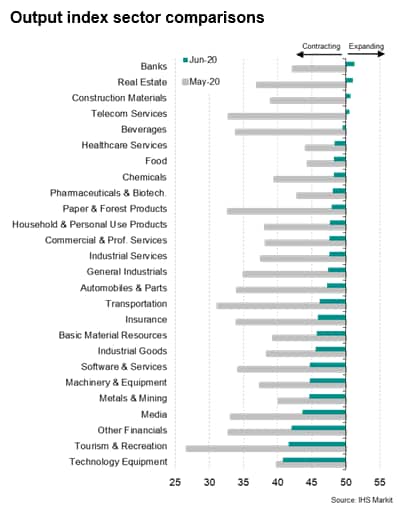 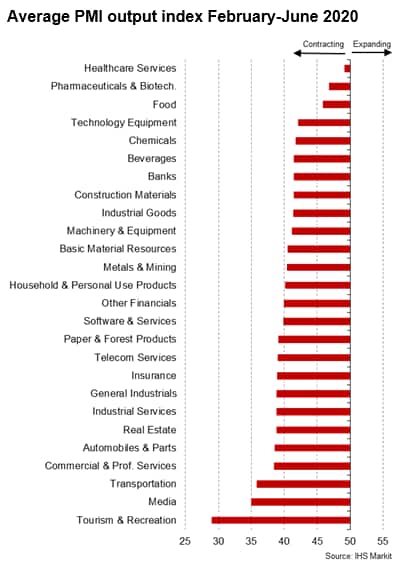 The strong and broad-based rise in the PMI data - both by country and sector - raises the question of whether the global economy is set for a V-shaped recovery, whereby the output lost to the pandemic is swiftly regained. Certainly the strong rebound in the PMI, and the model-based signals for a resumption of GDP growth strikes a more bullish picture than the current IHS Markit projections for GDP, which estimate that annual GDP growth will not resume until the first quarter of 2021. 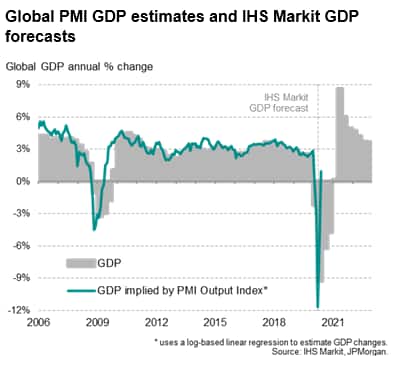 However, care needs to be taken when making comparisons with annual GDP data. The PMI asks companies to gauge month-on-month production trends, so will tend to change direction earlier than annual changes in GDP. After the global financial crisis, for example, the PMI signalled a return of annual GDP growth in June 2009, but it wasn't until the fourth quarter of 2009 that GDP actually rose above levels of year ago. We can therefore expect the recovery to lag that of the PMI, especially when measured in annual rates of change.

The current situation is also very different from prior global downturns. Although global PMI indicators of new business showed record gains in both manufacturing and services in June, a rebound from enforced closures of non-essential business and household lockdowns was only to be expected as operations restart. Companies have also reported that lockdowns have led to pent-up demand for certain goods and services which is now supporting business activity. 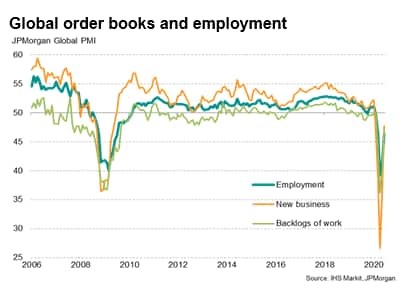 Quite how long this pent-up demand effect will last remain uncertain. Even with the rebound, the latest global new business indicators remain below 50, reflecting a situation where more companies reported a drop in new work than saw an improvement, hinting strongly at subdued underlying demand. Broader indicators of global trade from the manufacturing PMI surveys also showed exports continuing to act as a particular drag on the global economy, leaving many economies reliant on domestic demand to drive growth.

The big question is therefore whether the demand indicators will continue to improve beyond the initial rebound from the lockdowns, and in particular how employment will hold up when support measures are removed. Encouragingly, the rate of global job losses eased for a second successive month in June. Business expectations for the year ahead have almost recovered to levels seen earlier in the year. Whether these positive trends continue will ultimately depend on central bank and government policy support, and also of course on the absence of a renewed upward trend in COVID-19 infections. Any renewed faltering of the PMIs in coming months will flash warning signs of a W- rather than V-shaped recovery.