Over the course of 2020 the PMI data have tracked the economic fallout from the coronavirus disease 2019 (COVID-19) pandemic around the world, and going forward will show which economies are able to recover quickly and which remain under pressure. This note looks back on an unprecedented period for the PMI surveys.

The first cases of COVID-19 were identified around the start of 2020, and by the end of January the severity of the outbreak in China was becoming clear. On January 30th, the World Health Organisation (WHO) declared the outbreak a Public Health Emergency of International Concern, with the authorities in China and elsewhere in the region implementing lockdown measures to try to limit the spread of the virus.

The impact of shutting down large swathes of the economy was swift and dramatic. PMI data for Mainland China and Hong Kong SAR plunged to record lows, with other PMIs in the region also pointing to economic weakness. Outside of Asia, however, PMI data generally remained in growth territory (see Map 1).

Any illusions that the spread of COVID-19 was going to be restricted to Asia were quickly dashed during March as the epicentre of the virus moved to Europe. The WHO declared a global pandemic on March 11th, with lockdown measures implemented in a range of economies over the course of the month. A number of PMI surveys saw record rates of decline in output during March, but worse was to come in April, as illustrated in Map 2. 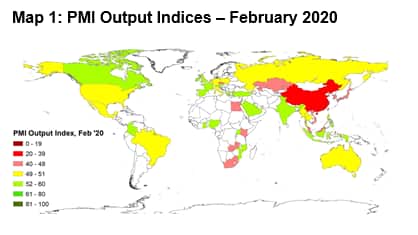 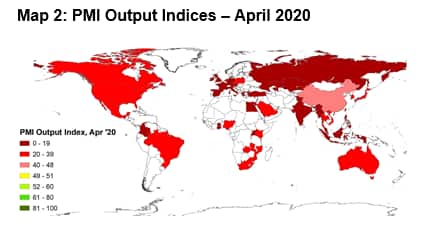 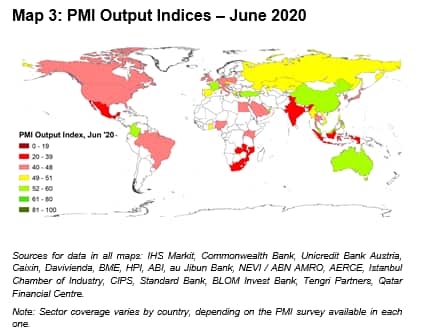 Of the 45 countries for which IHS Markit PMI data are available, 41 saw business activity fall at an unprecedented rate in April as COVID-19 engulfed the global economy. Some of the rates of contraction seen would have been unimaginable just weeks earlier, with those countries with the strictest lockdowns registering the steepest declines. In fact, India, Spain and Uganda all saw output index readings in single figures, something never seen before in the near-30-year history of IHS Markit's PMI surveys.

By April, however, Mainland China was out of lockdown, with output nearing stabilisation as the economy reopened.

May saw the epicentre of the pandemic move again, with the WHO stating on May 22nd that South America was now the main area of concern. This meant further severe declines in output in economies such as Brazil, as well as other countries around the world where lockdowns were yet to be loosened. PMI data for Qatar, South Africa and Zambia even signalled new record contractions in output during the month, with worries around the health infrastructure in sub-Saharan African countries leading to particular caution in the easing of restrictions there.

Much of the world was in easing mode by this stage, however, and the PMI data signalled much softer reductions in output accordingly for almost all countries during May. A notable exception was Mainland China, where the PMI was now already back in positive territory, posting solid growth.

June PMI data has seen progress continue, with recoveries underway in a number of countries (see Map 3). Ten countries saw outright increases in output during June, with almost all the others recording slower declines than in May. That said, some economies remained in a deep downturn, including India, Indonesia and Mexico.

The latest release of the J.P.Morgan Global Composite PMI showed the global economy moving closer to stabilisation in June, with the rate of decline in business activity easing sharply to the slowest in five months. The data suggest that a gradual recovery from the COVID-19 crisis has begun. 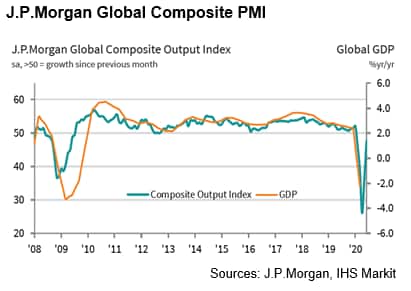 Mainland China backed up solid growth in May with an accelerated expansion in June. Encouragingly, the rise in the output index in China for the two months following its nadir has been at least matched by other economies over the April to June period. This provides hope that the path back to growth followed by China so far can be matched elsewhere, with rates of expansion picking up in July and August. 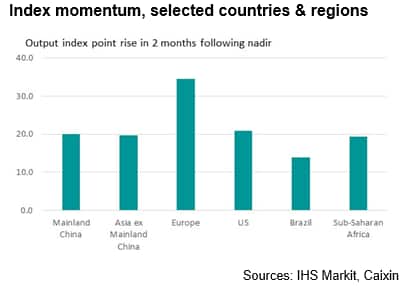 Recoveries are of course dependent on COVID-19 being brought under control, however, and this is far from the case in a number of countries which have nevertheless been easing restrictions. Brazil, for example, has seen less of a rebound in its output index as the virus remains widespread in the country. Meanwhile, other areas are seeing restrictions re-imposed amid signs of the number of cases picking up again, potentially bringing economic recoveries to a halt.

Even where growth can be sustained during the second half of 2020, the economic scars left by the pandemic will take some time to heal. Between February and May, all but two of the 45 countries covered by IHS Markit PMI data saw record declines in output. The only exceptions were Taiwan and South Korea whose manufacturing sectors suffered greatly during the global financial crisis and saw their nadirs occur then.

With fingers on the economic pulse of every region across the world, the PMI surveys will track where recoveries take hold and where setbacks are experienced. The next data release will be flash data for July, published on July 22nd (Japan) and July 24th (Australia, France, Germany, Eurozone, UK, US).