The release of the au Jibun Bank Japan flash PMI, compiled by S&P Global, on the 24th of November will be highly anticipated following October's PMI survey data, which signalled a growing divergence in output trends between Japan's manufacturing and service sectors. Activity levels at service sector firms improved in October, with companies reportedly benefitting from the recent improvement in tourism amid the introduction of a nationwide travel discount scheme. Meanwhile, manufacturing output contracted for the fourth month running, with performance reportedly hampered by intense global inflationary pressures. 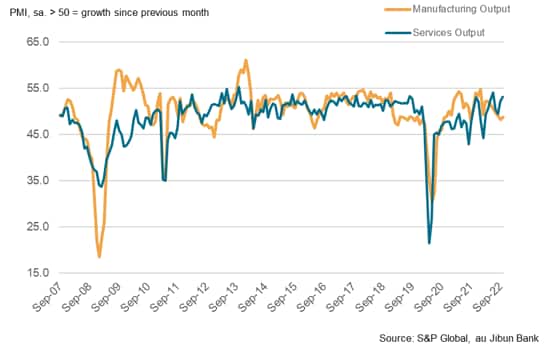 Business activity at Japanese service providers expanded for the second consecutive month in October, according to the latest au Jibun Bank PMI data, compiled by S&P Global, with the latest improvement the second-strongest since August 2019 (after June 2022). Central to the uptick has been the support measures targeting Japan's tourism sector, namely the National Travel Discount Programme - a government-led initiative with the goal to boost activity within the tourism industry. Through the subsidisation of transportation and accommodation costs (with discounts of up to 40% being offered), the programme aims to promote domestic travel and service sector growth following a tough few years in which the industry has suffered from the outbreak of COVID-19. Other areas of the service sector are also likely to benefit from the campaign, with coupons for local restaurants and attractions also being made accessible to domestic travellers. 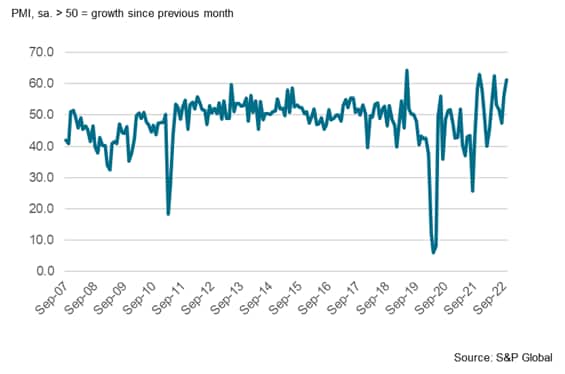 The recent roll-out of the nationwide travel discount scheme became an over-arching theme within the anecdotal evidence gathered in the services PMI survey in October. Panel members frequently suggested that the government-led campaign was pivotal in supporting inflows of new business. With the latest Japan services PMI headline figure solid, the nationwide travel subsidy programme looks to be having some of the desired effect on the Japanese service sector and it will be important to monitor any further developments within the industry up until the campaign is scheduled to finish (December 20th).

Other tailwinds supporting service sector growth include the sustained recovery from the COVID-19 pandemic. Japan has joined many other areas of the world in its approach to the COVID-19 pandemic, where the country is now moving towards living with the virus. All pandemic-related restrictions on the nation have now been lifted, with the reopening of foreign borders on October 11th also likely to provider a further boost to the tourism industry.

The outlook for service sector firms

Overall business sentiment among Japanese service sector companies improved in October and was among the strongest in the survey's history. Survey respondents frequently cited hopes for a sustained recovery from the pandemic, improvements in demand conditions and a further recovery within the tourism industry. 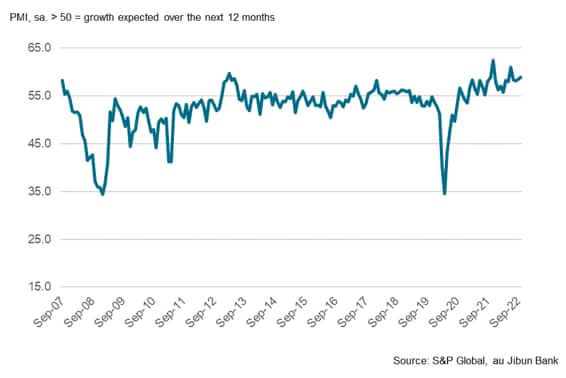 Trends are not mirrored in Japan's manufacturing sector

In contrast to the service sector, manufacturing companies in Japan have continued to struggle in the face of severe inflationary pressures. October saw steep price increases weigh on demand for goods. Rates of input price and output charge inflation were among the sharpest on record and reportedly underpinned a fourth consecutive fall in total new orders. With the ongoing energy crisis and concerns that intense inflationary pressures will persist, Japanese manufacturing firms are likely to continue to face challenging conditions in the months to come. 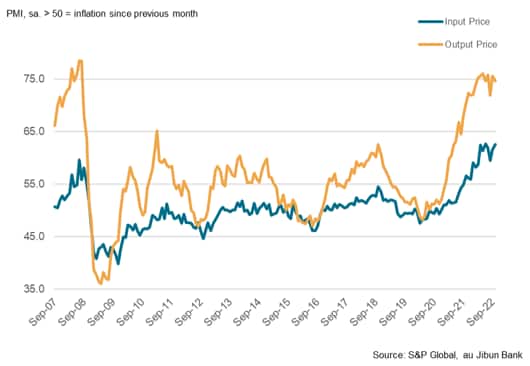 The au Jibun Bank Japan Flash PMI for November will be released 24th of November.