Weaker than expected PMI numbers in January underscore the risk of the UK slipping into recession. Industrial disputes, staff shortages, export losses, the rising cost of living and higher interest rates all meant the rate of economic decline gathered pace again at the start of the year. Jobs also continued to be lost as firms tightened their belts in the face of these headwinds, though many other firms reported being constrained by an ongoing lack of available labour.

There were some bright spots in the survey, including improved business expectations for the year ahead and a further cooling of inflationary pressures. The overall rate of decline indicated also remains only modest. But this is undeniably a disappointing start to the year for the UK, reflecting not just short-term hits to growth such as strike action and the rise in energy costs due to the Ukraine war, but also highlighting the ongoing damage to the economy from longer term structural issues such as labour shortages and trade woes linked to Brexit.

UK business activity fell for a sixth consecutive month in January, according to the flash PMI survey data compiled by S&P Global and sponsored by CIPS, with the rate of decline accelerating to one of the fastest recorded since the global financial crisis. 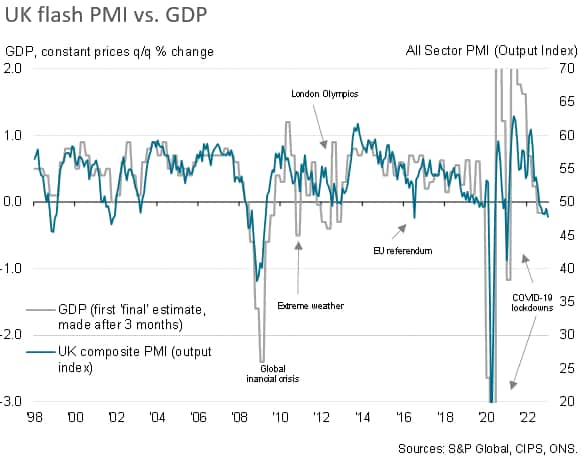 The composite PMI fell from 49.0 in December to 47.8 in January, defying consensus expectations of a rise to 49.3 and registering the steepest contraction since January 2021. However, if pandemic lockdown months and the initial EU referendum shock are excluded, the PMI is still signalling the steepest economic contraction since early 2009. On the other hand, the downturn signalled remains only modest, certainly in comparison with the global financial crisis, with the latest reading consistent with GDP falling at a quarterly rate of 0.3% after a modest 0.2% contraction was indicated for the fourth quarter of 2022.

By sector, manufacturing continued to report the steeper downturn. Factory production fell for a seventh successive month, though the monthly decline was the smallest seen since last July. However, while a more modest contraction was seen in the service sector for a fourth successive month, the rate of deterioration accelerated to the highest for two years. 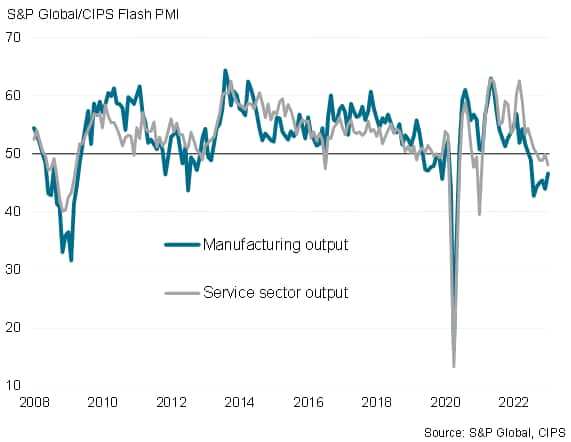 In more detail the only major manufacturing sector to report any growth was food & drink production, though all sectors (bar the small "other manufacturing" subsector) saw falling exports, often blamed on the adverse effect of Brexit alongside cooler demand growth in overseas markets. In the service sector, particular weakness was recorded among consumer-facing firms and within transport. Strike action added to the headwinds faced by some companies, which include the recent surge in the cost of living and higher borrowing costs, notable in the mortgage market, as well as persistent staff shortages.

There was some mildly brighter news from two forward-looking survey gauges. First, although inflows of new business fell for a sixth straight month, the decline was only slight and the smallest seen for five months, hinting that the recent downturn in demand is moderating. Second, business optimism for the year ahead jumped higher, continuing to rebound from the Truss-Kwarteng "mini-budget" low seen last October to reach its highest since last May. Optimism stemmed from improved economic management of the economy compared to the autumn, as well as signs that inflation is peaking.

Although both new orders and future output expectations gauges remain low by historical standards, the improvements in January suggest that the downturn in business activity could moderate in February. 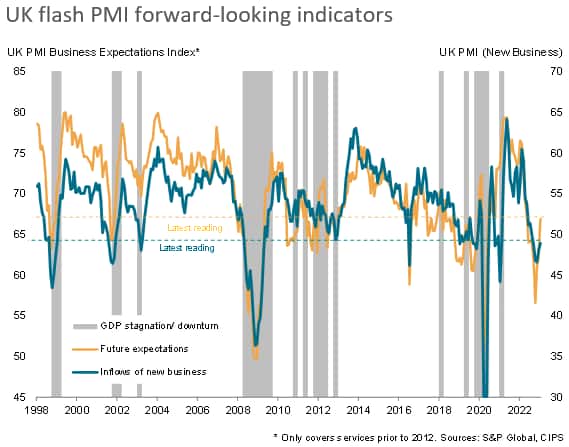 The uplift in business confidence and evidence of the demand downturn cooling helped stem the rate of job losses. Although employment across manufacturing and services fell slightly for a second month running in January, contrasting markedly with the near-record jobs growth seen in early-2022, the latest decline was only very marginal. 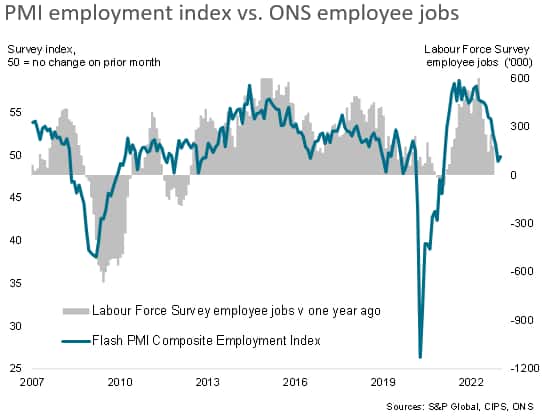 A fourth month of job shedding in manufacturing, albeit at a slightly reduced rate, was accompanied by near-stagnant headcounts in the service sector.

The January surveys also brought some further encouraging news on inflation, with average input costs across both manufacturing and services rising at the slowest rate since April 2021. This slower cost growth fed through to the weakest rise in average selling prices for goods and services since August 2021, and should help bring consumer price inflation down further from the 10.5% annual rate seen in December. 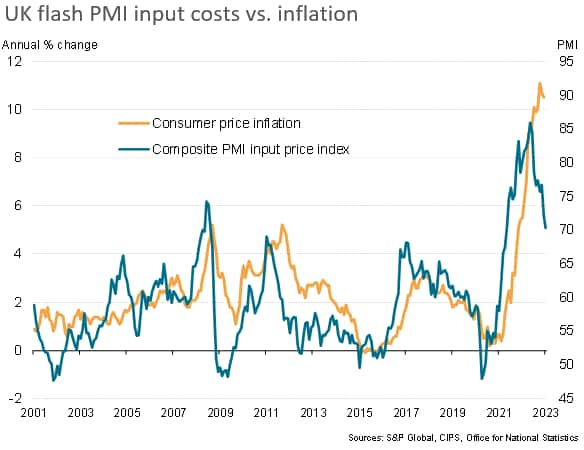 The rate of inflation of goods leaving the factory gate in fact accelerated slightly during the month, in a reminder that upward forces on inflation persist. In particular, supplier delivery times continued to lengthen in January, albeit at a slower rate, and energy prices continued to exert upward pressure on costs.

Nonetheless, the bottom line from the survey data is that overall inflationary pressures have cooled sharply since peaking eight months ago, which has now fed through to two consecutive months of softer consumer price inflation readings and should help bring more good news on inflation in the coming months.

The January data underscore how a UK recession cannot be ruled out. Although the rate of decline signalled remains modest, and there are some encouraging signs from the forward-looking indicators, it's clear that economic activity remains very subdued amid the headwinds of the cost-of-living crisis and tightening monetary policy, the impact of which is becoming increasingly evident not just in the battle against inflation but also by adding to recession risks. 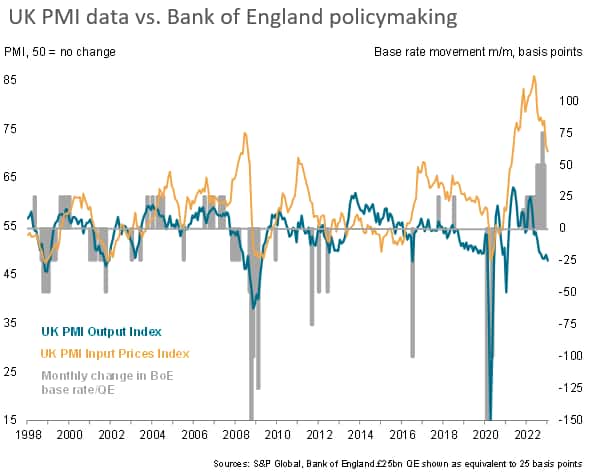 © 2023, IHS Markit Inc. All rights reserved. Reproduction in whole or in part without permission is prohibited.