The start of 2023 saw eurozone business activity rise marginally, according to flash PMI data from S&P Global, showing a tentative return to growth after six successive months of decline. Business confidence jumped higher to hint at markedly improving prospects for the year ahead, with order books meanwhile showing reduced rates of contraction. Employment growth also picked up momentum as firms prepared for a better than previously expected year ahead.

The combination of stabilising output and stubbornly high price pressures will add to speculation of further aggressive policy tightening by the ECB.

A steadying of the eurozone economy at the start of the year adds to evidence that the region might escape recession. The S&P Global 'flash' Eurozone PMI® Composite Output Index rose for a third consecutive month in January, up from 49.3 in December to 50.2 in January, breaking above the 50.0 no-change level to thereby indicate the first expansion of business activity - albeit only marginal - since last June. 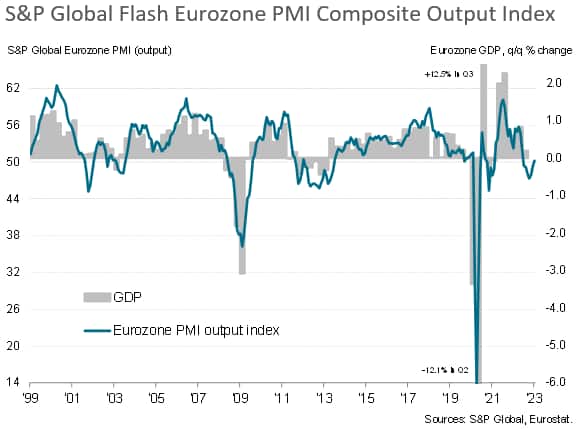 The survey therefore suggests that a nadir was reached back in October, since when fears over the energy market in particular have been alleviated by falling prices, helped by the warmer than usual weather and generous government assistance. At the same time, supply chain stress has eased, benefitting producers most notably in Germany, and more recently the reopening of the Chinese economy has helped to restore confidence in the broader global economic outlook for 2023, propelling business optimism sharply higher.

January saw service sector activity rise for the first time since last July (the services business activity index rose from 49.8 to 50.7) while manufacturing output contracted only modestly (the index up from 47.8 to 49.0), registering the smallest drop in factory production since last June. 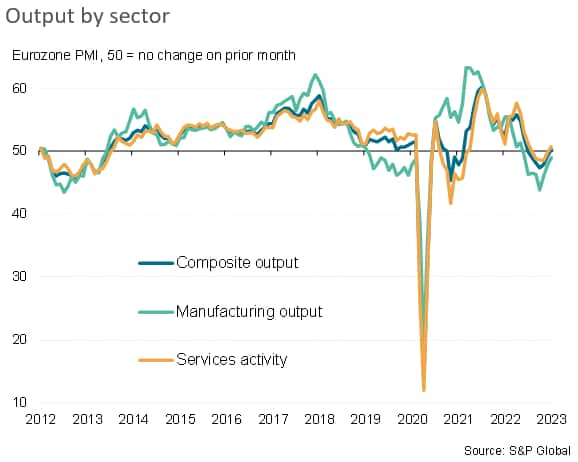 Growth was driven by technology (both IT services and equipment), as well as healthcare and pharmaceutical sectors, though industrial services also rebounded into growth territory. However, downturns also eased in financial services, notably including real estate, and in basic resources sectors, while consumer-facing sectors such as tourism and recreation and household goods showed signs of stabilising after several months of decline.

The marginal return to growth of output across the eurozone as a whole was accompanied by a sharp improvement in optimism about the year ahead. January saw the largest monthly increase in the eurozone PMI composite business expectations index since June 2020, building on gains seen in the prior three months to push confidence to its highest since last May.

Some encouraging news regarding near-term prospects was also provided by the survey data on order books. Although new orders fell for a seventh straight month, the decline was the smallest recorded over this period. New business placed at service providers fell only marginally while new orders for manufactured goods decreased at the slowest rate since last May, albeit still declining sharply. 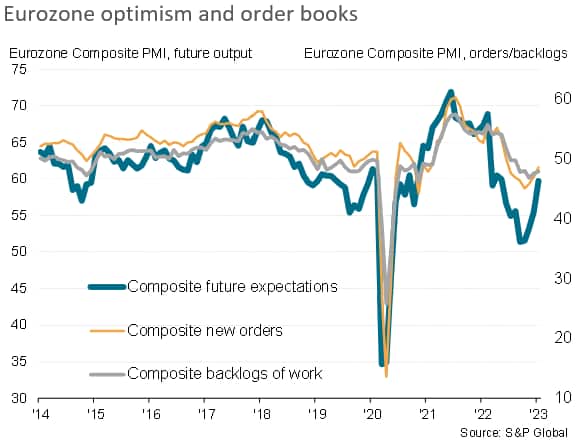 Companies met this brightening of business prospects and moderating decline in demand with additional hiring. Employment rose at the fastest rate for three months in January, accelerating in both manufacturing and services, albeit with the rate of job creation remaining much weaker than seen this time last year. 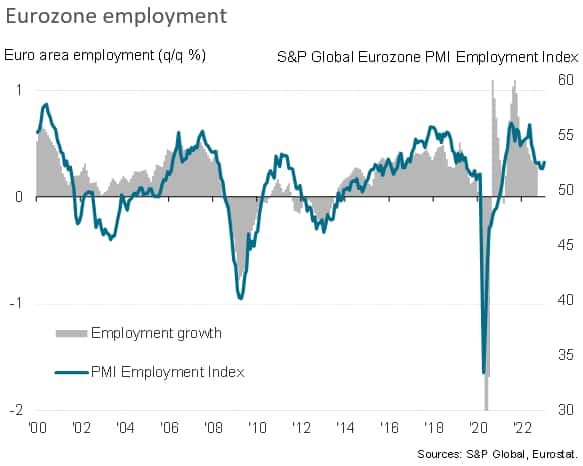 Supply chain stress has eased in part due to falling demand for inputs, which declined steeply again in January (though to a lesser degree than in each of the prior three months), which in turn is linked to a developing shift away from inventory building to inventory reduction. Both stocks of factory inputs and finished goods fell in January, dropping for the first times in 16 and eight months respectively. 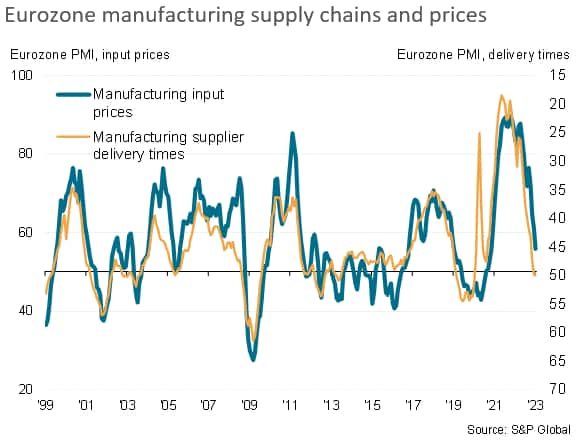 Although input cost inflation slowed, average prices charged for goods and services rose at a slightly steeper rate than in December, with rates of inflation edging higher in both manufacturing and services. While in both sectors the rates of increase remained off recent peaks, the sustained upward pressure on selling prices in part reflected efforts to rebuild margins, notably in the face of historically high energy and other raw material costs, as well as growing staff costs. 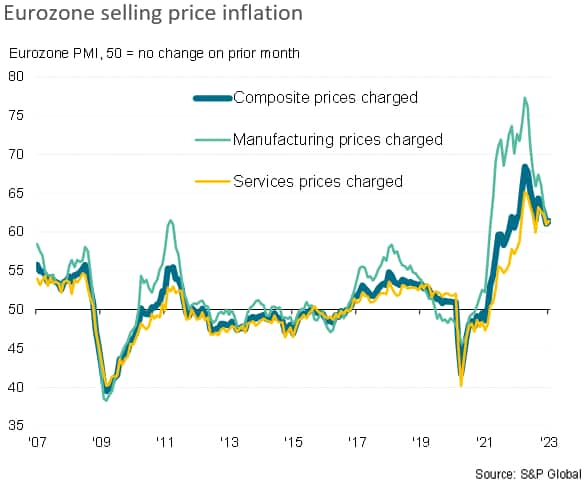 The region is by no means out of the woods yet, however, as demand continues to fall - merely dropping at a reduced rate - with an especially steep fall still being seen in the manufacturing sector. The upturn in the rate of inflation of selling prices for both goods and services will meanwhile add encouragement to the hawks to push for further monetary policy tightening. The case for higher interest rates is fuelled further by the upturn in employment growth recorded during the month and signs of higher wages driving the latest upturn in price pressures.

© 2023, IHS Markit Inc. All rights reserved. Reproduction in whole or in part without permission is prohibited.