October's flash PMI data indicated that the Australian economy returned to contraction following eight straight months of growth. On the other hand, Japan's expansion accelerated at the start of the fourth quarter, powered by improvements in the service sector as the economy reopened.

Despite the two APAC economies diverging in terms of performance, some common themes including higher inflationary pressures and lower business confidence lingered, highlighting two worrying trends to track with the PMIs in the months ahead.

The latest flash PMI data showed that Australia's private sector economy shrank for the first time since the start of the year in October. The S&P Global Flash Australia Composite PMI slipped to 49.6 from 50.9 in September (final reading).

Deteriorating business activity was primarily attributed to the poorer performance in the service sector, where demand contracted at the fastest pace since September 2021. Survey respondents reflected that the recent rises in interest rates and the heightening of economic uncertainties have led to a more cautious attitude towards the demand for services in Australia. Growth of the Australian manufacturing sector meanwhile persisted in October but had also softened, according to the latest readings. 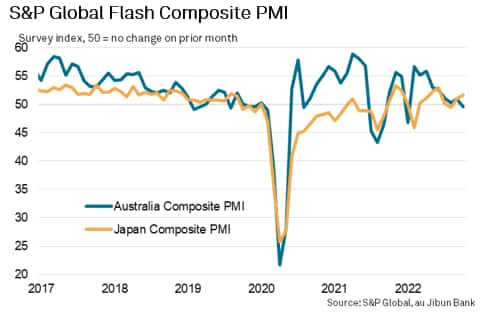 Meanwhile the au Jibun Bank Flash Japan Composite PMI (compiled by S&P Global) showed the Japanese economy expanding for a second straight month in October and at the strongest pace in five months. Faster service activity growth powered the expansion of the private sector as the easing of international border restrictions and the launching of the Nationwide Travel Discount Programme supported the service sector in October. Foreign demand for Australia services notably grew at a solid rate and may continue to show improvements in the months to come, having fully reopened to tourists only from October 11. 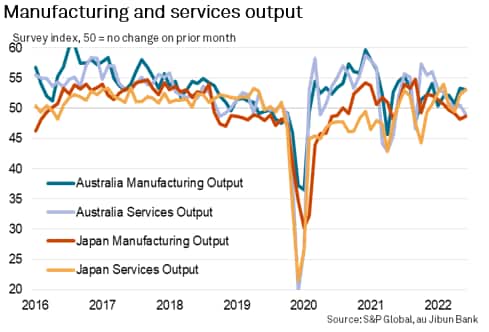 Price pressures persist for APAC economies according to flash PMIs

While Australia and Japan saw diverging trends in terms of private sector output performance, common themes exist such as of the persistence of price pressures that continue to pose risks to any economic recovery.

Both input costs and output prices remained on the rise at the start of the fourth quarter. While input cost inflation in both Australia and Japan showed signs of easing from the previous month, it failed to translate to lower selling price inflation. Instead, output prices climbed at faster rates in both Australia and Japan during October to pose risks to both economies. This is an especially worrying trend given the potential to further corrode demand directly through higher costs, and also indirectly in the case of Australia via the Reserve Bank of Australia's (RBA) reaction in lifting interest rates. 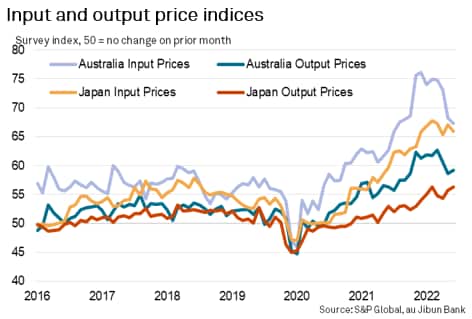 Supply delays continue to ease at the start of Q4 2022 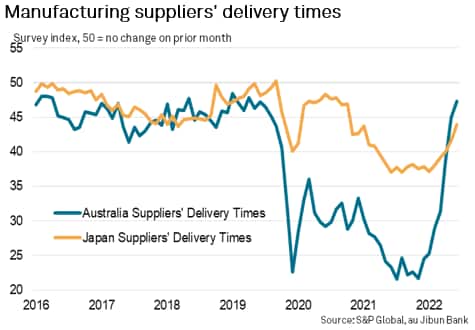 While price pressures appear persistent, there was at least some good news in that supply bottlenecks continued to ease according to the latest suppliers' delivery times indices from the October flash PMIs. Suppliers' delivery times lengthened at the slowest pace since August 2019 and February 2021 for Australia and Japan respectively.

Although the shortening of supply delays appears to be good news at first glance, boding well for the inflation trend, assessment of other PMI sub-indices such as the new orders index suggest that relatively lower demand continued to play a key part and does not spell altogether good news here. Demand growth in Australia's manufacturing sector remained well below the 12-month average in October, while incoming new orders for Japan's manufactured goods contracted for a fourth straight month. Therefore, even though the easing of supply constraints should further support production, the lack of demand poses a bigger challenge. As greater economic uncertainty looms, and as most central banks around the world continue to raise rates into a decelerating growth environment, there looks to be little to support a reversal of the trend at the moment.

Amid the array of challenges for private sector firms, business confidence deteriorated in the latest October flash findings. The Future Output Index fell in both Japan and Australia to the lowest since April 2022 and April 2020 respectively, the latter being the height of the COVID-19 pandemic. Anecdotal evidence suggested that firms were concerned with growing economic uncertainties and the risks of recession upon sales. Australian firms were further bogged down by the prospects of higher interest rates weighing on demand.

The Future Output Index is the only sentiment indicator among the PMI sub-indices. Given the usefulness of the indicator in measuring business confidence and providing an indication on future developments, the latest figures suggest that the current economic slowdown may continue in the coming months. 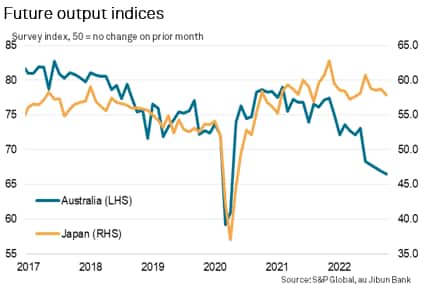