October's flash PMI data showed the pace of economic decline gathering momentum after the recent political and financial market upheavals. The heightened political and economic uncertainty has caused business activity to fall at a rate not seen since the global financial crisis in 2009 if pandemic lockdown months are excluded. GDP therefore looks certain to fall in the fourth quarter after a likely third quarter contraction, meaning the UK is in recession.

Business confidence has meanwhile collapsed, sliding to a level rarely seen before in 25 years of survey history, meaning companies are becoming increasingly nervous about the outlook. As night follows day, investment and employment will suffer in the months ahead as companies adjust to the challenging environment. Hiring is already slowing sharply, with manufacturing even shedding workers.

While the economic downturn has led to reduced upward pressure on prices, the weak pound and high energy costs meant that input cost inflation remains higher than at any time in the survey's history prior to the pandemic. The resulting elevated, albeit easing, price pressures look set to drive the Bank of England into further aggressive interest rate hikes. On top of the collapse in political stability, financial market stress and slump in confidence, these higher borrowing costs will add to speculation of a worryingly deep UK recession. 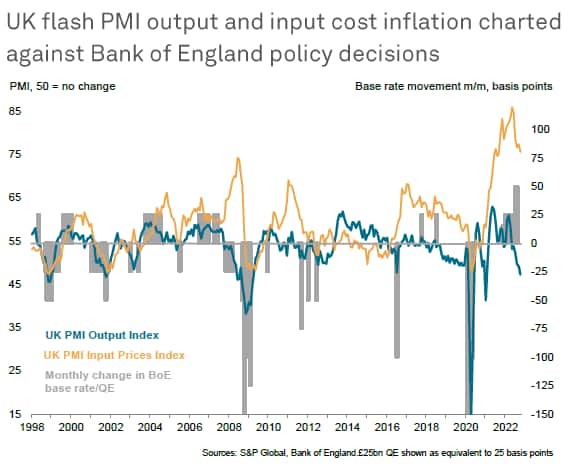 Business activity fell for a third month running in October, according to the flash PMI survey data compiled by S&P Global and sponsored by CIPS. The rate of decline accelerated to the fastest since January 2021. More importantly, if pandemic lockdown months are excluded, the decline was the steepest since the height of the global financial crisis in March 2009.

Comparisons with GDP indicate that the latest PMI reading is broadly consistent with the economy contracting at a quarterly rate of 0.4%. 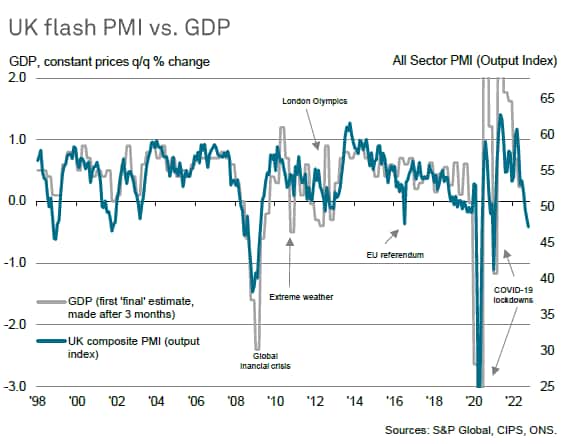 The downturn has also broadened out: while manufacturing output fell for a fourth successive month, October saw service sector activity fall for the first time since the lockdowns of early 2021. Both sectors are seeing output fall at rates rarely exceeded over the past decade barring COVID-19 lockdown periods.

All major subsectors of the services economy reported falling output except computing and IT, with the steepest downturns evident in consumer-facing sectors such as hotels, restaurants and leisure, though with October data also seeing financial services reporting a notably sharp contraction of activity. 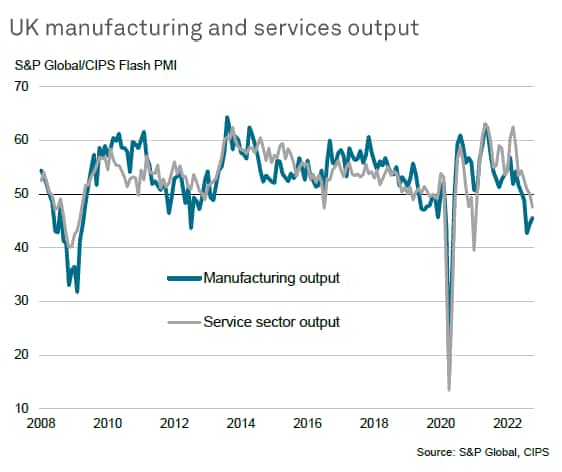 The October flash survey data were collected just prior to the resignation of the Prime Minister Liz Truss, but followed the botched 'mini budget', which led to financial market turmoil and a broad-based downgrading of the UK's economic prospects.

The uncertainty and upheaval caused by the political events in recent weeks have pushed businesses' expectations about their output in the year ahead to the lowest since the global financial crisis, barring the initial pandemic lockdown of early-2020, indicating a steep loss of confidence in the business outlook.

A further harbinger of tougher times ahead was an accelerating loss of new orders, which fell in October at the sharpest rate since March 2009 if lockdown months are excluded, reflecting an increasingly severe downturn in demand for both goods and services. 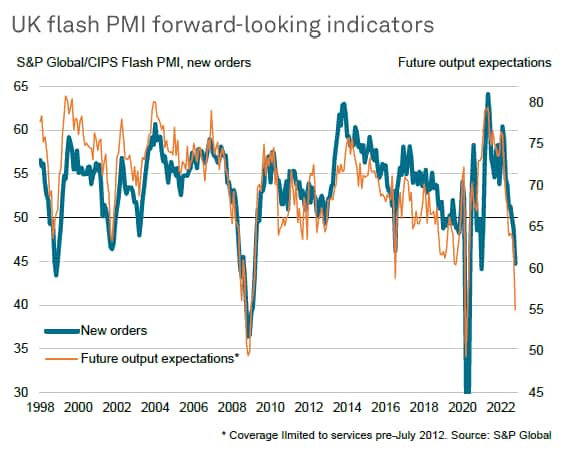 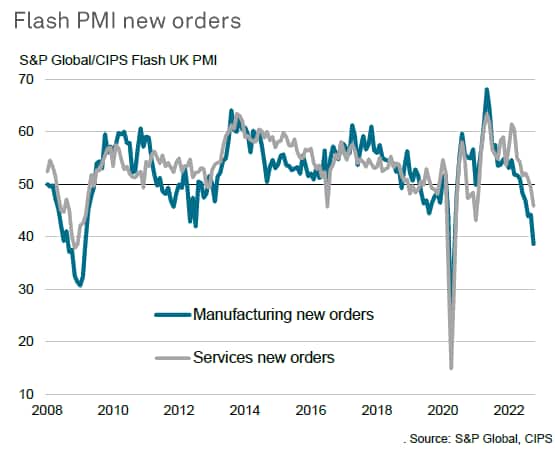 Historical comparisons underscore how the employment trend will weaken after any sudden slowdown in new order inflows as companies seek to adjust operating capacity down in line with weakened demand.

While employment continued to grow in October, the rise was the smallest seen since the labour market recovery began in March 2021, the rate of job creation having fallen sharply since the start of the year. 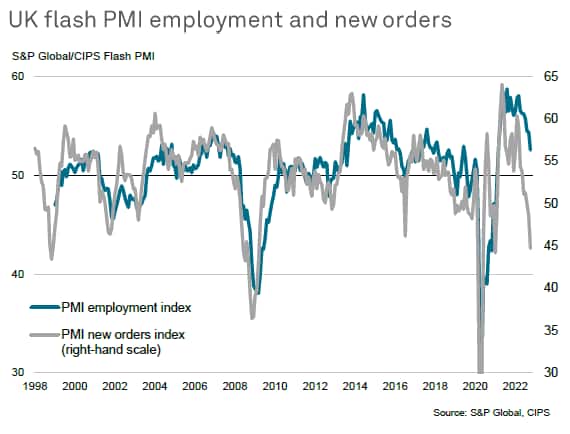 Manufacturing, which is seeing the sharper downturn in demand, is now already reporting net job losses, while service sector payroll gains have fallen to the lowest since March 2021. 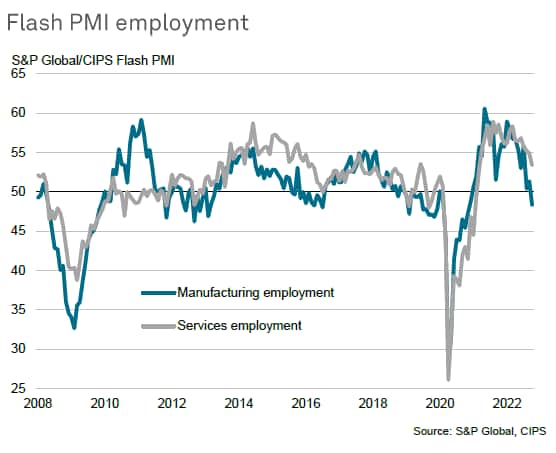 Average input costs paid by manufacturers and service providers meanwhile continued to rise at an elevated rate in October, albeit with the rate of increase slowing for a fifth month running to reach the lowest since September 2021. Average prices charged for goods and services likewise continued to rise steeply, though also saw the rate of increase wane, down to the lowest since August 2021. 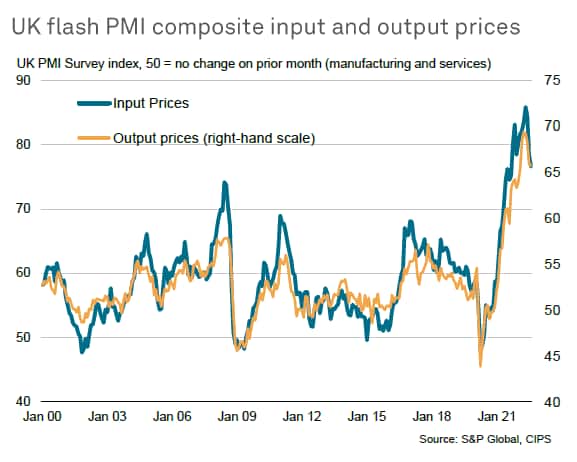 Despite easing, the rate of growth of firms' input costs remained higher than at any time in the quarter century survey history prior to the pandemic in October, pointing to sticky inflationary pressures. At its current level, the PMI's input cost index - which tends to lead consumer price inflation by 4-5 months, signals CPI inflation of just under 7%. 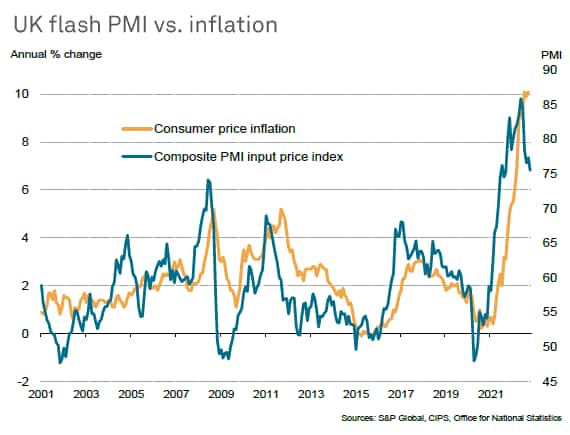 A key cause of stubborn price pressures in October was the weakened exchange rate as well as upward pressure on energy costs emanating from the Russia-Ukraine war. More encouragingly, supply chain delays eased, albeit with existing pandemic-related shortages exacerbated in some cases by port congestion and labour market industrial action. Supplier delivery delays lengthened at a decreased rate overall, however, linked to falling demand for inputs amid disappointing sales and inventory reduction policies. 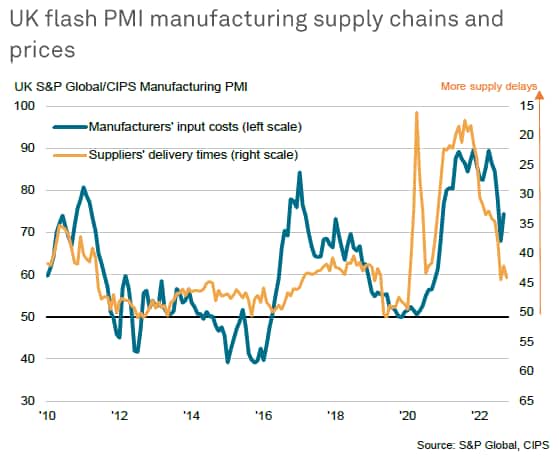 The resignation of Liz Truss as Prime Minister adds to the political instability and uncertainty facing the UK, which is always damaging to business. Whether the resignation eventually paves the way for greater stability in the months ahead remains to be seen, but any new government now faces increased challenges. Most notably, the worsened fiscal situation emanating from the increase in bond yields creates headwinds to the economic recovery and means fiscal policy could tighten just as the Bank of England appears intent on delivering further interest rate hikes in order to rein in inflation expectations. In short, the UK's outlook has darkened further and a recession seems inevitable, with risks tilting towards a deeper downturn given the recent events and October's Flask UK PMI data.