October's preliminary PMI numbers showed growth picking up in the US and UK and reviving in Japan and Australia thanks to stronger service sector expansions. The eurozone bucked this improving trend, however, as its service sector growth slowed, accompanying a broader manufacturing slowdown that is also evident in the US and UK. Importantly, the weakness of manufacturing is being driven by supply chain issues, which are pushing price higher, leading to unprecedented inflationary pressures.

The combination of strong services growth and rising price pressures will add to the case for policy tightening in the US and UK, but the outlook for growth is by no means certain.

Flash PMI surveys for October saw welcome returns to growth for the Japanese and Australian economies as the impact of the COVID-19 Delta wave faded, with falling case numbers also helping boost business activity growth in the US. UK growth also accelerated as the economy continued to open up, despite seeing rising virus case numbers, leaving the eurozone as the only major economy to suffer a weakening expansion during the month.

At 50.7, the au Jibun Bank composite flash PMI for Japan rose above the 50.0 no change level for the first time since April, with returns to growth seen in both manufacturing and service sectors. Companies commonly associated the recovery to a reduction in COVID-19 cases and looser pandemic restrictions. New case numbers have fallen from over 20,000 per day in August to the low-hundreds in recent days, according to Our World in Data.

Similarly, at 52.2, the equivalent index for Australia indicated a resumption of growth after three months of decline. While manufacturing output rose in Australia for a second successive month, it was the service sector which drove much of the turnaround in September, returning to growth after three months of activity being quashed by COIVID-19 restrictions which were subsequently eased in October.

Covid case numbers have meanwhile been trending lower in the United States since peaking amid the Delta wave spread in early September, which helped lift growth the fastest since July thanks to a surge in service sector activity. However, US manufacturers reported the weakest output growth since July of last year, with production inhibited first and foremost by supply delays and secondly by labour shortages. The US composite PMI nonetheless rose from 55.0 to 57.3.

A slowing of manufacturing growth was also evident in Europe. In the United Kingdom, an acceleration of service sector growth to the fastest for three months was in part countered by a near-stalling of factory output, which showed the smallest monthly gain since the lockdowns seen at the start of the year. The near evaporation of manufacturing growth nevertheless failed to halt the overall PMI rising sharply in the UK, from 54.9 to 56.8, running just shy of the equivalent US index thanks to the service sector gain.

In the eurozone, manufacturing growth held up more resiliently than in the UK, but still showed the weakest increase since the recovery from the early-2020 lockdown began in July 2020. However, unlike the US and UK, the eurozone saw weakening manufacturing growth being accompanied by a slowdown in the service sector, which posted the weakest increase in output since April. This twin-slowdown pulled the overall eurozone composite PMI down from 56.2 in September to a six-month low of 54.3 in October. 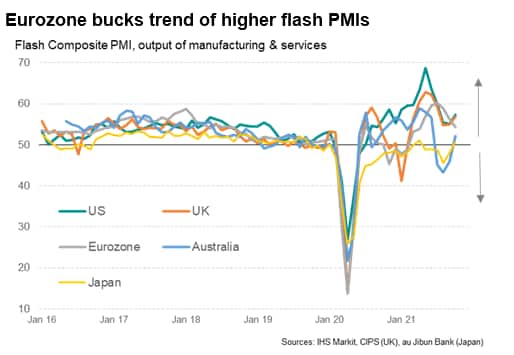 A key factor across the countries was a shortage of components and supply delays, which led to weaker manufacturing performance than would otherwise have been possible under current demand conditions. Note than, across the G4 economies as a whole, output growth has lagged growth of new orders continually over the past eight months, causing backlogs of uncompleted work to rise at an unparalleled rate over this period.

The disappointing news from October was that these shortages showed no signs of abating, and in fact appear to have worsened. On average, suppliers' delivery times lengthened across the four major developed economies in October to an extent not exceeded in over 20 years of data collection. A record lengthening of delivery times was seen in the US while the UK and Eurozone saw the second-greatest lengthenings on record, and Japan the third-greatest. 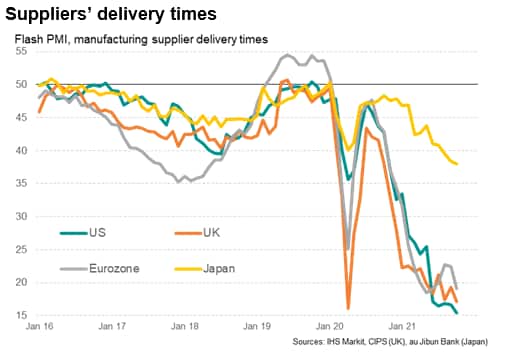 A further common thread in the October flash surveys was the feeding through of supply shortages to higher prices again. In the US and UK, labour shortages were also seen to have been driving up staff costs and wages.

Average input costs consequently rose at record rates in the US, UK, Eurozone and Australia, with input costs in Japan rising at a pace not seen since 2008. Faster rates of increase were registered for both manufacturing and service sector costs across the major economies.

Prices charged also rose at accelerated rates as these higher cost burdens were passed down to customers, with rates of inflation reaching new survey highs in the US, Eurozone and UK and rising to the highest since 2018 in Japan. 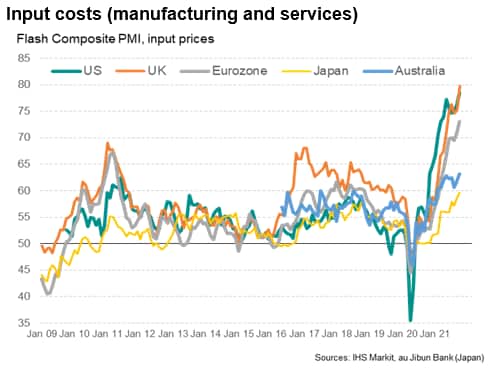 Despite the return to growth seen in Japan, the weakening of the eurozone expansion offset some of the service-sector led improvement in the US and UK to lift overall "G4 economies" growth only modestly higher in October. However, although well down on the recent peaks seen in the second and third quarters, the overall rate of expansion is well above the pre-pandemic average (the G4 composite PMI at 55.2 in October compares with a pre-pandemic average of 52.8), pointing to above trend economic growth at the start of the fourth quarter. 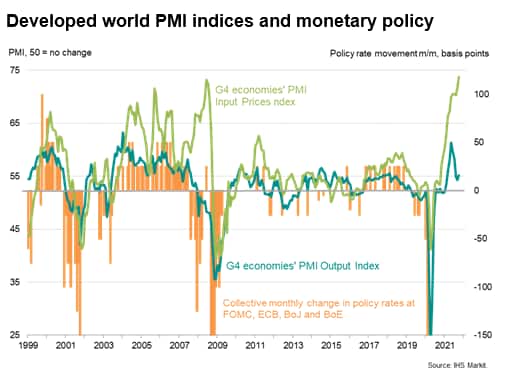 Upcoming PMI data should prove crucial in paving a clearer path for policy.

Encouragingly, in the first instance, November's manufacturing PMIs for Asia should help to understand whether supply from Asia is starting to improve after production was badly hit by the Delta wave. September already saw some signs of output improving in the Asia-Pacific region, which should translate into some easing of global supplier delivery times, albeit with a lag and dependent on logistics capacity - notably shipping - being accessible. See " Global manufacturing subdued by supply constraints, but pressures from Delta wave show signs of easing", 1st October 2021.

However, the future path of consumer spending and service sector growth also remains highly uncertain, especially as some of the current growth reflects some ongoing 'rebound' from earlier lockdowns. Service sector activity numbers in coming months will therefore be important to watch to gauge the resilience of demand, especially in the face of any further COVID-19 waves.

With this above-trend growth accompanied by inflationary pressures hitting their highest on record, it is not surprising that central banks are moving closer to removing some of the pandemic-related emergency stimulus.