October flash PMIs signalled that APAC economies, including Australia and Japan, returned to a state of expansion. The easing of restrictions in Australia in particular had been the primary lever, supporting improvements in economic conditions. That said, the rise in demand and lingering supply-side pressures, including input shortages and labour constraints, continued to send prices soaring into the start of Q4. Here are three takeaways from the October flash Australia PMI*.

The latest IHS Markit Flash Australia Composite PMI® showed that private sector output returned to expansion in October with the PMI printing 52.2, up from September's final reading of 46.0. This was the first expansion since June 2021, prior to when the Australian economy was hard-hit by the latest COVID-19 Delta wave.
While manufacturing output growth improved to a four-month high, the service sector had notably been the one to move the needle in October, seeing business activity returning to growth from a three-month period of contraction. Survey respondents widely reported the easing of COVID-19 mobility restrictions provided a boost for demand and output while business confidence also returned a level above the survey average. 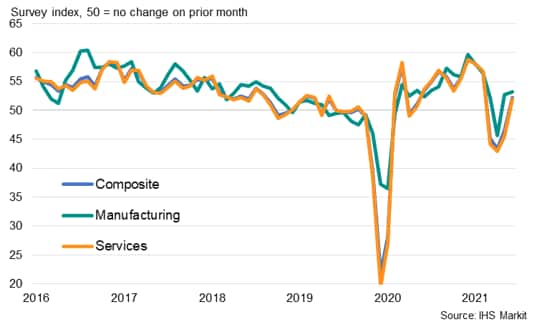 As a testament to the strength of the recovery in October, the backlogs of work index - a key indicator of capacity utilisation - also rose above the 50.0 no-change mark for the first time in four months across both services and composite gauges. The spill over of demand towards an increase in work outstanding in October had seen firms simultaneously expanding their operating capacity. Workforce levels continued to increase across both manufacturing and service sectors, though at a slower rate compared to September. 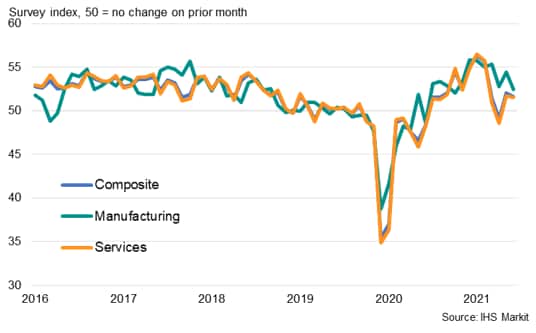 Where lower levels of employment were reported, panellists highlighted resignations underpinning the decline while others started to report facing shortages of staff amid the mandatory COVID-19 vaccination policy such as implemented in Western Australia. Difficulties in hiring were also widely noted across both the manufacturing and service sectors, highlighting the issue of labour shortages which indirectly contributed to higher costs for firms.

This also presents mixed signals for household consumption, which serves as a crucial growth driver, given the increased demand and relatively softer employment growth situation.

On prices, inflationary pressures continued to accelerate amid the growth in demand and with supply yet to catch up amid lingering COVID-19 disruptions.

Input price inflation notably accelerated to the fastest on record, supported by higher rates of price increases across both manufacturing and service sectors in October. Higher input costs were often associated with supply delays, as reflected in the continued lengthening of suppliers' delivery times in the manufacturing sector, which does not come as a surprise amid recent reports of supply issues across the globe. As such, firms were seeing both longer lead times and higher delivery costs which, alongside issues of input shortages and higher wages, offered no reprieve for the inflation situation in October. 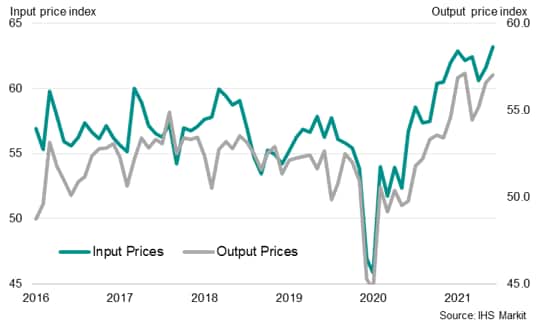 Concurrently, output price inflation picked up from September and printed the third-highest rate of inflation in the survey history. The wider expectation remains one of transitory inflation even as the June quarter saw inflation rising above the upper bank of the RBA's 2.0%-3.0% target in Australia. That said, the first Q4 indication of prices once again spiking warrants further scrutiny on where prices are headed for the Australia economy.