Detail sector PMI data compiled by S&P Global, derived from information provided by panels of over 30,000 companies in 45 countries, revealed a broadening of the global economic slowdown in April. With the exception of the downturn seen in early 2020 during the initial phase of the pandemic, April saw more sectors reporting falling output than at any time since 2012.

With the Ukraine war ongoing and mainland China locking down some of its major cities to fight the Omicron variant of COVID-19, supply chain disruptions have increased, damaging vast swathes of the global manufacturing economy, while price pressures have intensified, eroding spending power.

While growth outside of China has shown some encouraging resilience, losing only marginal momentum in April on average, this can be linked to resurgent spending on consumer services amid to loosened COVID-19 restrictions. However, demand for consumer goods has almost stalled as household spending is diverted to services, suggesting there is a risk that the global economy is reliant on a potentially short-lived rebound in consumer service spending to support sustained growth in the coming months.

Prices are meanwhile rising for all goods and services, though of particular concern is a record rise in food prices amid falling food production, which is likely to add to the global cost of living crisis. 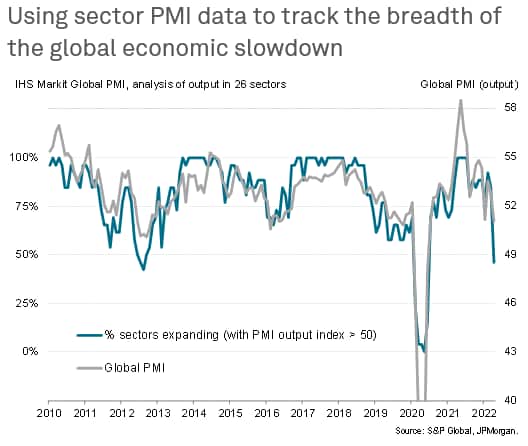 April saw the weakest pace of global economic growth since the initial pandemic lockdowns in early 2020, according to the JPMorgan Global Manufacturing Purchasing Managers' Index™ (PMI™). The PMI, compiled by S&P Global, fell from 52.7 in March to 51.0 in April, signalling only a modest expansion of output.

In contrast, consumer goods manufacturers felt the pinch, as household spending was diverted to services, reporting only a modest expansion and the weakest performance since June 2020. New orders placed for consumer goods likewise came close to stalling, with companies often also reporting that higher prices were deterring customers. 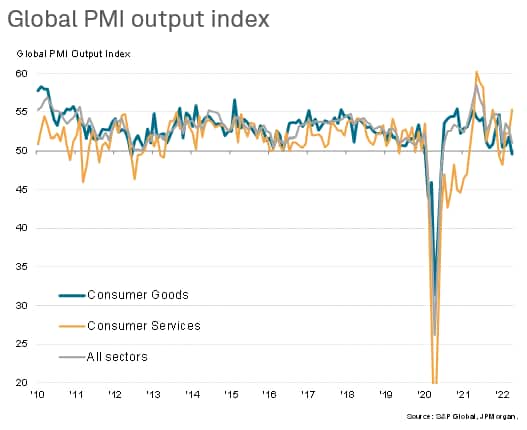 Downturn spreads to 14 sectors from just four in March

Looking into the PMI data at a more detailed sector level, some 14 of the 26 sectors covered by the PMIs reported falling output in April, up sharply from just four in March. The steepest declines were seen in basic material manufacturing sectors, including sustained downturns in mining & metals and basic materials resources, as well as renewed downturns for construction materials and industrial goods, often linked to deteriorating supply chains. 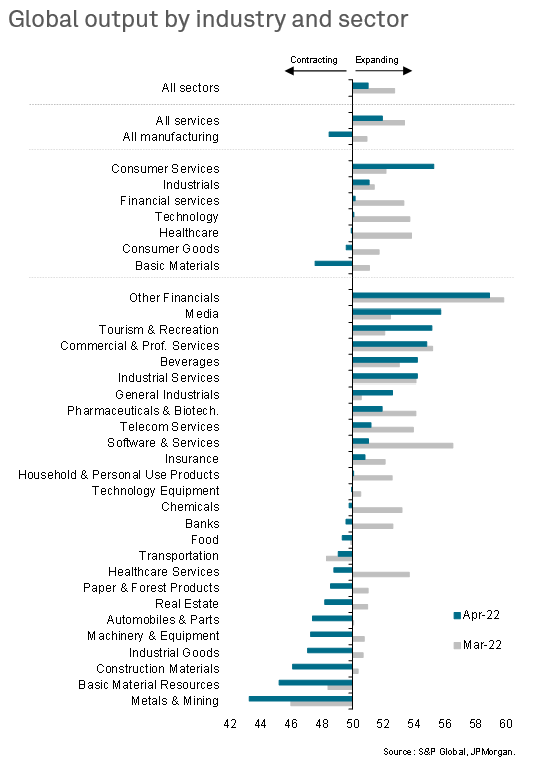 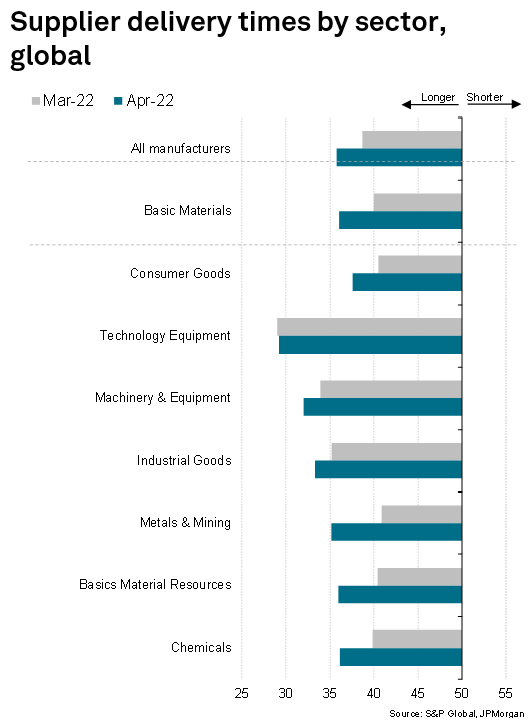 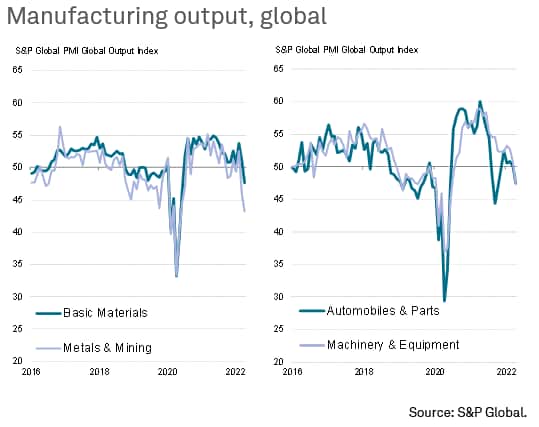 The service sector slowdown was led by the first drop in global real estate activity since May 2020, though banking services, transportation and healthcare services all also declined.

Growth rates varied markedly among the 12 sectors reporting output growth in April, ranging from sustained near-record growth in 'other financials' and reviving expansions for media and tourism & recreation, to near-stalled output of household products. 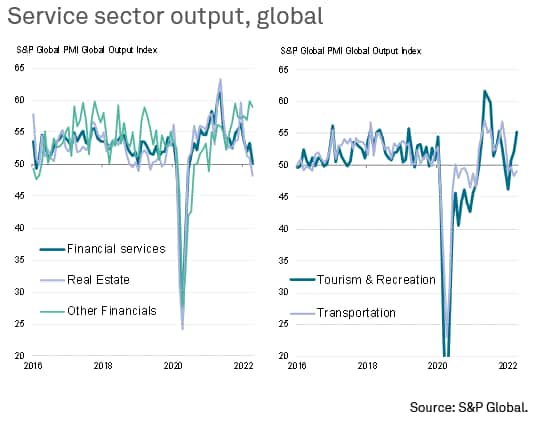 Record price rises seen in half of all sectors

Selling prices meanwhile rose in all 26 sectors during April, with rates of inflation accelerating in all but six. Around half of all sectors reported unprecedented rates of increase. In the service sector, these included transportation, commercial & professional services, industrial services, insurance, real estate, 'other' financials, media and tourism & recreation. In manufacturing, new record selling price increases were reported for autos & parts, general industrials and food & drink. 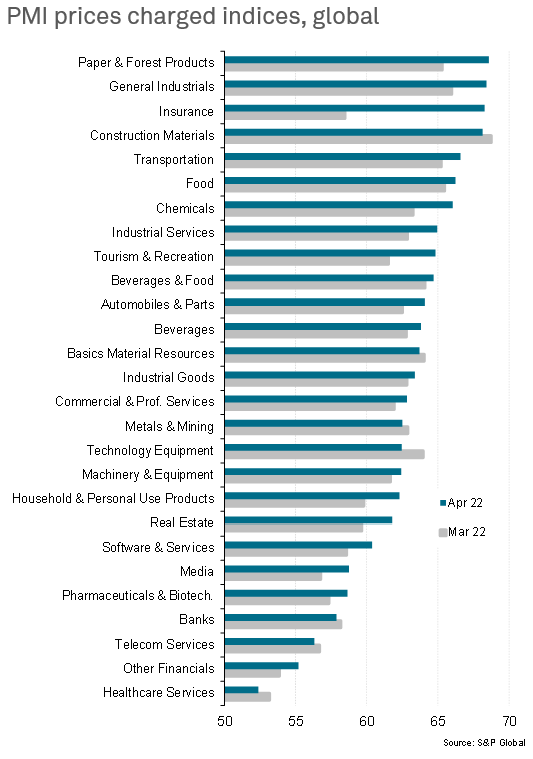 The record rise in food prices is a particular concern, especially given that that the sector has also reported falling output continually now for three months, with the worsening trend linked to the Ukraine war. The growing scarcity of food and associated price rises, combined with persistent elevated energy prices, threatens to exacerbate the global cost of living crisis, tending to hit the poorest the hardest. 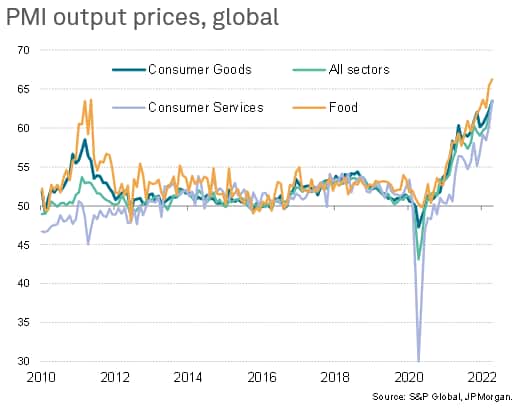 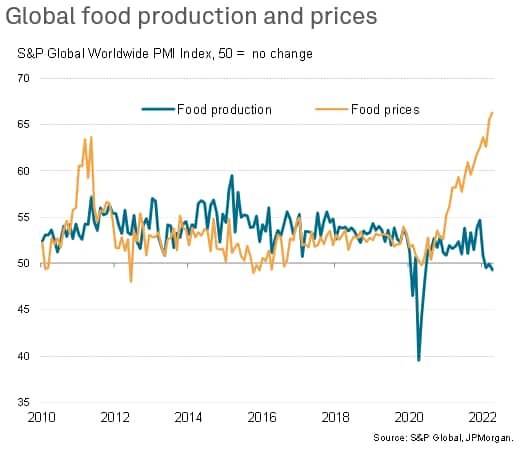 The broadening economic malaise is being triggered by the lockdowns in China and Ukraine war, both of which are exacerbating existing pandemic-related supply chain disruptions and price rises. Whether more sectors fall into decline depends on how long these two headwinds persist for, but is also a function of how well spending on consumer services can be sustained amid the intensifying cost of living crisis and growing concerns about the economic outlook.