Global price pressures intensified in April, according to the latest PMI data compiled for JPMorgan by S&P Global. The PMI survey data, based on panels of over 30,000 companies in 45 countries, showed near-record upward pressure on firms' costs amid supply chain disruptions and energy price hikes resulting from the Ukraine war and China's lockdowns. However, at the same time, global economic growth has slowed amid a marked weakening of demand growth, presenting some downside risks to raw material price inflation in coming months but also underscoring the risks to economic growth from tighter monetary policy.

April's PMI surveys saw new records set for selling price inflation in the US, eurozone, UK and Brazil. A near-record rate was reported in Japan and the strongest rise since 2013 seen in India. China, in contrast, saw average prices lowered for the first time since May 2020, but this largely reflected subdued demand amid new lockdown measures. 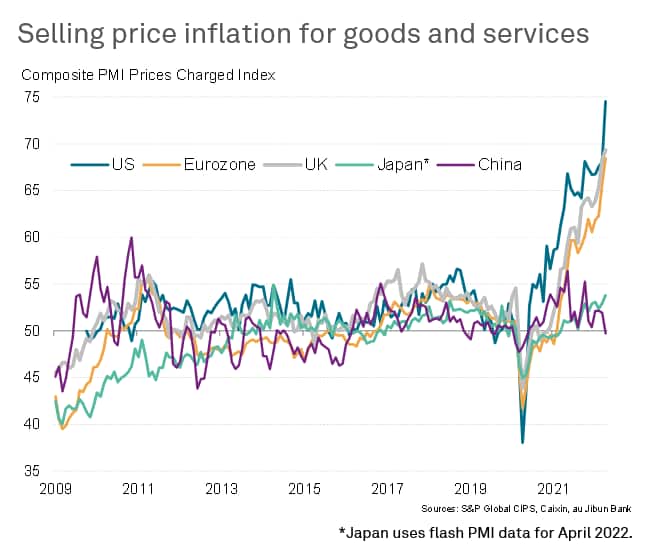 The global PMI's index of input costs, which has a longer time series history than the selling price index, also rose further in April. This gauge showed average input costs across manufacturing and services rising globally at a rate not witnessed since the commodity price shock of 2008, and a rate rarely exceeded since data were first available in 1998. 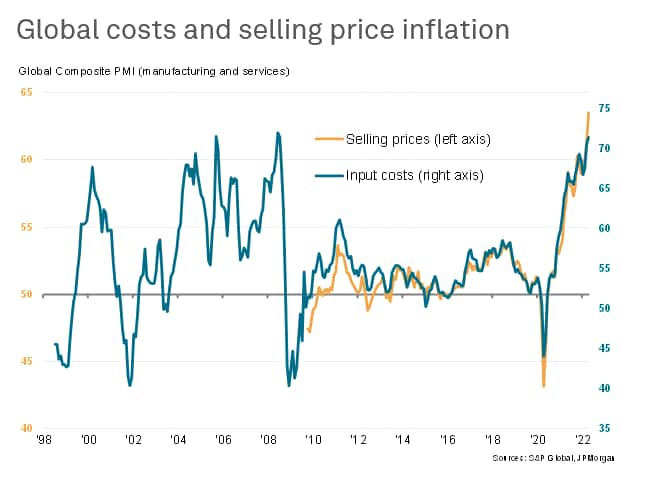 The clear implication of this further acceleration in growth of firms' costs in April is one of global consumer price inflation likely accelerating further in the coming months.

Of particular note was the extent to which service sector price inflation, which has generally lagged that of goods during the pandemic, has now almost matched that of goods. This in part reflects the recent surge in demand for services as economies around the world loosen COVID-19 restrictions. 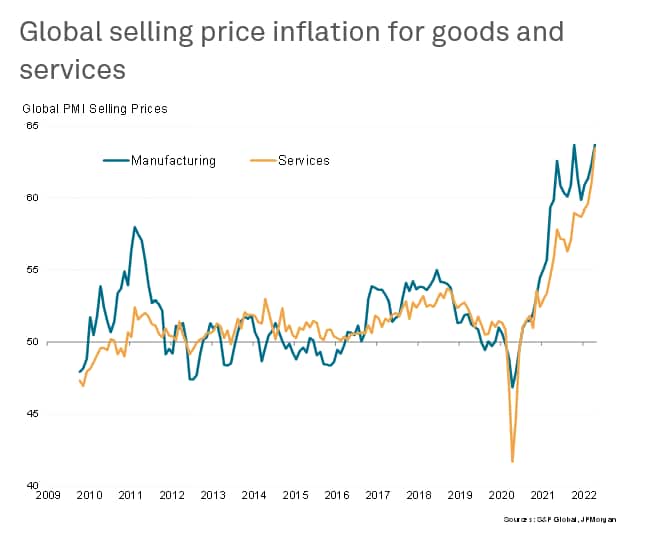 First, raw material prices continued to rise at an increased rate in April as pandemic supply disruptions were exacerbated by Russia's invasion of Ukraine and new lockdowns in China. The number of companies reporting higher raw material prices as a factor behind rising costs hit a new all-time high, running over three times the long run average.

Second, soaring energy prices due to the Ukraine war meant the number of firms reporting costs to have risen on the back of higher energy bills exceeded that seen even in 2008, running at an unprecedented level of over six times the long-run average.

Third, difficulties finding staff and rising costs associated with existing employees pushed wage pressures higher. Although down from recent highs, recent months have seen the strongest upward pressure on firms' costs from wages seen since these data were available in 2005. 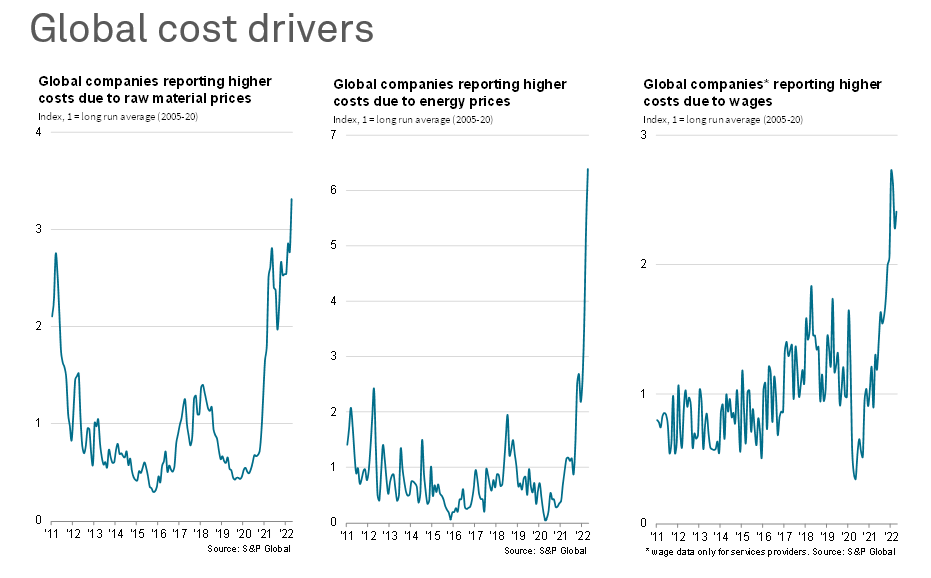 The extent to which prices have been driven up by supply chain delays and shortages is illustrated by the suppliers' delivery times index from the PMI. Globally, supplier lead times have lengthened to unprecedented degrees during the pandemic, with 2021 seeing new records being broken month after month in terms of supplier delays. While the opening months of 2022 saw some moderation in the number of reported delays, March and April have seen the supply situation worsen again, linked primarily to the disruptions caused by the Ukraine war and China's lockdowns. The latter is perhaps of the more notable concern for the near-term: China's PMI data have shown a more severe downturn in manufacturing output due to the recent Omicron outbreaks than seen in the initial COVID-19 shutdowns.

The supply crisis therefore continues to act as a major support to prices, especially for goods. Russian sanctions amid the Ukraine war meanwhile continue to act as a support to global energy prices.

However, while surging demand for goods helped drive prices higher early in the pandemic, this boost is now fading. Measured globally, new orders for manufactured goods barely rose in April, representing the weakest demand picture since the downturn of the second quarter of 2020. Even if China is excluded, demand growth has weakened on this measure markedly in recent months.

Thus, while the supply side is still driving prices higher, demand has faded to an unusual degree in this supply environment, suggesting goods prices could be prone to weakening in coming months.

While service sector demand and output has shown more resilience than manufacturing in recent months, even here the rate of expansion has slowed (even excluding China). 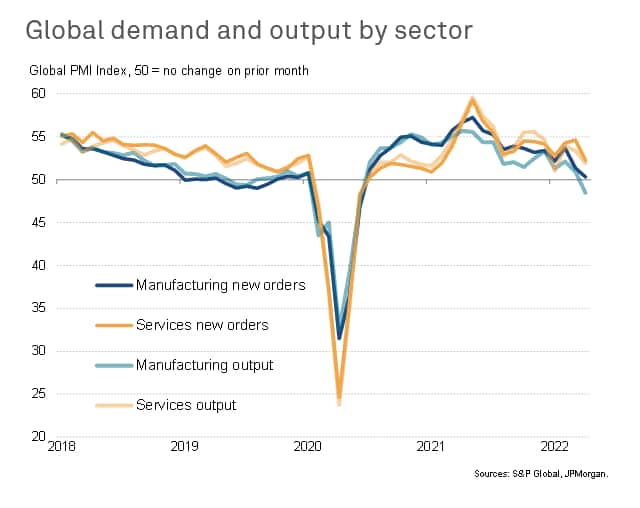 This stronger pace of service sector growth relative to manufacturing is being supported by pent up demand following the removal of pandemic restrictions, but by definition this demand rebound will moderate in coming months. The sustainability of this upturn - and hence service sector companies' pricing power - will therefore inevitably depend to a large extent on the degree to which consumer spending power is eroded by the rising cost of living - notable for essentials such as energy and food - as well as by the monetary policy response. Central banks are feeling the pressures to take more aggressive action to rein-in rising inflationary expectations via higher interest rates, which are designed to cool demand.

Central banks will be data dependent amid price and output divergences

However, the policy tightening process is by no means riskless or without cost. Looking at historical comparisons underscores the extent to which the renewed surge in price pressures in recent months at a time of slowing economic activity is unusual. The last time that a divergence on this scale was seen was just prior to the global financial crisis. It would clearly not take much to push the global PMI output index below the 50 mark from its current reading of 51.0, highlighting the rising recession risk associated with tighter monetary policy. Hence many policymakers are therefore stressing that rate hikes are data dependent, and in that respect the PMI numbers for the coming months are likely to provide critical inflation on the developing inflation, demand and supply trends. 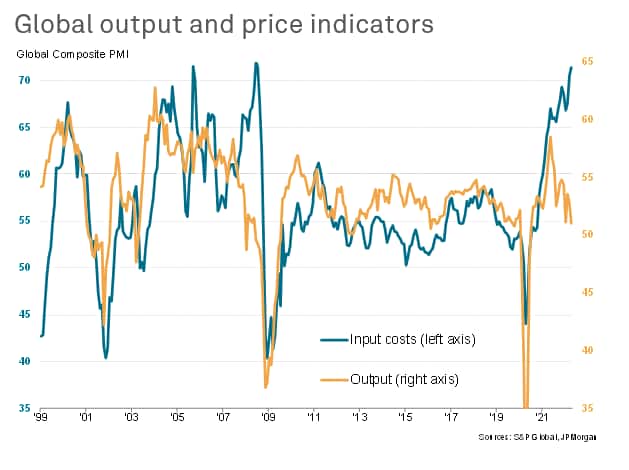