Growth in China's business activity gained further momentum at the end of the third quarter, according to the latest Caixin PMI data, led by faster manufacturing growth. Near-term indicators, such as new orders, backlogs of work and employment all showed accelerated improvements. However, longer-term prospects remained subdued, with concerns often relating to trade tensions. 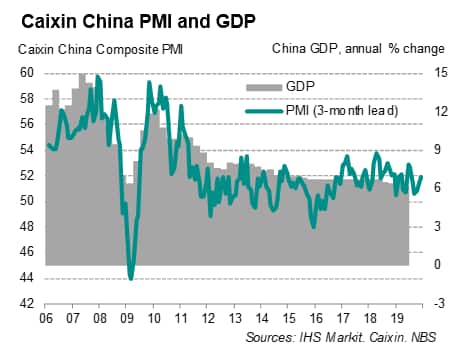 The Caixin China Composite PMI, compiled by IHS Markit, rose from 51.6 in August to 51.9 in September, signalling a modest improvement in the health of the economy. The latest reading was also the highest for five months. 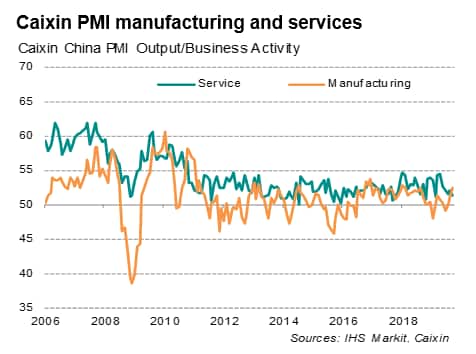 With backlogs of work now increasing at the joint-quickest rate since early-2011 during September, hinting at tighter operating capacity, companies stepped up their hiring. Job creation was not only reported for a second month in a row in September, but also ran at the fastest pace since the start of 2013. That said, overall employment growth was predominantly from the service sector, as factory job levels remained stagnant.

September saw the best improvement in manufacturing conditions since February 2018, driven by accelerated growth in both production and new orders. However, this improvement was uneven across the sector. Delving into the details of the survey revealed that, while sustained output growth was evident across the three firm sizes (small, medium and large), large Chinese manufacturers saw the fastest expansion in production, suggesting that current fiscal stimulus may have benefitted larger goods producers more than their small-to-medium-sized counterparts.

Business activity in the service sector meanwhile cooled in September, showing the smallest expansion for seven months. However, other survey indicators suggest an improvement in the situation could be around the corner. New business growth was the fastest since the start of 2018, which led to the first time in nine months that a rise in unfinished workloads was reported. Services job creation also accelerated to a rate not seen since January 2017.

Unfortunately, the improved readings on overall output and order books was not matched by a rise in optimism among Chinese firms. Business sentiment about output over the next 12 months, while positive, slipped to a three-month low, and remained well below the historical average. The chief concern highlighted by companies continued to be the impact of the US-China trade war. 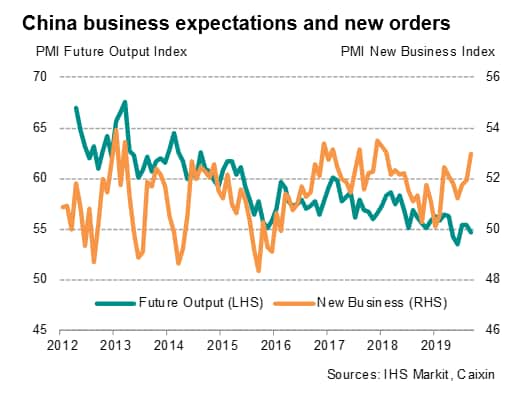