On 4 February 2022, Gazprom and China National Petroleum Corporation (CNPC) signed a new gas pipeline supply agreement for 10 Bcm/y when Russian President Putin visited Beijing to attend the opening ceremony of the Winter Olympics. This is the second pipeline import contract between Russia and China, with the first one being the 38 Bcm/y supply contract through the Power of Siberia-1 pipeline. This time, gas will be delivered via a new Far Eastern route sourcing from Sakhalin. This means that the gas source is physically separated from fields currently supplying Europe, the still-under-discussion Power of Siberia-2 pipeline project, and Power of Siberia 1. The deal will be settled in euros in an effort for both sides to diversify away from payments in US dollars. Other details, including the timing of first gas, ramp-up period, specific gas source, pricing structure, pipeline route, and entry point, have yet to be announced. 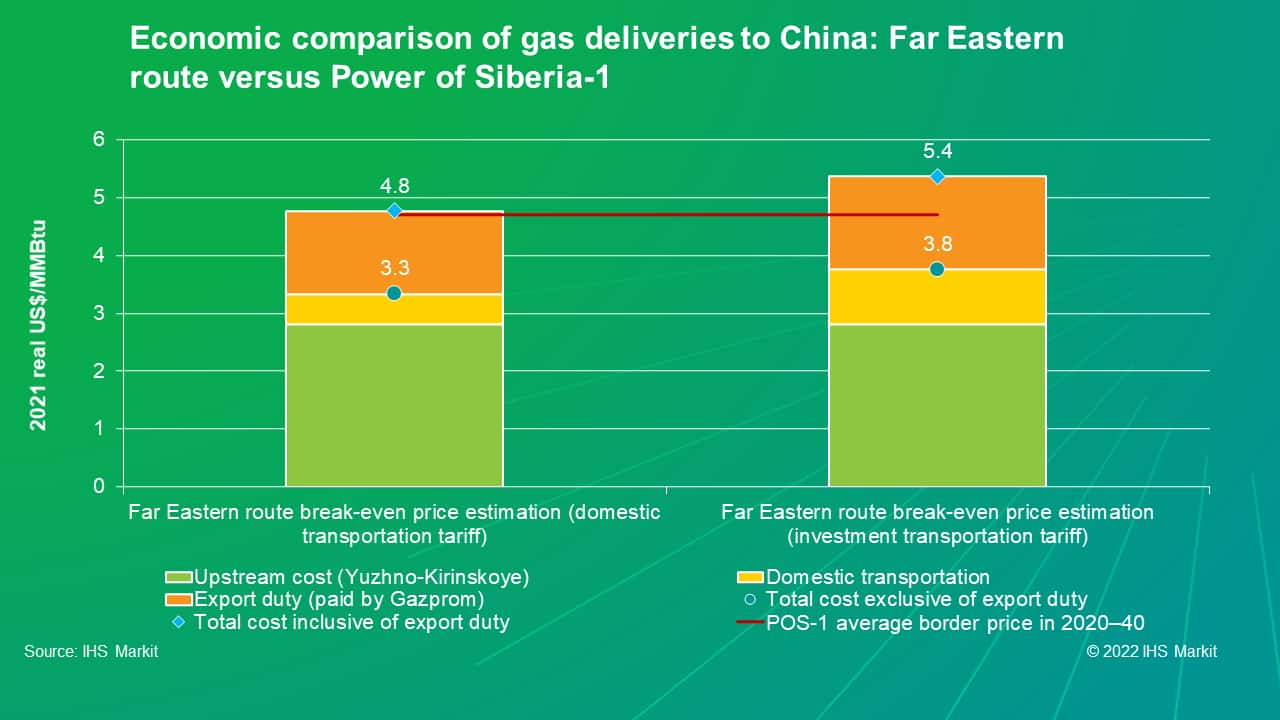 The Far Eastern route benefits from supply and pipeline availability and a cost advantage. The most likely source of supply is Gazprom's Sakhalin-3, particularly the offshore Yuzhno-Kirinskoye field which alone can achieve 21 Bcm/y of production capacity, and along with two other gas fields, can support 25 Bcm/y production plateau. In terms of pipeline requirements, the Sakhalin-Khabarovsk-Vladivostok pipeline can add compressors to support the new contracted volumes to bring gas to the entry point 100 km north of Vladivostok, but China will need to add about 800 km of new pipelines. Alternatively, a 580 km new connector pipeline between Khabarovsk and Blagoveshchensk can bring Far Eastern gas to the same entry point as Power of Siberia-1, then China only needs to add compressors to its existing pipelines instead of building new ones. The estimated break-even cost of the Far Eastern route at the Chinese border should be in the range of $3.3-3.8/MMBtu, counting upstream and transportation costs exclusive of export duty and $4.8-5.3/MMBtu inclusive of export duty. This break-even cost should be low enough for the project to be profitable if contracted pricing arrangements are similar to those for Power of Siberia-1.

The new deal represents a significant gas supply increase for China in general and CNPC in particular. Although recent Chinese policies indicate that natural gas will play a supporting, not main, role in achieving China's carbon emissions ambitions, incremental gas demand in absolute terms will still be material to displace coal use. In addition, following the recent spot LNG price volatility, there has been a dash back to long-term contracts, LNG import contracts in 2021 and a pipeline import contract now. The Far Eastern gas supply is unlikely to create new Chinese gas demand, because it will mostly target the same regional gas markets based on urbanization, economic growth, and affordability. If the new contract has a similar pricing structure and levels as the Power of Siberia-1 contract, this new supply will be competitive on a delivered basis against new LNG imports in China's northern and most central coastal provinces, squeezing Chinese demand for LNG imports. The magnitude of the impact will depend on the actual ramp-up schedule. Given the development time requirement, including the fact that the Yuzhno-Kirinskoye gas field is under US sanction, first gas may arrive around 2025 and full contracted volumes could be achieved within five years from the start of exports.

Learn more about the IHS Markit global gas coverage through the Global and Renewable Gases service.