To attract international investors to its petroleum sector, Sudan may need to improve its hydrocarbon legal and fiscal framework, which dates back to the late 1990s. Various elements are likely to require clarification, such as the award procedure and "how" royalty is applied to the exploration and production sharing agreements (EPSAs) from 2012. Moreover, after the past years' frequent institutional changes—the country is in a period of political transition following the April 2019 Sudanese revolution—the government needs to better define what the institutions overseeing the oil and gas sector are.

Constitutional Changes
Sudan is transitioning away from the autocratic presidency of President Omar al-Bashir and plans to hold general elections in late 2022 and draft a constitution. The Constitutional Charter for the Transitional Period of 2019 (Aug. 2019) stated that the transition period would last for 39 months. However, in late 2020, the transition period was extended to 2023. The Sovereignty Council, now composed of 14 members, including civilian and military representatives, is the collective head of state. The Transitional Cabinet plays the role of government, in which the Minister of Energy and Oil oversees petroleum affairs.

Why Improving the Petroleum Framework?
In addition to dealing with the political transition, if Sudan's petroleum sector wants to attract foreign IOCs and NOCs, it may want to consider updating its petroleum framework, which is based on the Petroleum Wealth Act of 1998 (1988 PWA). The petroleum industry in the country has had some recent setbacks, including that there have been no licenses awarded for various years, its production is in decline (56,000 b/d in December 2020), and, with the cancellation of the PSA for Block 6 with CNPC in December 2020, there is now absence of foreign companies operating hydrocarbon licenses. The difficult relationships of Sudan's previous regime with the international community (e.g., US sanctions against Sudan from 1997 to 2020) and an unclear petroleum framework were evident over the previous two decades when most of the foreign companies working in Sudan (until 2011, including South Sudan) were Asian NOCs interested more in accessing oil reserves than in executing petroleum investments based on profitability. 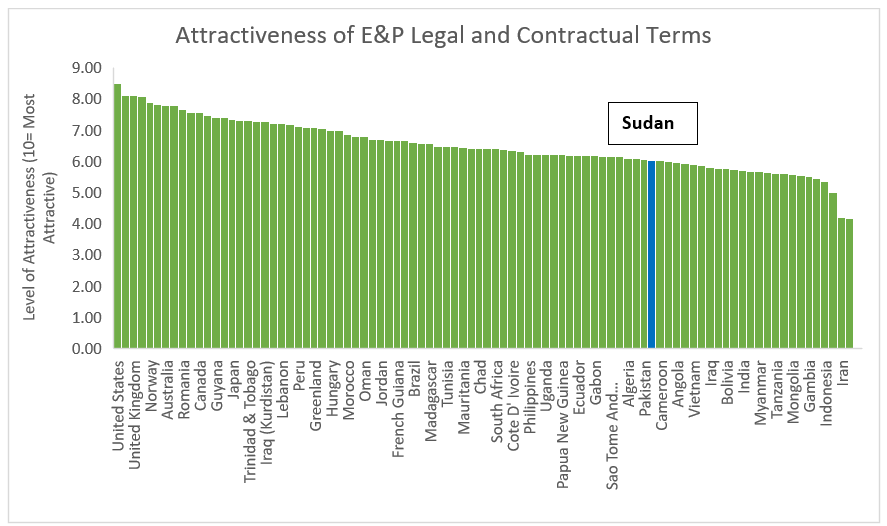 The process for awarding petroleum licenses is highly discretionary as there are no stated parameters for basing the selection on. Under the 1998 PWA, the awards of petroleum rights are made by the minister overseeing petroleum affairs considering the policies laid down by the Petroleum Affairs Council and adherence to the procedures of the Oil Exploration and Production Authority. However, there are no other provisions relating to the procedures. The 1998 PWA stipulates that awards are made to applicants meeting certain general criteria (technical ability and sufficient experience, financial ability to execute the contractual obligation, and abidance by Sudan's petroleum general policies), but no other details are provided. Concerning direct negotiations with a company—in 2020 Sudan offered 17 blocks on direct negotiation—the problem is less pronounced as there is a direct relationship between prospective contractors and Sudan's authorities. Instead, concerning a licensing round—Sudan over the past three years has repeatedly affirmed that it wants to hold a licensing round, though not providing any planned dates—there is an immediate issue of transparency and fairness for prospective contractors.

Governmental institutions' frequent reshuffles create interface issues for contractors. A case in point is the vicissitudes of the environmental authorities, which must approve an environmental impact assessment before greenlighting petroleum operations. Just by focusing on the last three years, in September 2018 Sudan abolished the Ministry of Environment, Natural Resources, and Physical Development, which was replaced by the National Council for the Environment (NCE). Between September 2018 and April 2020, the NCE and the Higher Council for Environment and Natural Resources (HCENR), the latter was previously the technical arm of the ministry, inherited the ministry's role. Finally, in April 2020, the Transitional Supreme Council (amending the Environment Protection Act of 2001) established a new HCENR, in which the NCE was merged.

Conclusion
Because of the political transition, the modification of Sudan's petroleum framework may take longer, but, as the petroleum sector has been a key source of revenue for Sudan, if the country wants to attract foreign upstream investors soon, it might want to start improving some weak areas of its petroleum framework.

This report was produced via analysis from the Petroleum Economics and Policy Solutions (PEPS) team. For more E&P Terms and Above-Ground risk insight and analysis, visit ihsmarkit.com/PEPS