How far is China’s offshore wind from reaching grid parity?

For China's offshore wind projects, failing to connect to the grid by 31 December 2021 means losing the entitlement to the national renewable subsidies. Without subsidy, the project tariff revenue from 2022 onward will benchmark the prevailing coal-fired power tariff only, equivalent to being cut by half from the feed-in tariff level of 850 yuan per MWh by 2021. IHS Markit expects close to 9 GW of offshore wind projects under construction are unlikely to commission timely. Offshore wind project developers will face a more than 10% cut on projects' internal rate of return (IRR) upon the national renewable subsidies cancellation. This was further complicated by the ambitious capacity build-out targets indicated by each coastal province's 14th FYP as well as state-owned power generation companies' climate commitment timelines.

Following the expected learning rate trajectory, the IHS Markit base case scenario suggested a 3.2% year-over-year reduction in the offshore LCOE from 2020 to 2030. This means the offshore wind LCOE will only catch up with coal-fired power toward 2030, allowing it to reach grid parity in 2028.

A combination of the right measures will bring the nationwide grid parity timeline forward. Designating offshore resources development with a scale at a minimum of 1 GW will potentially save 8% in capex, equivalent to 29 yuan per MWh in terms of LCOE. Splitting interconnection works, such as power substations and transmission, from offshore wind project developer's scope can take away as much as 56 yuan per MWh. In this case, such interconnection works is assumed to be handled by grid operators, following the common practice in other variable renewable projects. Combined with the investment reduction from gigawatt-level development and interconnection works, the 1% cheaper loan interest rate will contribute 35 yuan per MWh to the LCOE reduction. We consider the aforementioned measures, as defined in the aggressive scenario, will save as much as 120 yuan per MWh together in project LCOE, bringing national grid parity timeline forward to as early as 2024. 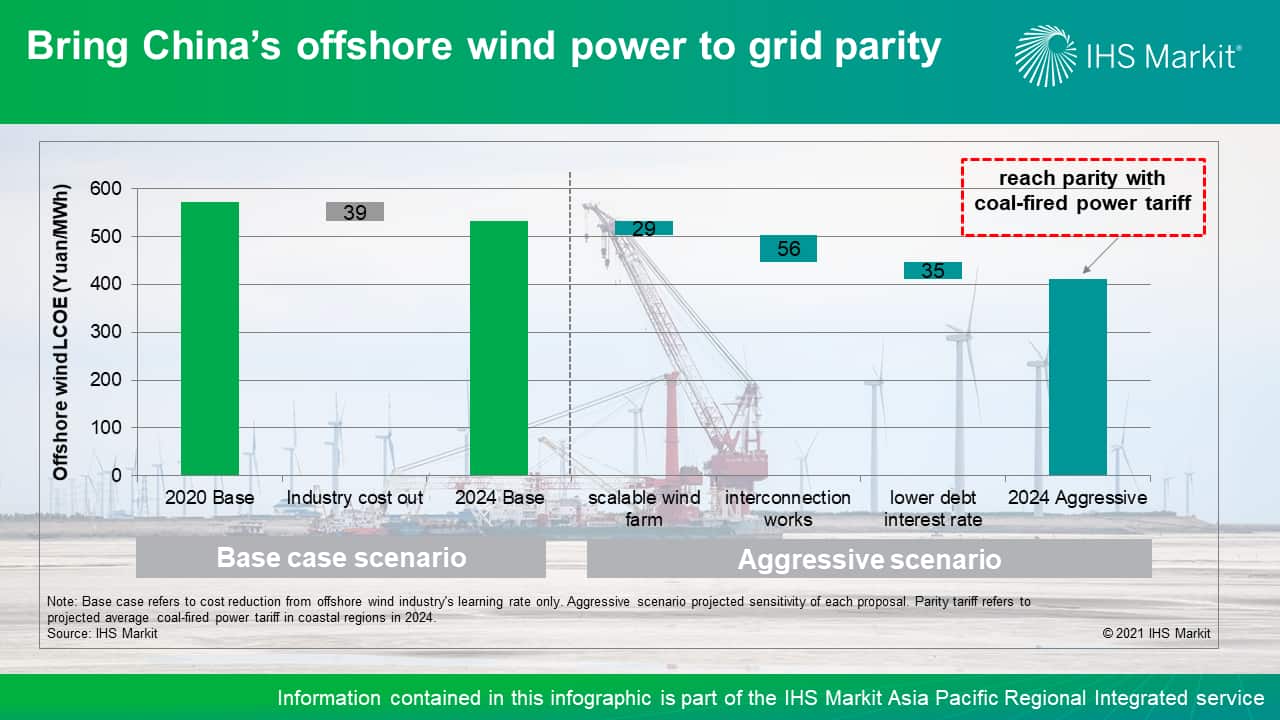 In the aggressive scenario, Jiangsu has the potential to reach grid parity in 2023 as the pioneer, while Guangdong will not lag behind thanks to the stimulus of provincial capex subsidies. Provincial level capex subsidies alone in Guangdong will not be able to close its gap toward parity with coal. However, the aggressive scenario implies that the journey can be shortened by five years for both provinces.