Central bank meetings will dominate headlines this week with the Reserve Bank of Australia (RBA), European Central Bank (ECB) and the Bank of Canada (BoC) all set to assemble. S&P Global services and construction PMIs will meanwhile add to last week's manufacturing PMIs which indicated a general slowdown and even contractions in activity. Elsewhere Q2 GDP updates for Japan, Eurozone and Canada will be eyed by markets while inflation figures for mainland China are also released.

Inflation data across the globe has confirmed worryingly persistent price pressures. Central banks have employed hawkish monetary policies amid efforts to cool growth and curb price rises, and this week sees the ECB, BoC and RBA likely to step hard on the brakes again. In all cases, rate hikes are on the table. Canada is dubbed to hold the strictest stance though it remains to be seen whether a 50-, 75- or 100-point hike is implemented. RBA is set to continue its 50 basis-points hike trend. However, it's likely that the ECB will garner the most market interest, with an unprecedented hike of 75 basis points now priced in. Q2 GDP updates for the Eurozone will also be released and add colour on economic performance.

The central bank meetings come in a week in which services PMIs are updated. After manufacturing PMIs showed a broad-based slowdown and easing price pressures, the focus will shift to the resilience of consumer spending on services amid the rising cost of living and high interest rates. The surveys will also provide an insight into the pass through of higher energy costs and wages to selling prices.

In Asia, a plethora of inflation data will be released, most notably for mainland China, Thailand and Taiwan. Mainland China's inflation rates are set to grow, but still remain weaker than those seen across the globe. Elsewhere, in Japan and Australia Q2 GDP growth rates will provide an indication into second quarter performance.

Finally, a relatively quiet week in terms of economic data for the US, whereas Canada sees a wealth of releases. Employment, inflation and GDP updates will be released for the latter, in addition to the central bank meeting.

Worldwide services PMIs are released in the coming week, coming on the heels of the manufacturing PMIs. The factory gauges were disappointing (see special report), with global output in decline amid the rising cost of living and an accelerating downturn in global trade flows. In fact, only India reported any material growth of goods exports in August, with Australia registering only a marginal decline and all other economies suffering falling exports. Perhaps most disconcerting was the extent of the decline in Taiwan, often seen as a bellwether of near-term global trade flows, where the decline was by far the steepest of all economies surveyed. 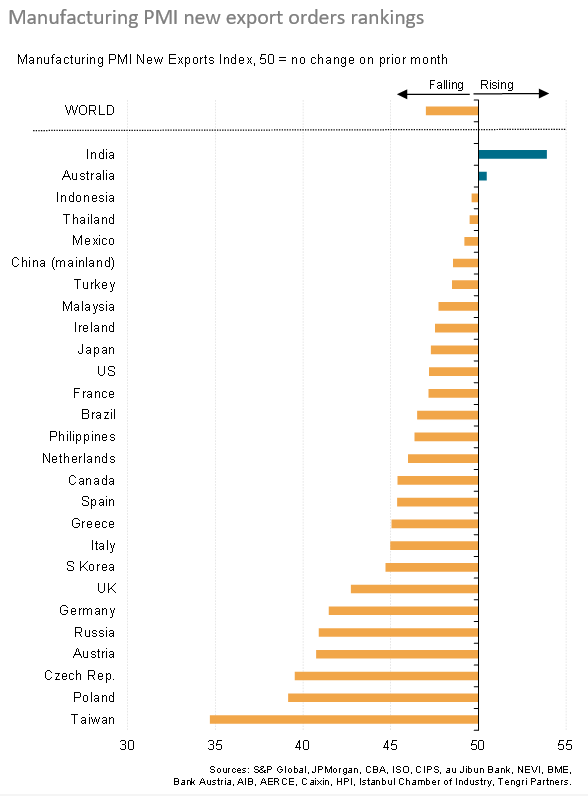 Following last week's manufacturing data - which revealed contractions in private sector activity across the UK, Eurozone, Japan, France, Germany and US - services PMI data will provide further insight into macroeconomic conditions. Flash data pointed to a general slowdown in activity, with some regions also registering outright declines. While the service PMIs will be watched with particular interest on Tuesday, also watch out for the construction and other detailed sector PMI releases mid-week.

This week sees a wealth of economic data and events for Canada with the BoC Interest Rate Decision arguably the most significant. A rate hike is certainly on the table, though it remains unclear on whether it'll be a 50-, 75- or even a 100-basis point hike after the previous meeting's 100bp shock. Q2 GDP updates will accompany the bank's decision.

Elsewhere balance of trade data for the US are forecasted to come in around the -$72.3bn mark (down from -$79.6bn). US mortgage application data will also be eyed by markets.

The ECB is set to unveil its latest interest rate decision on Thursday, and is sure to dominate headlines. After rising to a record 9.1% in August, CPI price pressures have showed no sings of easing. ECB officials warn a sacrifice is needed to tame surging inflation which will no doubt come in the form of another rate hike. A 75-basis point hike is now widely expected. The third Q2 eurozone GDP estimate will meanwhile reveal performance with annual growth forecast to moderate to 3.9%.

Price pressures in Australia have not displayed any sigh of relief with the latest CPI at 6.1%. Reserve Bank meeting minutes pointed to further steps taken to normalise monetary conditions. Three consecutive 50.0 basis point hikes suggest a fourth is highly likely.

Elsewhere in Asia, China inflation figures will be highly anticipated by markets and Japan will release Q2 GDP updates.