Flash PMIs last week provided a much-anticipated insight into the macroeconomic environment for the US, UK, Eurozone and Australia. The flash Japan PMI released this week completes the set while PMI data for mainland China - released at the end of the week - will be the first of September's final manufacturing survey releases. The US will once again be in the spotlight with GDP, consumer sentiment, durable goods orders, housing market and jobless claims data on the agenda. Sentiment data for Germany, France, South Korea, Italy and the Eurozone will also be eyed.

The latest flash PMIs revealed promising signs for the US, where the fall in output eased notably from August amid cooler price pressures, while in Australia output growth quickened. Conditions in Europe were more concerning, however, with the downturn deepening in both the Eurozone and the UK and price pressure showing greater persistence. Concerns over the availability and prices of energy have added to fears of energy rationing in Europe, with an emergency euro area energy meeting pencilled in for Friday, alongside unemployment and inflation releases.

In the UK, final Q2 GDP figures will be announced where sharp moderations in growth are expected by markets. Last week, the BoE hiked rates by another 50 bps, the UK government has since announced large stimulus packages to boost UK growth. Nevertheless, sterling and gilts have plunged, concerned about the effectiveness and cost of the government's new measures.

In the US, last week saw the FOMC hike by another 75 bp, pushing US interest rates at a 14-year high. This week, US durable goods orders will likely reveal a 1.1% contraction. Final Q2 GDP numbers are also due, with a 0.6% contraction forecast, which follows a 1.6% fall in Q1. The downward trend is expected continue with inflation near 40-year peaks. Sentiment and PCE price data on Friday will bring an end to this week's US data releases.

Flash PMI survey data showed a broad-based economic malaise across Europe and the US in September. Output trends worsened in the Eurozone and UK, suggesting both economies are in recession, with forward-looking indicators such as new orders and future expectations pointing to worsening trends in the fourth quarter. However, while the output gauges for US manufacturing and services also remained in contraction territory, rounding off one of the worst quarters snice the global financial crisis, the rate of contraction moderated.

This divergence between worsening output trends in Europe and signs of the downturn easing in the US can be at least in part traced to differences in inflationary pressures.

In particular, input cost inflation accelerated in the Eurozone and remained worryingly high in the UK, the latter notably seeing a sharp upward spike in manufacturing raw material prices. In contrast, input cost inflation in the US cooled sharply to a 20-month low. These cost differentials point to an easing in the impact of the recent cost of living crisis in the US while the situation seems to be worsening in Europe, where energy prices have soared far higher than in the US. Notably, the only sign of improved conditions in Europe was seen in France, where the government has taken the greatest action in softening the blow of soaring European energy costs on households. 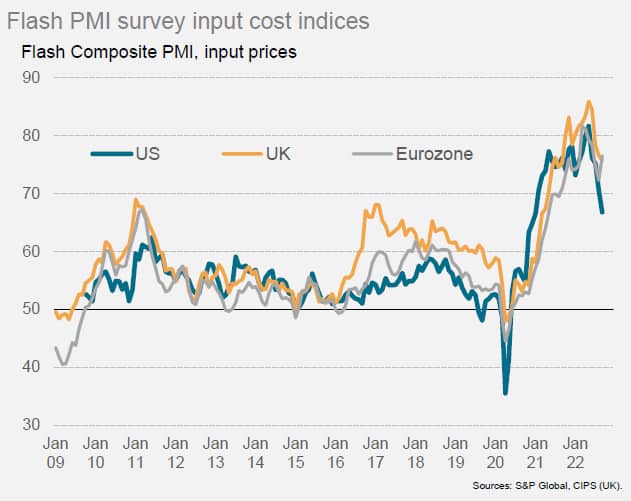 A number of releases for the US will add colour to last week's flash PMI releases. US durable goods orders will reveal the impact of high inflation on demand after flash PMIs revealed a struggling manufacturing sector, albeit with easing supply delays. The Chicago Fed activity index - out Monday - is also likely to indicate a subdued economic environment. The week ends with the University of Michigan consumer sentiment data where the recovery is expected to continue from June's recent low, preceded by Conference Board data on the Monday.

Elsewhere, policymakers in Canada will watch GDP readings for July with a particularly close eye. Final Q2 GDP figures for the US will likely confirm a mild decline.

The ongoing war in Ukraine and the profound impacts on European nations will likely have continued to weigh on sentiment. Data for Germany, France and Italy will be followed by markets to gauge an understanding in confidence.

Inflation figures will be widely anticipated, however, with attention very much focusing on the Eurozone. The intensification of the war and the direct and indirect impact on energy prices will likely push the latest inflation figure to 9.4% in the Eurozone (edging up from 9.1%).

With the pound coming under intense pressure, UK GDP could be another trigger for market selling if the data disappoint.

Thailand's central bank will convene where gradual rate hikes are expected. With inflation at a 14-year high a relatively hawkish stance is expected with markets expecting a 75 bp hike. Industrial production data for Thailand will also be released this week.

Elsewhere, S&P Global China manufacturing PMI will provide the first insight into manufacturing conditions on China's mainland. We forecast 3.3% YoY growth for 2022. China industrial profits data on Tuesday should give an indication on the sectors performance.