August flash PMIs will be in full focus this week and will offer updates on economic conditions at the crossroads of weakening global demand and intensifying inflation. US economy watchers will be kept especially busy with a string of economic data, including US July core PCE figures, the second Q2 GDP estimate, as well as the Fed's Jackson Hole symposium on 25-27 August where there will no doubt be a jam-packed agenda. Central bank watchers will also be eyeing the monetary policy meeting in South Korea, Indonesia and China. Finally, Q2 GDP updates will also be released for Mexico and Germany.

In Europe, growth has cooled according to the July PMIs, therefore August flash figures will be watched with particular interest to assess how regions have responded to difficult trading conditions. Inflation concerns, supply issues and macroeconomic uncertainty are expected to weigh on growth and, in some cases, lead to contractions in output. Meanwhile, Q2 GDP data for Germany is forecasted to slow to 1.4% (Q1: 3.6%) on the back of inflation hitting 7.5% last month. Concerns also come on the energy front, with threats to gas supply adding to consumer woes. Confidence data in the form of lfo business climate and Gfk consumer confidence figures are projected to reveal subdued sentiment.

Over in Asia, Japan and Australia, flash PMIs will be assessed intently. Last month's data pointed to stagnant business conditions in Japan while activity rose at the softest pace in six months in Australia. Elsewhere in the APAC region, China, Indonesia and South Korea will hold monetary policy meetings with only the latter expected to change rates. A 25-basis point rate hike is anticipated in South Korea.

Alert signals are on standby

Flash PMI figures - released at the start of the week - will shed some light on the ambiguity surrounding the current economic climate. In recent months, we have seen the market correct itself as the bounce back in demand post-COVID ebbs. However, intensifying inflationary pressures have aggravated the loss in appetite with the cost-of-living crisis threatening the health of the macroeconomy.

Additionally, global growth became sluggish, particularly in developed economies, with July data indicating the most severe contraction in total output since October 2012 (excluding those seen during the height of the pandemic of course). This is being reflected in sentiment figures with fears over a recession becoming more commonly cited by our panelists.

With data suggesting that the economy is cooling, it will come as no surprise to see further loss in activity in upcoming data. Attention should also be paid to PMI inflation data which will be an interesting watch amid moderating oil and gas prices. 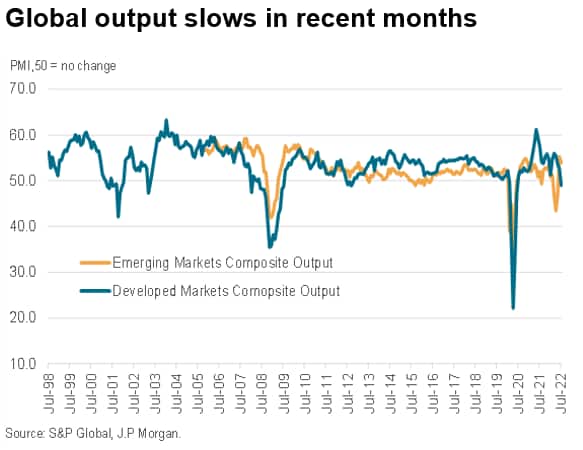 Three central bank meetings are set to take place in the APAC region over the next week. Despite slower economic growth across mainland China, the PBOC is expected to keep interest rates at 3.7%. Likewise, forecasters anticipate stability from the Bank of Indonesia, with the current bank rate likely to hold at 3.5%.

Meanwhile, in a bid to control inflation, the Bank of Korea has adopted a hawkish stance in its forward guidance. Monetary tightening is set to continue with the policymakers in South Korea expected to hike their rate by 25 basis points.

A plethora of US economic data will be released this week with one being the second Q2 GDP estimate (likely to remain unchanged from the initial -0.9% figure). The release of the Core PCE Price Index will provide further insight on the price front. Following a 4.8% index in July, inflationary pressures are expected to be high and remain a downside risk for future recession recovery.

US consumer sentiment, pending home sales and MBA mortgage applications will also be watched closely. The latter two will give key indications into the US housing market where there has been concern.

Germany Q2 GDP will be closely monitored for signs that building prices pressure in Q2 have dampened economic growth in Europe's largest economy. The war in Ukraine remains one of the largest threats as energy concerns loom. The release of Germany's Gfk Consumer Confidence Index will also be highly anticipated this week following July's record-low figure.

Sentiment data for several other of the key European economies are also set to be released this week which will give an insight into how households and businesses are feeling as recession fears grow.

Following recent interest rate hikes, business confidence across South Korea is expected to drop further from July's 21-month low. The outcome of the interest rate decision on Tuesday may lead to a further deterioration in overall sentiment in the coming months.

Meanwhile, Thailand balance of trade data will give a good indication in the health of the country's export environment.