The following is an extract from IHS Markit's latest Week Ahead Economic Preview. For the full report, please click on the 'Download Full Report' link. 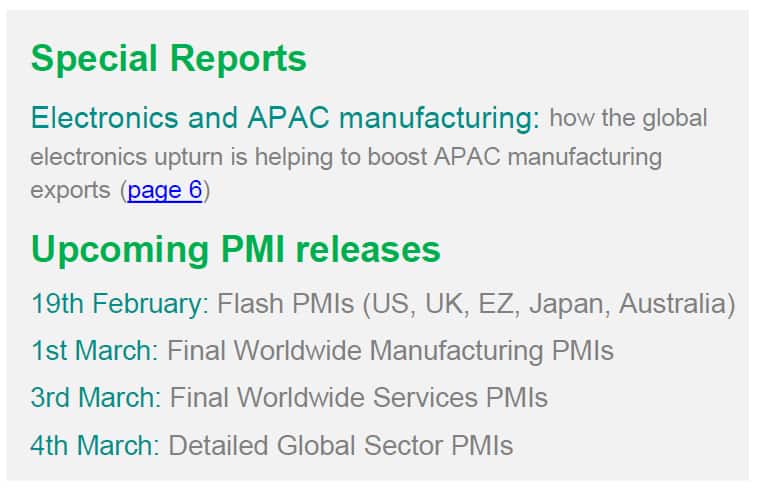 The week ahead is disrupted by the Chinese New Year and US Presidents' Day holidays, but nevertheless sees a busy diary of data releases to steer the markets.

The pick of our bunch is naturally Friday's release of the February manufacturing and services flash PMIs for the US, Eurozone, Japan, UK and Australia, though a number of countries also issue more backward-looking but important industrial production, trade and retail sales updates, alongside fourth quarter GDP estimates for Japan, the eurozone, the Netherlands and Thailand.

Meeting minutes from the FOMC, RBA and ECB will help assess monetary policy trends, while the central bank of Indonesia meets to set interest rates.

Flash US PMIs for February are accompanied by the Empire State and Philly Fed surveys plus jobless claims data, all of which will collectively provide a lens into economic growth trajectory midway through the first quarter. Retail sales and industrial production numbers are also issued for January. Recent US survey data have been strong, buoyed by vaccine roll out and fiscal stimulus, meaning the latest FOMC minutes will also be gleaned for any clues as to whether the Fed's accommodation could start to be reined in earlier than many have been thinking. Inflation is becoming more of a concern, especially after survey price indices hit decade-highs.

In Europe, GDP data are expected to confirm that the eurozone economy contracted in the fourth quarter, but it's the PMI data for February that will be more closely watched for news as to whether the downturn is intensifying in the first quarter. While the eurozone PMI slipped into a deeper decline in January, it was a slump in the UK surveys that was more alarming, as COVID-19 related lockdowns were exacerbated by Brexit.

Similarly, in Asia Pacific, the PMIs for Japan and Australia will be closely watched after January numbers showed the former struggling amid rising virus waves but the latter continuing to exhibit robust growth. Also watch out for GDP releases in Japan and Thailand, jobs and retail sales updates in Australia plus trade numbers for Japan, China, India and Indonesia.