Preliminary PMI survey data showed only a modest impact from the Ukraine war on current economic growth in the world's largest developed economies in March. Headwinds from the invasion, soaring energy costs, a broader rise in cost pressures and ongoing supply chain constraints were largely offset by a boost from the further reopening of economies from COVID-19 related containment measures.

However, business confidence for the year ahead slumped sharply lower, most notably in Europe, and a further intensification of price pressures and supply bottlenecks arising from the war looks set to worsen the global cost of living crisis.

The survey data therefore point to an increased risk of slower growth and higher inflation in the months ahead. However, much will depend on the extent to which the waning pandemic will continue to boost economic activity and offset the headwinds from rising geopolitical uncertainty and inflation. 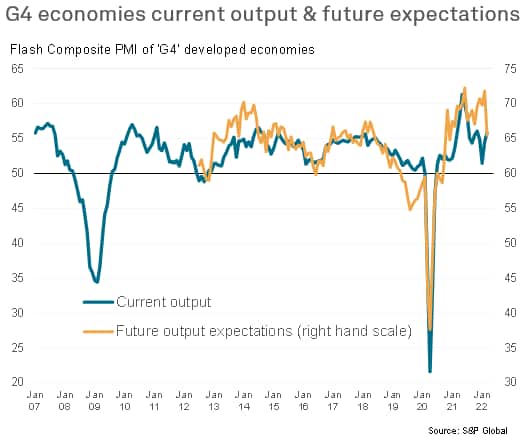 Business activity continued to grow strongly across the G4 developed economies of the US, eurozone, UK and Japan in March, with the preliminary 'flash' PMI survey's signalling the fastest rate of expansion since November of last year. 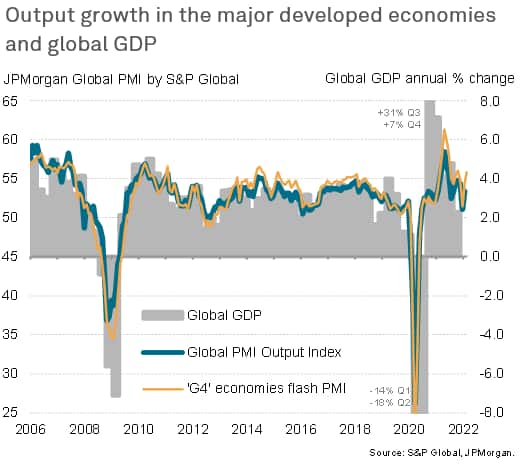 The upturn was led by the service sector, where activity growth accelerated for a second successive month from the near-stagnation caused by the Omicron wave in January. Service providers reported the strongest growth for four months as economies continued to open up from COVID-19 containment measures. Despite a tightening of lockdown measures in mainland China, virus containment restrictions worldwide in March were the lowest since the pandemic began in early-2020, providing a major boost to consumer-facing services and travel and hospitality in particular.

Manufacturing growth also accelerated, reaching the highest since last August, likewise buoyed by rebounding demand as well as some easing of supply chain constraints compared to those seen in the second half of last year. 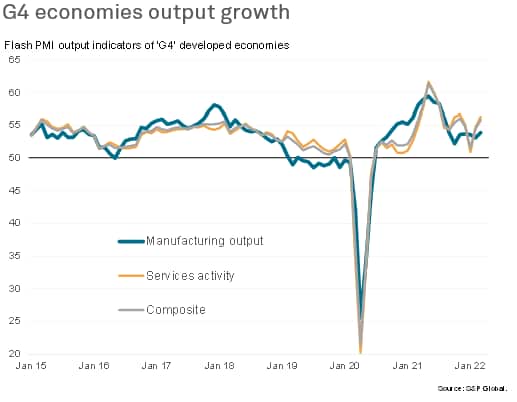 Only US sees stronger growth

The United Kingdom recorded the strongest growth of the four largest developed economies for the third month in a row in March. Despite seeing a slight moderation in the rate of expansion, UK output growth was among the strongest recorded in the history of the survey, reflecting a rebound in the service sector fueled by the near-complete removal of pandemic restrictions. However, a slowing in the rate of expansion was primarily linked to dampened demand arising from concerns over the Ukraine war and associated exacerbation of existing cost of living pressures.

Similarly, eurozone growth lost some momentum, first and foremost reflecting the impact of the war on confidence and prices, but also reflecting weakened manufacturing growth due to worsening supply chain bottlenecks due to disrupted supply out of Ukraine. 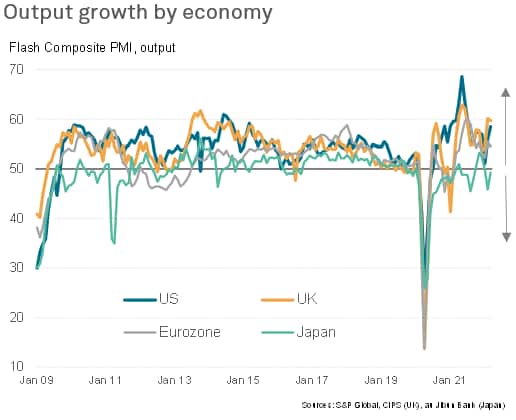 United States growth, in contrast, accelerated to an eight-month high in March, reviving further from the Omicron-induced slowdown seen at the turn of the year. Few survey respondents reported any immediate impact on output and demand from the Ukraine war, instead generally citing the opening up of the economy as having boosted growth of demand and output in both manufacturing and services. Like the UK and eurozone, US has seen covid restrictions relaxed to the lowest so far in the pandemic.

In Japan, output fell for a third month running as the country continued to battle against the new COVID-19 wave, though the rate of decline moderated to register only a marginal contraction thanks in part to virus-fighting measures not being raised further during the month.

While Russia's invasion of Ukraine had only a minor adverse impact on business output across the four largest developed economies in March, its impact was more evident on business confidence. Across the G4, business expectations of output in the coming 12 months slumped to the lowest since December 2020, sliding in all four economies but most notably in the eurozone. Future expectations hit 17-month lows in both the eurozone and UK, with 14- and five-month lows recorded in Japan and the US respectively. 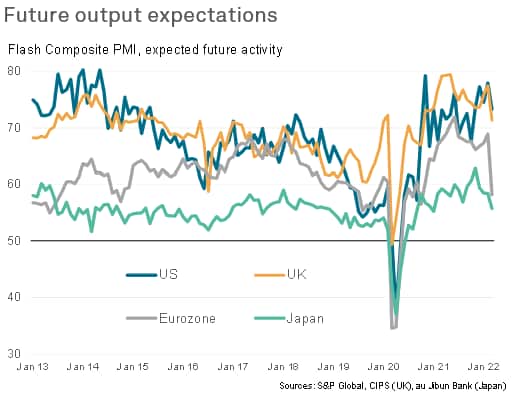 Anecdotal evidence from the surveys revealed that the invasion had exacerbated existing concerns over supply chains, prices and a potential slowing of economic growth as the pandemic rebound faded.

The surveys also revealed widespread reports of higher costs resulting from the war, notably for energy, which added to existing steep input costs pressures resulting from the pandemic. Across the G4, input costs rose at the steepest rate since comparable data were first available in 2009. Near-record highs for input costs were seen in the US, Japan and UK while a new 25-year high was seen in the eurozone. Importantly, while all four economies continued to see strong manufacturing costs pressures, new records were seen for service sector input cost inflation amid rising energy, transport and wage costs. 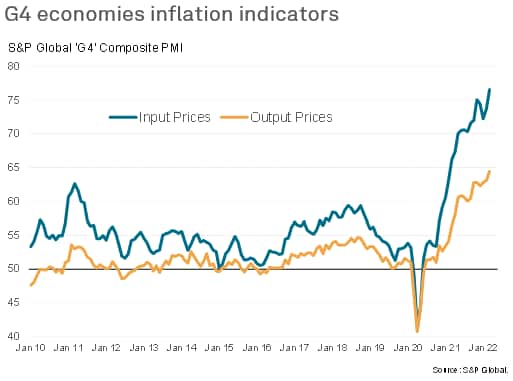 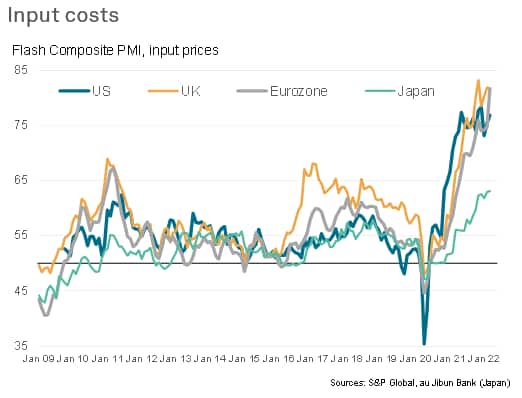 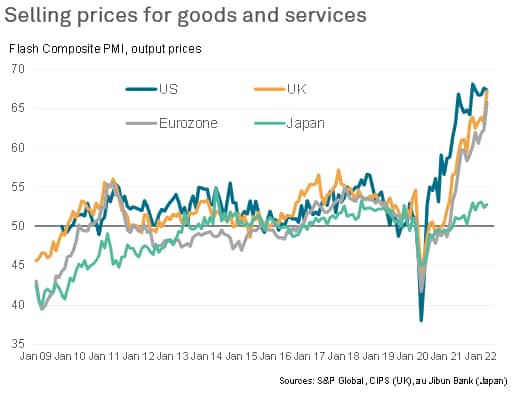 These higher costs fed through to raised selling prices, the rate of inflation of which also hit a new all-time high across the G4 economies on average. Selling price inflation rates hit new peaks in the UK and eurozone, with a near-record increase again seen in the US, though inflation remained more muted in Japan, mainly blamed on subdued demand.

A further ramification of the Ukraine war was a worsening of supply chain delays in the eurozone, which is closest to the conflict. Having shown signs of easing in recent months, eurozone suppliers' delivery times lengthened in March to the greatest extent since last November. Delivery delays also rose in Japan, linked in part to new lockdowns in China.

More encouragingly, delivery delays eased in the US and UK, to the lowest since January 2021 and October 2020 respectively, largely due to an easing of pandemic-related supply bottlenecks. However, in all cases supply chains lengthened to degrees that have not been seen prior to the pandemic outside of unusual events, and an overall increase in supply delays across the G4 on average hints at sustained elevated material price pressures in the coming months. 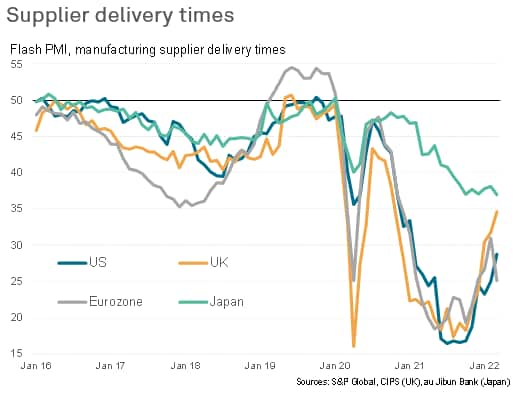 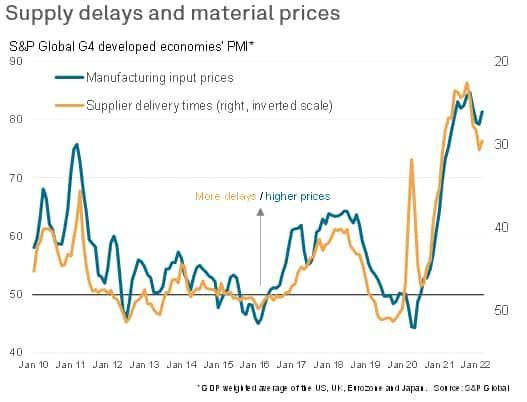 With the PMI data signalling stronger economic growth and rising inflationary pressures in March, at face value the surveys bolster the case for further monetary policy tightening, especially in the case of the US and UK. 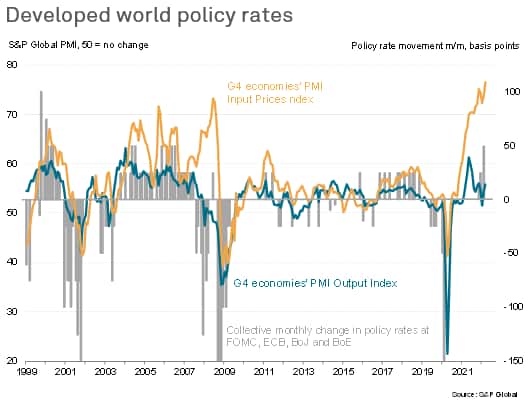 However, the big question for policymakers in the months ahead will be the extent to which the further reopening of economies and the fading of the pandemic provides a sufficient boost to offset the headwinds of the uncertainty and price hikes caused by the Ukraine war, as well as the existing cost of living crisis, the trend towards tighter monetary policy and reduced fiscal stimulus relative to the emergency pandemic measures. Given the slide in business sentiment captured by the surveys, the risks seem tilted towards slower economic growth but rising inflation in the months ahead. 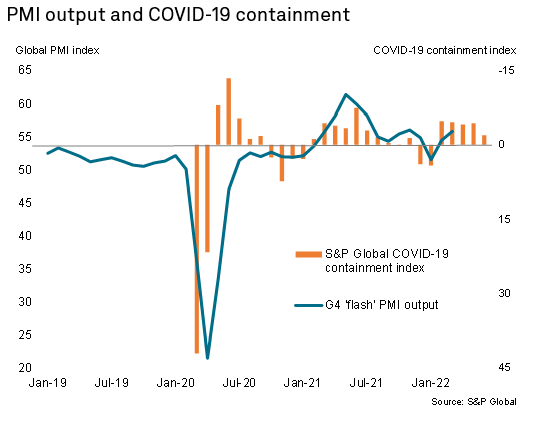