The headline IHS Markit/CIPS Composite PMI - a GDP-weighted average of the output indicators from the manufacturing, construction and services surveys - fell from 49.5 in October to 48.9 in November, its third-lowest since April 2009. Over the past six months, only July saw modest growth of business activity, representing the economy's worst patch in terms of deteriorating business activity since the global financial crisis ten years ago.

The average PMI reading for the fourth quarter so far is historically consistent with a 0.1% quarterly rate of decline in GDP, though our nowcast model incorporating a wider field of data suggest a flat picture. 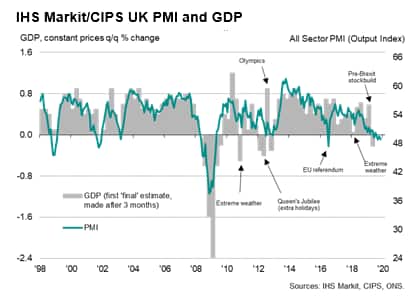 The steepest downturn continued to be reported in the construction sector, where output has now fallen for seven successive months (and in nine of the past ten months), continuing to decline at one of the steepest rates since 2009 despite the pace of contraction easing slightly in November.

November also saw manufacturing output fall for a sixth straight month, albeit with the rate of decline having eased in recent months from the steep downturn seen in the third quarter, which saw production deteriorate to the greatest extent for seven years.

A renewed fall in service sector output meanwhile rounded off a triple-whammy of declines, with only July 2016 and March of this year having seen steeper falls in output over the past seven years. Within services, only computing & IT and transport & communication saw higher activity levels. Consumer-facing service sectors reported the strongest downward trends. 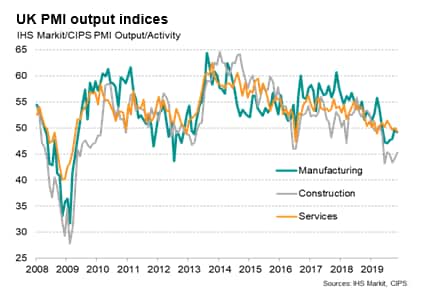 Analysis of the anecdotal evidence collected in the three PMI surveys underscored the extent to which business continued to cite Brexit uncertainty as a key factor dampening business activity and hurting demand. However, Brexit woes were exacerbated by further uncertainty ahead of the general election on 12th December. PMI surveys do not always fall in the month before a general election, sometimes even rising, but the current election appears to have dented demand. New orders in fact fell in November to the second-greatest extent since April 2009, deteriorating in all three sectors. Export orders fell particularly sharply, and especially from EU-based customers.

The steep loss of new orders meant order inflows deteriorated at a sharper rate than output across the three sectors, resulting in one of the quickest falls in backlogs of work recorded in recent years. Such a marked depletion of outstanding business points to the development of excess capacity, which was in turn linked to further job losses in November. 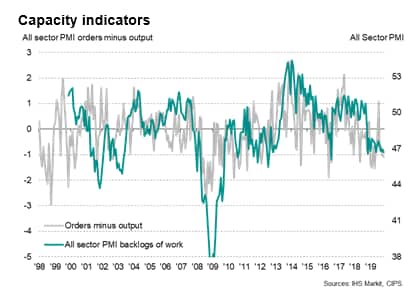 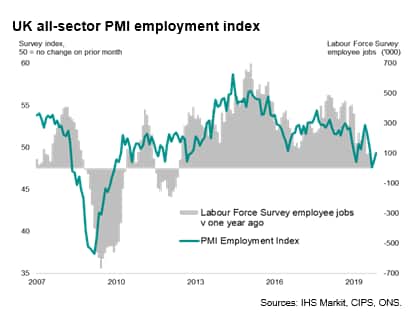 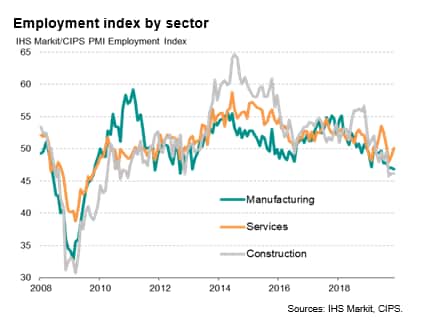 Across the three surveys, net job losses were recorded for a third successive month. Although the overall rate of payroll cuts eased, the fall in headcounts continued to paint one of the bleakest job market pictures seen over the past ten years.

Encouragingly, business optimism about growth in the year ahead improved in November. The lift in sentiment mainly reflected easing fears of an imminent no-deal Brexit, and hopes that greater clarity on Brexit will help revive demand to some extent. However, the overall degree of optimism remained historically subdued as companies continued to worry about the uncertainty caused by Brexit and the changing political environment, as well as wider geopolitical issues such as trade wars and slowing global economic growth. 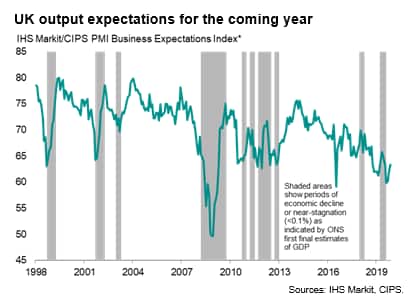 The PMI surveys have diverged from GDP in recent quarters, with the latter showing considerably greater volatility than the survey data. Much of this volatility in the GDP numbers appears to have resulted from Brexit-related factors, such as stock-building and car sector factory closures ( read more about this divergence with the survey data here).

Using an average of the GDP data to iron out some of this volatility, the official data and survey data show similar trends of growth slowing markedly so far this year. On average, GDP has now fallen by 0.1% in each of the latest six months for which data are available (to September).

The next PMI release of the flash manufacturing, services and composite PMI numbers for December is scheduled for 16th December.

With headline inflation in #Brazil retreating to a four-month low in October, and the #PMI Composite Output Price I… https://t.co/EYYqcz35XG