The underlying trend in the pace of UK economic growth likely slowed for a third successive month in August. Although some sectors such as consumer services have rebounded from a surge in COVID-19 case numbers, other parts of the economy are struggling amid weaker demand growth and shortages of inputs and workers.

UK economic growth slowed sharply in July despite the economy being further opened up from COVID-19 related restrictions. GDP rose just 0.1% on the prior month, according to the latest official data from the ONS.

Even in the best of times, caution should be used in extrapolating any signals from one month's data, and the volatility in economic activity caused by the pandemic means the recent data have been especially volatile. July's near stalling, for example, followed a 1.0% surge in GDP during June.

Some of this 'noise' can be removed by looking at the growth trend as indicated by the three-month-on-three month moving average growth rate, which fell to 3.6% in July, down from a recent peak of 4.8% in June. Importantly, IHS Markit/CIPS PMI data, available up to August, point to this trend growth rate weakening further mid-way through the third quarter. A weighted average of the PMI output index covering manufacturing, services and construction, fell for a third straight month in August, dropping to its lowest since February. 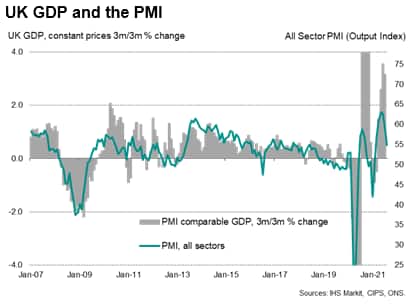 Like the GDP data, the PMI had shown consumer services struggling in particular amid rising virus infection numbers as the Delta wave spread across the country. Encouragingly, the PMI data for August indicated that growth in consumer-facing sectors revived strongly. However, growth deteriorated in other parts of the services economy in August, notably across the vast business and financial services sectors, suggesting that - measured overall - services acted as a bigger drag on the economy in August.

The PMI survey also showed manufacturing output and construction industry growth deteriorating further in August, linked in many cases to activity being constrained by supply shortages, exacerbating a broader labour shortage problem which appears to have increasingly hit more parts of the economy in recent months.

The latest recruitment industry survey, conducted by IHS Markit for REC and KPMG, showed staff availability to have deteriorated at a rate far exceeding anything seen in the survey's prior 23-year history in August, with salaries rising at a record pace as firms fought for workers via increased pay rates. 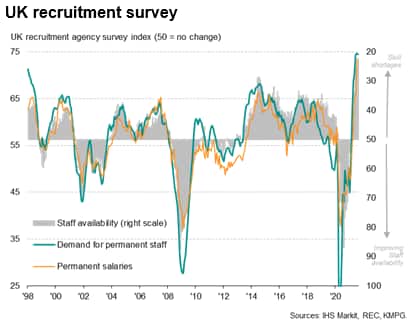 While the accelerating pay growth will fuel concerns among policymakers that inflation could rise further in coming months, an overriding concern is likely to be the potential further weakening of growth in the economy, as supply constraints limit expansion while demand growth cools from the post-lockdown rebound seen in the second quarter. With workers now also facing a 1.25% tax hike, many policymakers may wish to see more data before pushing for any withdrawal of monetary stimulus. 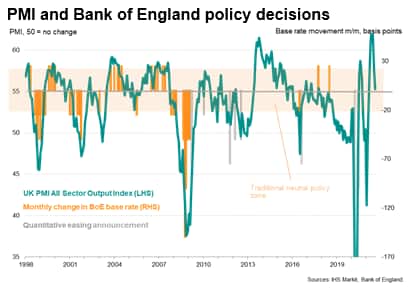