The UK PMI survey data signal a marked cooling in the pace of UK economic growth during April, caused by an abrupt slowing in demand for both goods and services.

Concerns over the worsening inflation outlook were meanwhile flamed by another near-record surge in firms' costs during April. Companies cited the increasing costs of raw materials as well as soaring energy prices and upward wage pressures.

Firms are taking a more cautious approach to hiring and spending as the outlook grows gloomier. While the start of the year saw businesses in high spirits amid the reopening of the economy, this ebullient mood is being eroded by concerns about the damaging effects of the ongoing pandemic, soaring inflation, the Russia-Ukraine war, and rising interest rates.

While the current pace of expansion remains relatively solid, the rising cost of living and drop in business confidence suggests that the slowdown in the economy has further to run. 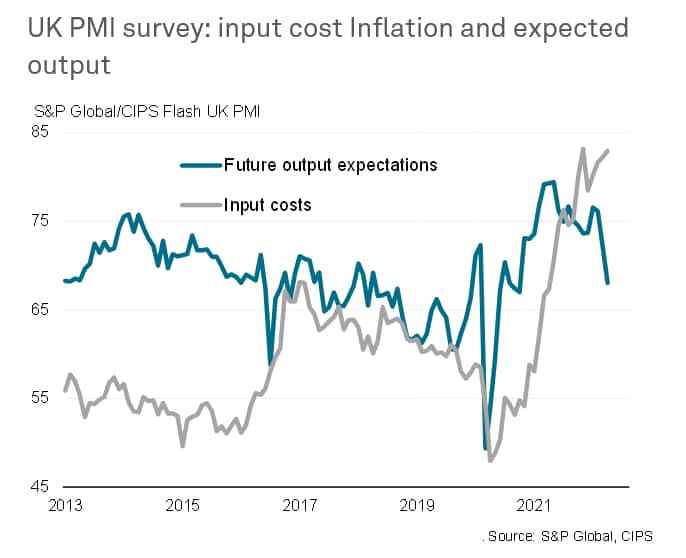 The S&P Global/CIPS composite PMI™ fell from 60.9 in March to 57.6 in April, according to the preliminary 'flash' reading. While still indicating a robust pace of economic expansion, broadly consistent with GDP growing at a quarterly rate of 0.7-8%, the latest reading signals a marked slowing in the pace of growth at the start of the second quarter. 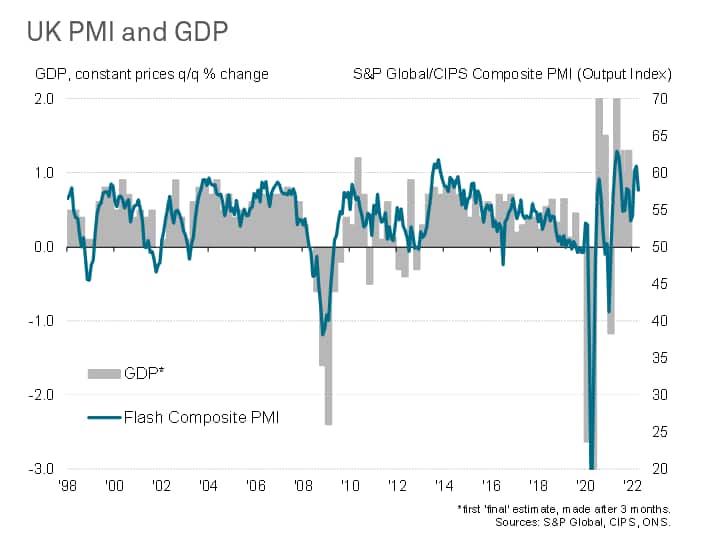 Although manufacturers reported a slight improvement in production growth, linked in part to some easing of supply chain delays, the service sector reported a substantial slowing in business activity. More worryingly, growth of demand deteriorated in both sectors as the boost from the reopening of the economy after COVID-19 related containment measures was replaced by mounting headwinds from various sources. 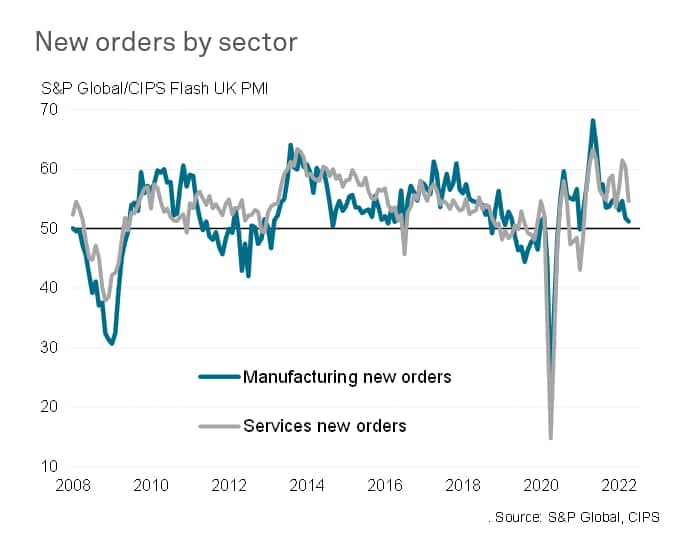 Service sector new business inflows grew at the slowest rate in 2022 to date, down sharply from the buoyant rates seen in February and March. In manufacturing, order book growth has steadily lost momentum in recent months, driven by an increasing loss of export sales, to result in the weakest rise in new orders since January 2021. April's drop in goods export orders was the largest since the global lockdowns in the early months of the pandemic.

Both manufacturers and service providers reported demand having been hit by high COVID-19 infection rates and spending power having been squeezed by higher prices, but Brexit was also commonly seen as having damaged export performance, and the Ukraine war - with accompanying Russian sanctions - was cited as an additional headwind. 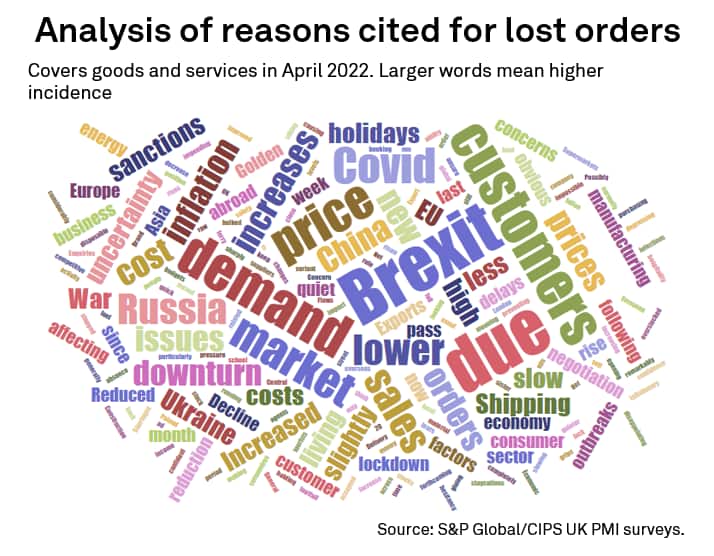 Concerns over the worsening inflation outlook were flamed by another leap in firms' costs during April. Average input costs across both manufacturing and services rose at a rate just shy of last November's record high, pointing to a further re-acceleration of inflationary pressures. Companies cited the increasing costs of raw materials as well as surging energy prices and upward wage pressures. 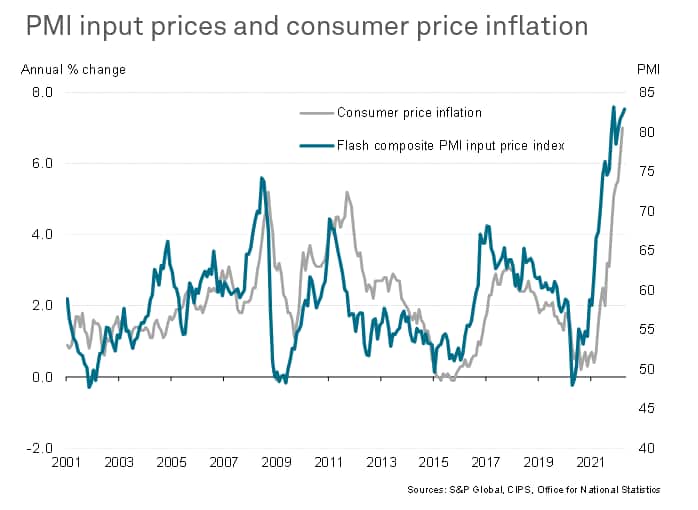 An especially steep acceleration of manufacturing selling prices was seen as firms passed higher costs on to customers, resulting in the highest rate of goods price inflation yet recorded by the UK PMI surveys. Service sector selling prices likewise remained elevated, though moderated slightly as some firms reported price resistance from customers. 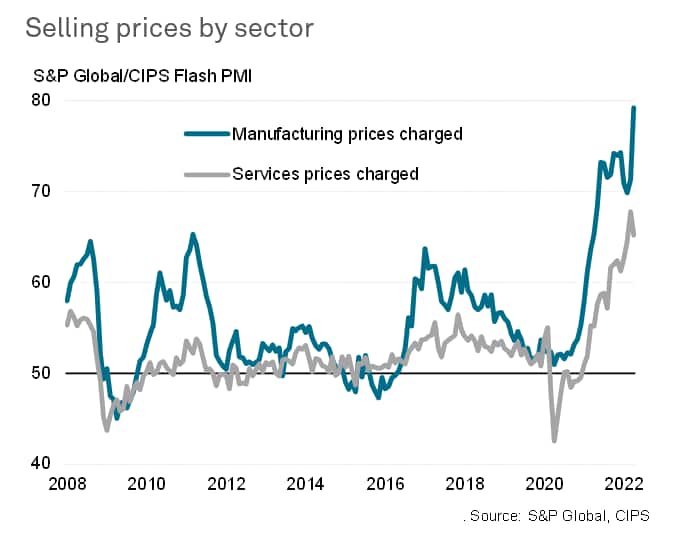 Having been hit hard in March, future output expectations were scaled back further in April, with prospects now running at their lowest since October 2020 on average. Concerns over the Russia-Ukraine war added to concerns over Brexit, supply chains, prices and economic growth. Expectations of output growth over the coming year fell sharply in both manufacturing and the service sector. 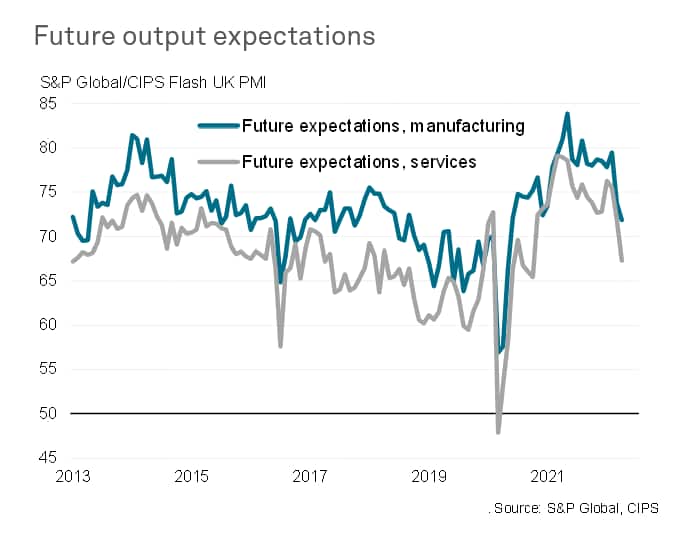