Preliminary PMI survey data showed economic growth slowing in the US and UK as strong pandemic rebounds showed signs of fading. In contrast, a reopening of economies in the eurozone and Japan helped drive improvements, helping to offset weakened manufacturing performances arising from fresh supply delays. Shortages of inputs were linked to the Ukraine war and lockdowns in mainland China.

A fall in backlogs of work in the UK meanwhile suggests the UK could underperform the US and eurozone in coming months as pent-up demand is depleted. However, in all four of the largest developed countries, future output expectations have slumped far lower than seen earlier in the year, attributable to increasing concerns about future economic growth amid the Ukraine war, policy tightening and the rising cost of living. The latter was underscored by the surveys signalling further steep inflationary pressures, with rates of inflation for goods at services once again at or near record highs across the developed world in April.

The flash PMI survey output indices, which track current business activity levels, showed growth slowing in the UK and US, caused primarily by weaker service sector expansions. This reflected some cooling of demand for services compared to very strong rates of expansion seen in February and March, when these economies reopened from Omicron-related containment measures. Both the UK and US saw the near complete removal of any virus-related restrictions on activity in February and March.

In contrast, the eurozone has seen COVID-19 containment measures relaxed later, and less aggressively than the US and UK. This has meant the boost to services such as travel, tourism and recreation has likewise occurred later in the eurozone, providing the main boost to eurozone economic growth in April at a time when these effects were fading in the US and UK.

In Japan, some easing of COVID-19 containment measures also helped lift the economy back into expansion territory, though with restrictions remaining tighter than in the US and Europe, the rate of expansion remained relatively subdued. 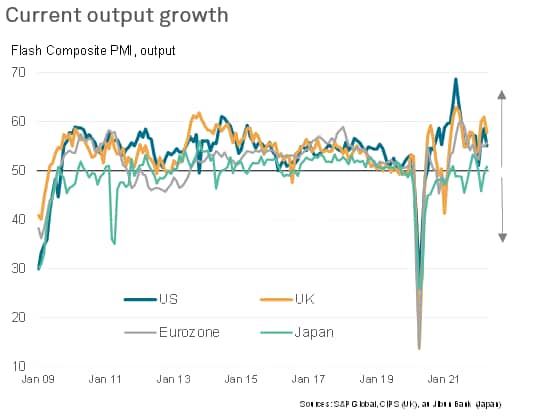 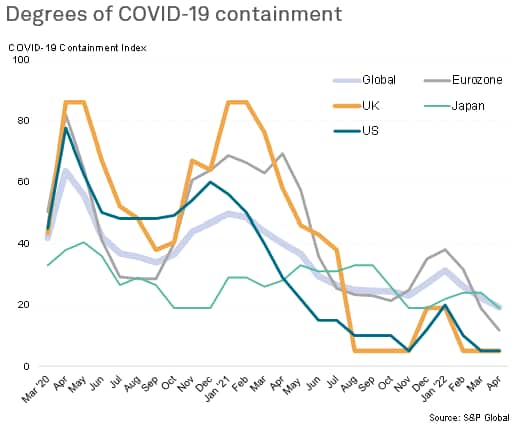 The survey data therefore suggest that the tailwind of looser health restrictions associated with the pandemic continues to drive the economic recovery in the world's major developed economies, albeit with these forces moderating in the US and UK.

Meanwhile, manufacturing in the US continued to benefit from pent-up demand from the pandemic and some moderation in the number of production constraints relative to the shortages seen last year, with a similar boost also recorded in the UK.

However, the eurozone saw manufacturing hit by worsening logistics issues as the proximity of the war in Ukraine disrupted supply lines. Most notable was an auto-sector-led drop in manufacturing output in Germany, which contributed to a near-stalling of factory output growth across the single currency area. Similarly, production in Japan continued to be restricted by supply shortages, emanating in part from new lockdowns in China. 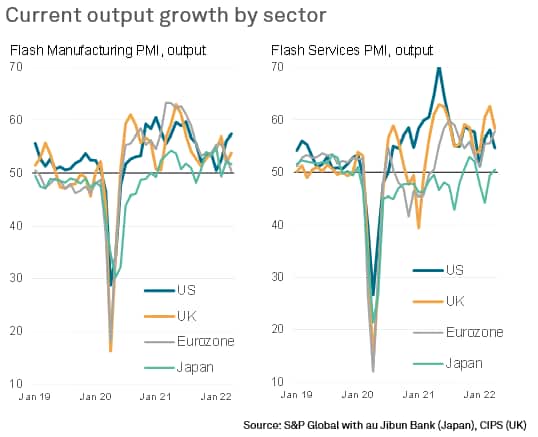 Backlogs of work hint at UK weakness ahead 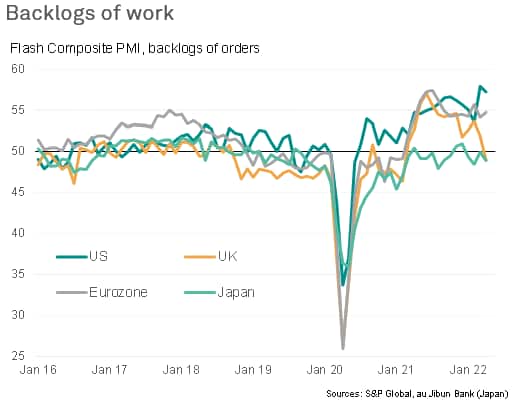 These indicators showed the US continuing to see an unprecedented build-up of uncompleted orders in April, after a record rise in March. Similarly, eurozone companies reported a further strong rise in backlogs, hinting at sustained output growth in coming months - especially if supply bottlenecks ease.

Conversely, the UK saw backlogs of work fall for the first time since February 2021, suggesting the output slowdown has further to run. Similarly, Japanese growth may remain subdued in the coming months absent a renewed upturn in demand, given a slight fall in levels of outstanding business during April.

Forward-looking signals are also being sent by the PMI survey's future output expectations indices. Unlike the other PMI series, these data are subjective, based on views among companies relating to their own expected output in 12 months' time, so in theory presenting a longer time horizon for the outlook than the backlogs of work indices.

Sentiment for the next 12 months picked up in the Eurozone and Japan, in April albeit merely remaining close to long-run averages. Steep falls were meanwhile seen in the US and UK, leaving the US index just above its long-run average and the UK index just below its mean. Hence all four surveys are now signalling forward expectations of much weaker growth than had been indicated earlier in the year (prior to March, all four had seen their future expectations indices running at least one standard deviation higher than the long run mean). 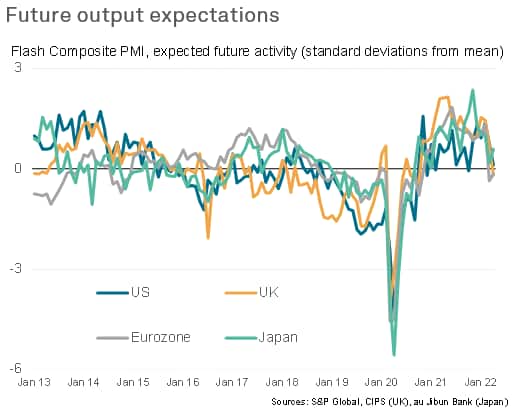 Business expectations were dampened in all cases in part by concerns over rising prices, notably for energy, not just in terms of the impact on companies' costs but also on the impact on customers, as rising inflation poses a key threat to future spending power.

Inflation is already running at multi-decade highs in the US, eurozone and UK, and with the PMI survey data signalling a further surge in companies' costs in April, such elevated inflation readings look likely to persist in coming months. Average input costs across manufacturing and services rose at a record rate in both the US and Japan in April, with near-record rates seen in the eurozone and UK. 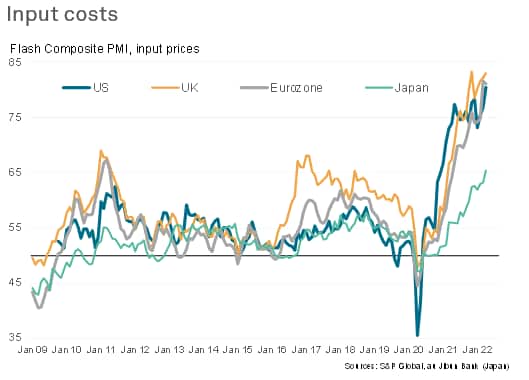 These higher costs fed through to another surge in prices charged to customers. New record rates of increase for average prices levied for goods and services were reported in the US and eurozone, with a near-record high also reported in the UK (where an easing in the rate of increase was often linked to customers kicking back on price hikes). Japan likewise saw rate of selling price inflation accelerate, reaching the highest since the consumption tax hike of April 2014. 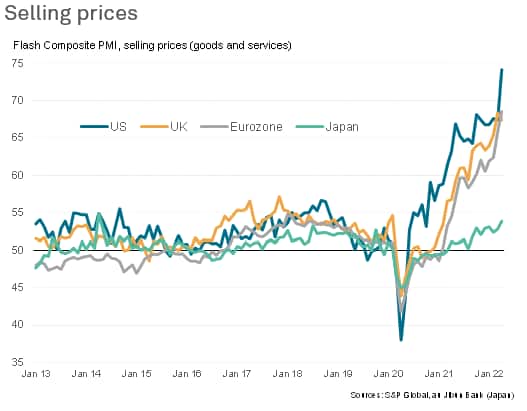 Growth risks tilted to the downside amid multiple headwinds?

In addition to rising prices and the cost-of-living squeeze, firms are also concerned over the prospect of rising interest rates as central bank seek to anchor inflation expectations. The Ukraine war and lingering effects of the pandemic, especially via ongoing lockdowns in China, represent further major concerns among many PMI survey respondents. While the reopening of economies from COVID-19 containment measures still represents a welcome tailwind for the coming months, the big question will be the extent to which whether these mounting headwinds may prevail.