The Caixin PMI surveys showed the Chinese economy retaining solid business activity growth at the start of the second quarter, supported by another strong expansion in the service sector. Growth in the coming months is likely to be sustained at this steady pace according to forward-looking indicators, in part as policy stimulus continues to work its way through the economy. 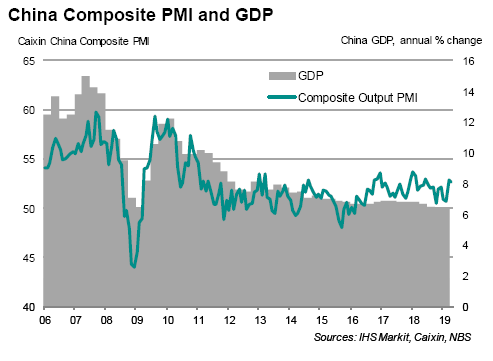 The survey's composite output index dipped from 52.9 in March to 52.7 in April, but nonetheless remained well above recent lows to indicate one of the strongest growth rates of business activity recorded since mid-2018.

The latest gain in economic activity was largely driven by the service sector. Business activity in services rose solidly in April, increasing at the second-fastest pace since May 2012 and one of the fastest rate since 2010. This was in turn buoyed by robust demand conditions, as reflected by a sustained and strong rise in new sales at service providers. Most encouraging was a marked expansion in new export business for services, for which the rate of growth accelerated to the strongest since data for this gauge were first available in late-2014. By contrast, manufacturing output growth in April was much more modest, slowing from March's seven-month high, reflecting only a marginal increase in new orders. After showing a rise in March, new export orders shrank in April, with anecdotal evidence pointing to relatively soft foreign demand. Hiring at factories was again hit as a result. Firms reportedly also remained cautious about inventory building.

Furthermore, not all manufacturing sub-sectors seemed to have benefitted from expansionary macroeconomic policies. Producers of consumer goods appear to have seen a boost from the stimulus, thereby seeing stronger growth of sales and output in recent months. But the production of investment and intermediate goods fell in April, in part related to a deteriorating trade environment.

The latest survey data suggest that fiscal stimulus and monetary easing have largely supported the domestic economy, while significant external headwinds remain in relation to goods exports in particular.

The sustained upturn meanwhile supported growth in the labour market. Overall employment rose for a second straight month in April. However, job creation was connected to greater hiring in the services industries, as opposed to a broad-based increase. Factory employment declined at the start of the second quarter, representing a set-back after having risen for the first time since 2013 in March. 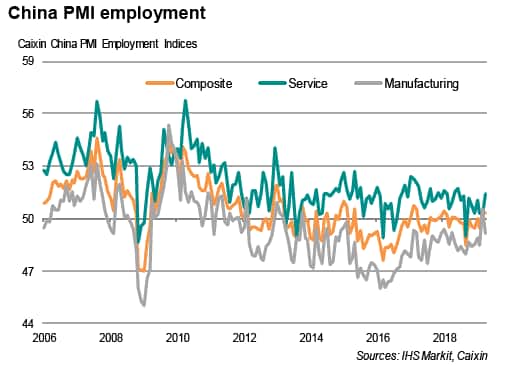