Asia-Pacific exports suffered a severe slump in the first half of 2020 due to the shockwaves from the global COVID-19 pandemic and widespread lockdowns that disrupted industrial production and consumer spending. As global lockdowns have eased, Asia-Pacific exports have rebounded in the second half of 2020, helped by improving export orders from the US and EU. The rebound in China's economy has also helped the rebound in exports from many Asian economies.

RCEP is a positive regional trade liberalization initiative that will help to boost trade and investment flows among the 15 nations that have agreed to the trade deal. The 15 Asia-Pacific economies that make up the RCEP membership together account for around 29% of world GDP. The RCEP members comprise the 10 nations of ASEAN, plus China, Japan, South Korea, Australia and New Zealand. RCEP negotiations commenced in November 2012 and the 15 RCEP member nations concluded negotiations on the text of the agreement on 4th November 2019. The RCEP agreement is expected to be signed by ministers at the 37th ASEAN Summit in Hanoi in mid-November 2020.

RCEP will be the world's biggest free trade agreement (FTA) measured in terms of GDP, larger than the Comprehensive and Progressive Agreement for Trans-Pacific Partnership (CPTPP), the European Union, the recent US-Mexico-Canada Free Trade Agreement or Mercosur.

Although tariff liberalization has already progressed significantly among the 15 RCEP members over the past decade through a wide network of FTAs, RCEP will further reduce tariff barriers. The scope of RCEP includes reducing tariffs on trade in goods, as well as creating higher-quality rules for trade in services, including market access provisions for service sector suppliers from other RCEP countries. The RCEP agreement will also reduce non-tariff barriers to trade among member nations, such as customs and quarantine procedures as well as technical standards.

RCEP significantly extends the scope of trade and investment liberalization through chapters that create a common rules of origin framework as well as strengthening intellectual property protection, trade in services and reducing barriers to investment.

Impact of the COVID-19 pandemic on Asia-Pacific exports

The Asia-Pacific region has been a key beneficiary of global trade and investment liberalization over the past five decades, with many of the region's economies having experienced rapid long-term growth in their exports to key global markets. That structural trend has been supported by multilateral trade liberalization through the GATT and WTO trade rounds, as well as by a growing network of regional and bilateral free trade agreements within the Asia-Pacific region.

However, this long-term trend of rapid export growth has suffered some setbacks in the past three years. The first shock was due to the escalating US-China trade war in 2018 and 2019, which resulted in some disruptions as well as trade diversion effects due to rising bilateral tariff barriers for trade between China and the US. The negative impact on some Chinese exports resulted in wider supply chain implications for many other Asian countries. 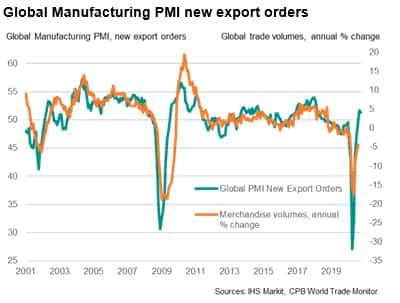 These disruptions to Asia-Pacific trade escalated further during the first half of 2020, as the COVID-19 pandemic triggered lockdowns and travel bans across the world, resulting in sharp declines in exports of goods and services from many Asia-Pacific economies. The easing of lockdowns in key markets such as the US and EU since June has subsequently triggered a rebound in manufacturing exports from many Asia-Pacific economies, as sectors such as autos, pharmaceuticals and electronics have shown strong growth in output during the third quarter of 2020. However, with international tourism travel prohibited across most of the Asia-Pacific region, exports of services have remained weak during the second half of 2020. 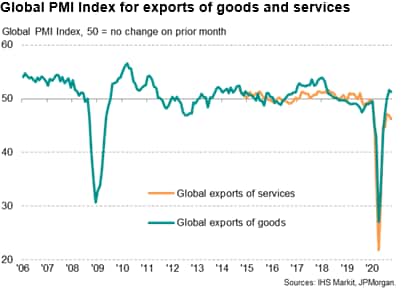 Manufacturing sector export orders have shown a strong recovery across the Asia-Pacific during the third quarter of 2020, matched by a rise in the PMI export orders data for the region, as the widespread easing of lockdown restrictions in the US and EU markets helped to drive a rapid rebound in Asian exports of manufactures. With the electronics sector being a key segment of the manufacturing exports of many East Asian economies, the strong rebound evident in global electronics new orders highlights the recovery in Asian manufacturing exports in the second half of 2020. 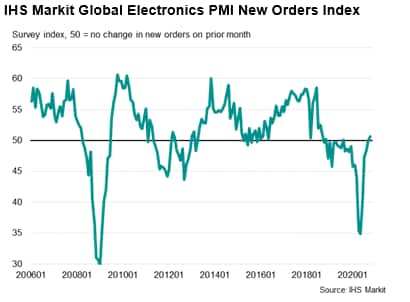 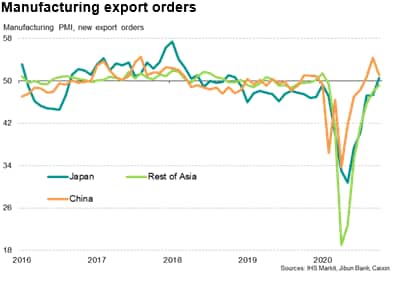 Following considerable disruption to Asia-Pacific trade flows during 2018-2020 due to the US-China trade war and the impact of the pandemic, the implementation of RCEP will help to further reduce barriers to regional trade flows within the Asia-Pacific region over the medium to long-term.

While the RCEP deal is not as comprehensive as the CPTPP deal in terms of scope and range of trade issues covered, its membership includes a larger group of nations, notably reflecting the membership of China, which considerably boosts the total GDP of RCEP members compared to the CPTPP membership. The RCEP also creates a trade liberalisation framework that can be built on and strengthened through further rounds of trade negotiations.

A key priority area for further RCEP negotiations is likely to be e-commerce, given the rapidly growing importance of online trade in many Asia-Pacific economies, since a substantial agreement was not achieved in the original RCEP framework. Other countries could also potentially join the RCEP grouping in future, widening the economic impact of RCEP trade and investment liberalization measures.

India, which had been one of the nations involved in the RCEP negotiations at an earlier stage, eventually decided in 2019 not to join the RCEP deal. India's decision not to join the RCEP deal reflects considerable domestic concerns amongst political parties as well as industry groups in India about the potential economic shock to Indian industries from dismantling tariff barriers for trade with the other RCEP member nations. However, the other RCEP members have left the door open for India to join at a later date.

A potential trade policy issue for the next US Administration is that the implementation of RCEP will leave the US outside of both RCEP and CPTPP, the two major Asia-Pacific regional free trade agreements. However, US multinationals will be able to benefit from the RCEP provisions through their subsidiaries operating within member countries.

In the overall Asia-Pacific trade policy landscape, the RCEP deal is a major further step by APAC governments to liberalize regional trade flows, following the implementation of both the Japan-EU Economic Partnership Agreement (EPA) and the CPTPP deals in quick succession during in 2019.

Once ratified and implemented by member nations, the RCEP free trade agreement will become a building block for further advancing trade liberalization in the Asia-Pacific, both through expanding the scope of the existing agreement and through the accession of other nations to the agreement.