However, while an easing of supply delays helped to reduce raw material input cost inflation, persistent cost pressures caused by rising wages and energy bills led to the sharpest rise in average prices charged for goods and services in the PMI survey's history.

The strength of the rebound in business activity signalled by the PMI provides welcome evidence that the economy has so far shown encouraging resilience in the face of the Omicron wave, but the intensification of inflationary pressures will add to speculation of an increasing hawkish stance at the ECB. 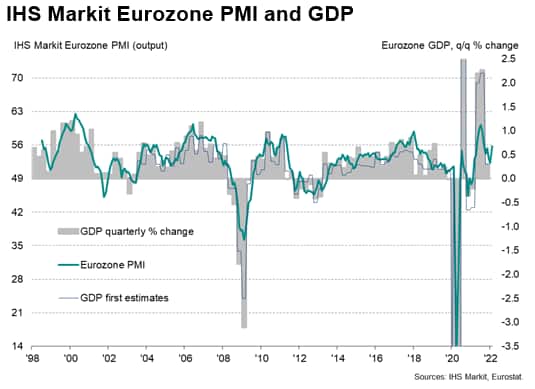 The headline IHS Markit Eurozone Composite PMI® surged 3.5 points in February (its largest monthly gain since March of last year), up from 52.3 in January to 55.8, to signal a sharp acceleration of economic growth, according to the preliminary 'flash' estimate*. The latest reading indicates the fastest rate of output growth since last September.

The acceleration in growth follows two months of subdued expansions as the rise in COVID-19 infections associated with the Omicron variant prompted an increase in virus containment measures. February saw these restrictions ease to the lowest since November. 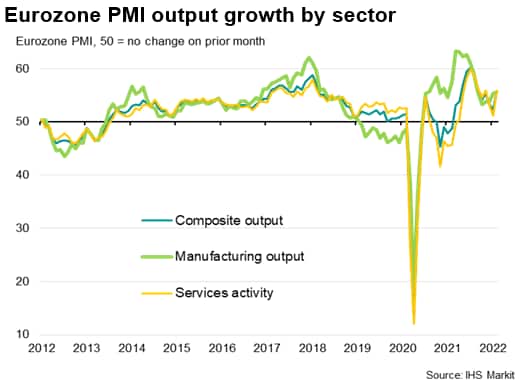 The greatest improvement was seen in the service sector. Having almost stalled in January amid the tightened virus-fighting measures, service sector activity growth rebounded in February to the fastest since last November. Looser restrictions enabled a particularly strong rise in consumer-facing activity and travel & tourism.

Manufacturing output growth also accelerated slightly, attaining the fastest expansion since last September, thanks in part to improved supply availability. The incidence of supplier delivery delays was the lowest since January of last year.

Demand also picked up during the month. Overall, new orders rose to the greatest extent since last August, with six-month highs seen in both manufacturing and services, linked to easing supply constraints and the opening up of the economy.

The upturn in demand led to a steep rise in backlogs of uncompleted work, which showed the largest increase for six months. Backlogs rose especially sharply in manufacturing, as the inflow of new orders exceeded the gain in production recorded during the month, though also rose at an increased rate in services.

The combination of rising demand, an easing of COVID-19 containment measures and fewer supply bottlenecks helped push future output expectations to the highest since last June, with improved optimism recorded in both manufacturing and services. 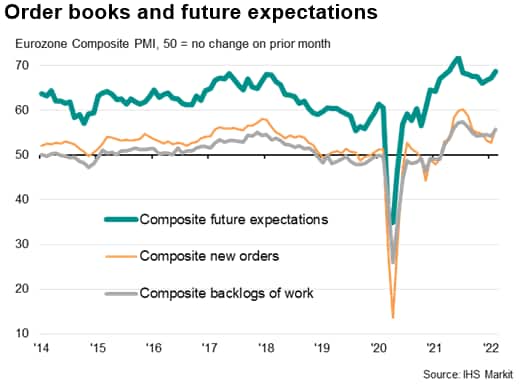 The easing of supply constraints recorded during February also helped moderate manufacturers' input cost inflation. Although average prices paid for materials rose sharply again, the rate of increase was the slowest since March of last year. 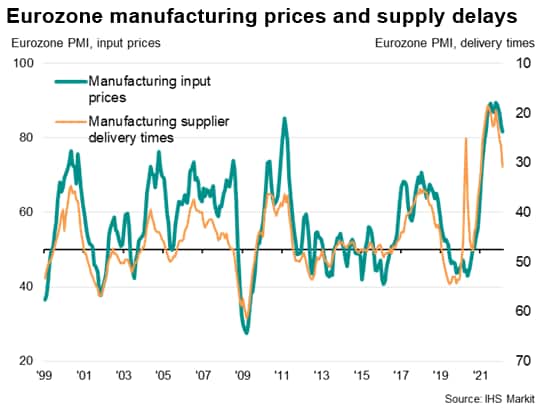 However, although raw material price inflation in manufacturing eased, service sector input cost inflation accelerated to a record high reflecting rising wages and soaring energy costs. The resulting overall rate of input cost inflation seen across both sectors rose to the second-highest on record, surpassed over the past 24 years only by that seen last November. 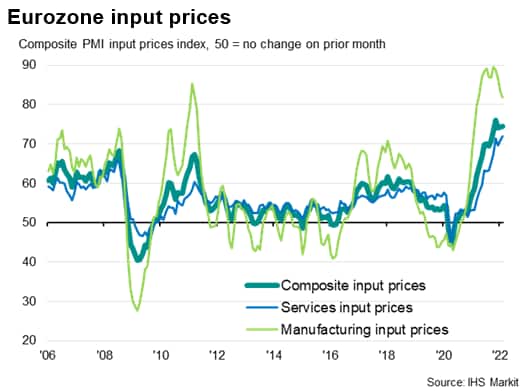 Average prices charged for goods and services rose at the sharpest rate yet recorded by the survey as firms increasingly sought to pass persistent higher cost inflation on to customers. A record high rate of inflation in the service sector was accompanied by a near-record rate in manufacturing.

The intensifying selling price pressures seen in February therefore suggest that consumer price inflation could also rise further during the month, having already risen to 5.1% in January - the highest in the history of the euro. 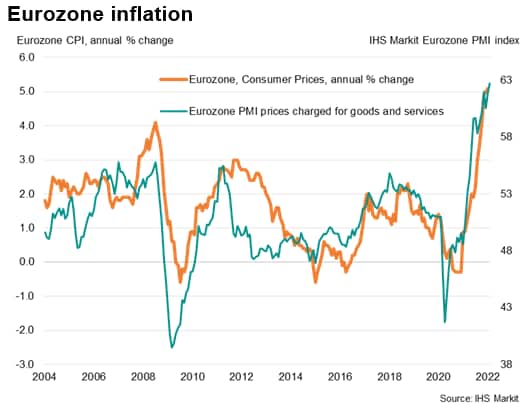 While the rate of expansion signalled by the PMI remains far weaker than witnessed during the rebound of mid-2021, the accelerating rate of growth will provide welcome news that the eurozone has weathered the Omicron wave without falling into decline, and that the impact of the latest wave appears to have been short-lived. However, it is clear that the supply side issues emanating from the pandemic remain in force, albeit with the main upward impetus now coming from wage and energy pressures instead of escalating materials prices.

As such, the data will inevitably add to the voices of the hawks at the ECB to encourage an earlier, and more aggressive tightening of monetary policy after the emergency stimulus implemented during the pandemic. 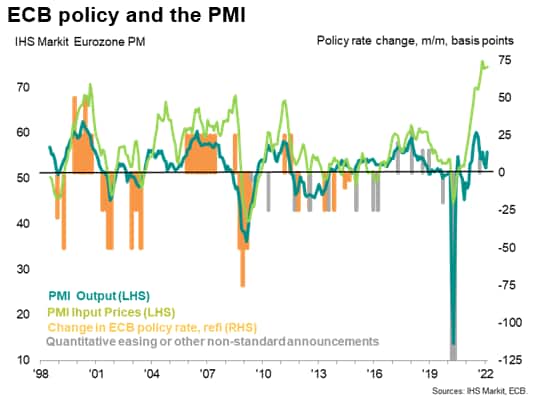