Survey data show that business gloom surrounding the path of the global economy and geopolitical uncertainty had begun to fade at the start of 2020, prior to the 2019-nCov outbreak.

Anecdotal evidence from global survey panellists shows that the worldwide outlook had improved since last autumn, when political tensions and weaker economic and trade data signalled an uncertain future for businesses. As a result, firms' expectations for future output were the strongest for nine months in January.

However, the coronavirus outbreak in China which intensified in late-January offers a potent threat to the world economy in the near-term that is yet to be captured by PMI survey data. Thus, upcoming surveys will be keenly awaited for signs of any renewed heightening of business uncertainty, particularly in the Asia-Pacific region, and the potential of the virus to derail the nascent recovery in global economic conditions.

IHS Markit's Purchasing Managers' Index® (PMI®) surveys ask contributing companies to report on changes in key business metrics such as activity, new orders, exports, input prices, inventories and employment, and to also provide views on their future expectations. Globally, the surveys compile responses from around 28,000 companies in over 40 countries monthly.

Alongside these responses, panellists are invited to provide additional qualitative information on the reasons as to why these variables or (in the case of future output expectations) their views have changed from the previous month. Our panel comments tool collects data tracking the frequency of words or phrases mentioned in these qualitative replies. Analysing these data over time gives helpful insights into key trends affecting businesses both nationally and globally, and thereby reveals the driving forces behind changes in the 'hard' data.

The Future Output Index from the J.P. Morgan Global Composite PMI series rose to the highest for nine months in January. This indicates a firm recovery in businesses' outlooks regarding activity over the coming year, which hit a post-GFC low last August. 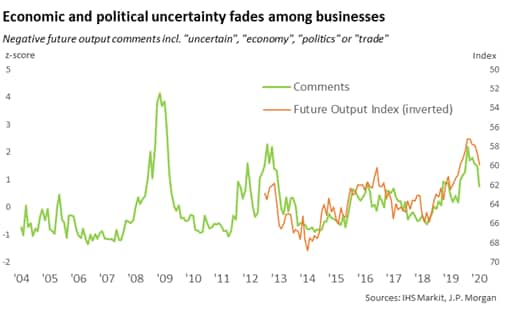 Panel comments illustrate the reasons why businesses had generally improved their forecasts at the start of the new year. Many of the factors that plagued optimism during 2019, such as the US/China trade war, Brexit negotiations, protests in Hong Kong SAR, and other political tensions have either diminished or been resolved, giving firms hope that global growth will strengthen. As such, the frequency of comments from survey panellists including words such as "uncertainty", "recession", "politics" and "trade" has also dropped to a nine-month low, demonstrating the impact these trends have on future output expectations*.

A key trend, the US/China trade war, reached a more positive stance in December when the two sides agreed a "phase one" trade deal that included a pause on further tariff escalations and commitments on purchases, intellectual property and foreign exchange policy. Subsequently, the global trade environment appears to have improved, with fears at surveyed business of a negative impact on exports over the coming year easing to one of the lowest levels since the trade war emerged in 2018. 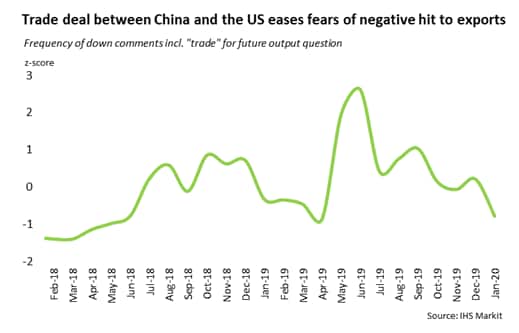 Meanwhile, European firms, particularly those in the UK, Ireland and Germany, breathed a sigh of relief as the UK general election confirmed a clear pathway for Brexit on 31st January and the risk of a no-deal scenario faded away. Uncertainty surrounding the impact a disruptive Brexit process could have on Europe's economy diminished, leaving companies to drum up fresh plans for investment and growth of business activity. There remains a further risk during 2020 as trade negotiations intensify towards an end-of-year deadline, but for now firms are much less downbeat about future economic conditions. However, while these worries have moderated, panel comments show that other concerns linger. In particular, Hong Kong SAR business activity remains muted due to ongoing protests since June. Our comments tracker shows confidence still affected by the unrest, with companies highlighting a lack of consumer spending in particular, although the overall impact has eased since November, when it reached a peak. Economic gloom also lingers in other surveyed countries, most notably in South Africa, Korea, Singapore, and Mexico. 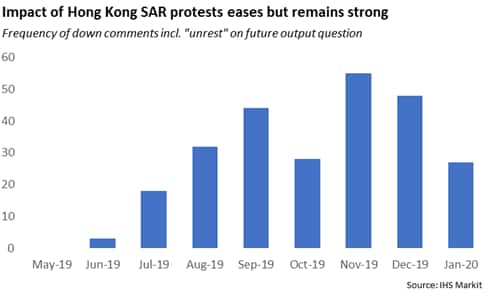 Nevertheless, overall global uncertainty is easing and placing greater optimism on the future path of the economy. Comments from our global panel show economic sentiment on the rise, which can be a strong predictor for global growth. Tracking the difference in positive and negative economic sentiment comments since 2004 holds a 64% correlation with global GDP growth. Thus, the recent upswing in the tracker suggests global economic growth may be bottoming out at the start of 2020. 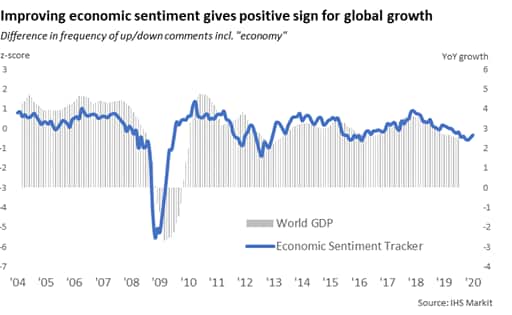 One threat to the potential recovery in global growth this year is the coronavirus outbreak that emerged in China in late-January. Now labelled a global health emergency by the World Health Organisation, the virus appears to pose a significant economic risk to the Chinese economy amid city lockdowns, factory and office closures and negative impacts on retail and tourism. Surrounding countries will also be affected, with many industries relying on China as a key link in global supply chains. (Click here for further analysis.)

As such, China and other PMI surveys are likely to signal a hit to business conditions in February, with panel comments toward economic uncertainty also likely to rise. Latest survey data for China were collected prior to 25th January so will not have reflected any economic impact from the outbreak. Thus, the next data release in early-March will likely be the first to capture the expected short-term shock to business activity.

What this does mean is that January PMI data and comments analysis pinpoints a specific point in time for the global economy: one where the underlying business cycle is properly observed. Free from outside shocks, it appears that the world was on a path to recovery, strengthened by easing uncertainty and rebounding confidence among firms as to their future prospects. The year 2020 could be starkly different to 2019 in that regard, though this is by no means assured, with the economy still vulnerable to returning trade tensions and a drawn-out shockwave from the coronavirus outbreak. This makes the PMI an even more vital barometer of global economic performance to watch.