PMI signals positive end to 2018 for Japanese economy, but highlights risks ahead

The Japanese economy continued to demonstrate underlying resilience at the end of 2018 despite recent natural disasters and global trade tensions, according to the December Nikkei PMI. However, the survey brought signs of waning demand amid deteriorating global trade conditions, which may further delay the achievement of the Bank of Japan's 2% inflation target.

The latest Nikkei PMI data showed the Japanese economy enjoying resilient growth at the end of 2018, maintaining the longest period of continuous expansion since the survey started eleven years ago.

At 52.0 in December, the Nikkei Composite PMI Output Index (which covers manufacturing and service sectors) indicated a modest rate of improvement in business conditions, which is largely similar to recent months. 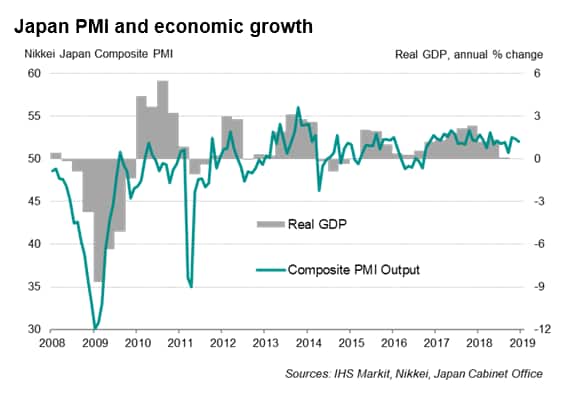 The latest reading also extended the current upturn to 27 months, the longest period of growth in the survey's history, underscoring the resilience of the economy despite headwinds from global trade developments and recent natural disasters.

… but insufficient to lift inflation to target

The modest rate of economic expansion nevertheless remained disappointing from a policymakers' perspective. Without a stronger pickup in demand, firms' operating capacities were scarcely tested. The level of unfinished work was stable in the second half of the year, which limited the extent of output growth by constraining companies' appetite to expand.

While December saw a return to growth for backlogs of work, the increase was only marginal, suggesting that business activity is unlikely to scale-up in coming months.

Supporting the expansion in business activity was an increase inflow of total new business. However, order book growth remained the weakest in six months during December, coinciding with a decline in new export business.

Lower export sales were mostly connected to softer overseas demand for Japanese manufactured products. In fact, the lacklustre performance in goods export orders was a key drag to manufacturing growth in the second half of the year. 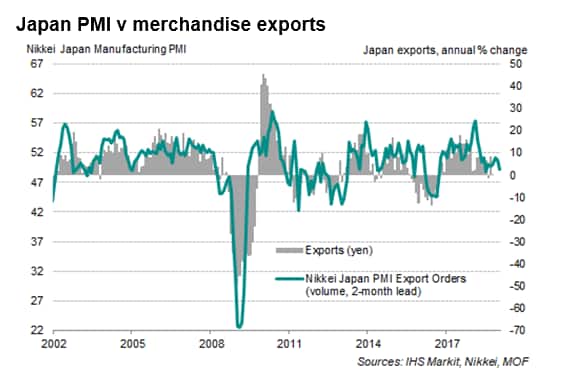 Despite a noticeably higher rate of output growth in December, survey indicators suggested that it would be difficult to maintain this pace of expansion in coming months. Growth of new orders remained notably slower than seen on average in the first-half of the year, while business confidence among manufacturers fell to its lowest in just over two years.

Firms were concerned that trade wars, an imminent hike in the consumption tax and ongoing shortages of materials - such as electrical components and steel - will weigh on output in the year ahead.

While the latest survey has not raised any alarm bells about Japanese growth, signs of waning demand, particularly from external markets, support the Bank of Japan's concern of heightened risks to the economic outlook. This suggests that the BOJ will have to maintain its ultra-accommodative stance for longer, adding pressure on central bankers to address the increasing side effects of prolonged easing, such as banks' profitability.