Machinery and Equipment sector output falls again in May

The Global Machinery & Equipment sector recorded a back-to-back decline in output amid severe supply delays in May, according to the latest PMI data. More encouragingly, the sector also recorded a slight rise in order book volumes, sustained job creation, and quicker uplift in inventories.

Output falls marginally in May

The seasonally adjusted Global Machinery & Equipment PMI Output Index registered 48.7 in May, running below the crucial no-change mark of 50.0 to signal a further fall in factory production within the sector. The latest Output Index reading was higher than that in April (47.3), indicative of a slightly reduced rate of contraction, and one that was only marginal overall. 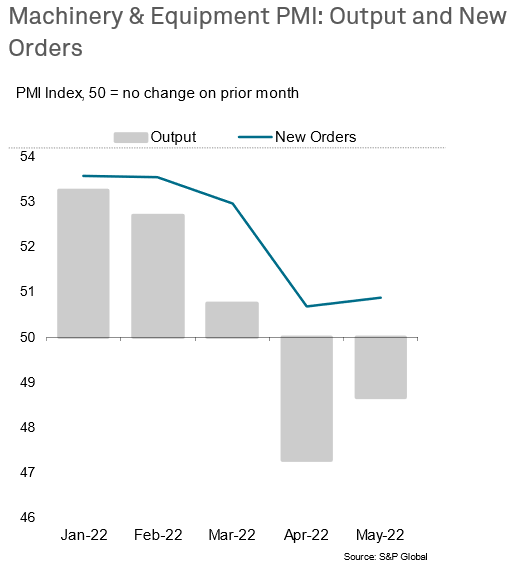 The sustained decline in output across the sector was in spite of a further upturn in order book volumes in May. The respective seasonally adjusted New Orders Index remained above the neutral level of 50.0 to signal a twenty-first successive monthly increase in new work but, registering at 50.9 in May, pointed to just a mild rate of increase that was the second slowest in the current sequence (behind only April - index reading 50.7).

Combined, these indices suggest some concerning trends. First, output is being constrained relative to order book inflows. Second, slower rates of order book growth point to an easing of demand following a sharp uplift through late 2021 into the opening months of 2022, which is likely to further dampen output across the sector.

The drop in output at a time of rising (albeit weak) order book inflows suggests that - in line with trends seen across the global manufacturing sector as a whole - material shortages and ongoing supply issues had curbed machinery & equipment production in May. The PMI's Suppliers' Delivery Times Index highlighted another severe lengthening of lead times for inputs during May, with the latest index figure amongst the lowest on record. That said, the reading also suggested that delays were the least widespread since February 2021, with the index reading of 35.5 the highest since that point, hinting that supply constraints may be alleviating slightly.

Further evidence of ongoing supply constraints was nevertheless provided by the PMI Backlogs of Work Index in May, which pointed to another sharp rise in the level of work in hand (but not yet completed) at Machinery & Equipment firms. Capacity pressures have intensified in each month since October 2020, but do not appear to be supporting production, according to the latest data, most likely as companies are awaiting inputs to finish goods. 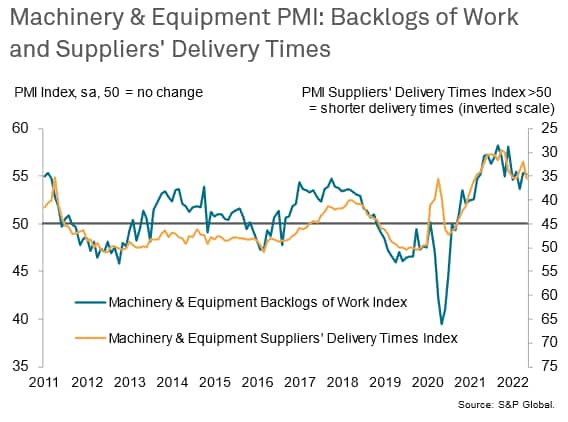 May data also pointed to a noticeable acceleration in buying activity at Machinery & Equipment producers, likely the result of efforts to combat material shortages and supply delays. At 54.2, the Quantity of Purchases Index signalled a sharp rise in purchasing activity in May, but one that was the second-weakest since September 2020. This suggests that firms are still attempting to bulk their inventories amid ongoing supply chain resilience worries.

Nonetheless, greater input buying was reflected in a tenth successive monthly increase in pre-production inventories in May. Moreover, the respective seasonally adjusted index hit its highest level since December 2021, signalling the quickest rate of expansion since that date. Stocks of finished goods continued to decline, however, with the rate of reduction accelerating on the month. 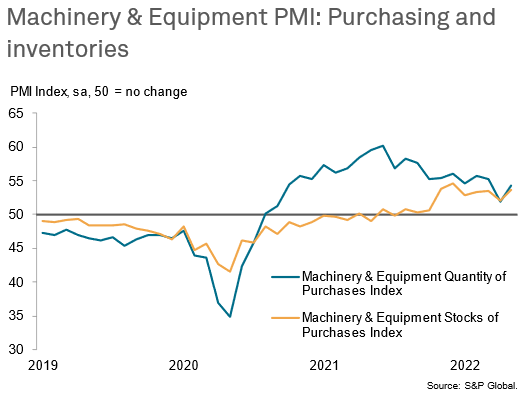 Inflationary pressures retreat, but remain amongst steepest on record

Turning to prices, the latest PMI data pointed to a further easing of inflationary pressures from recent peaks, although the rates of increase remained steep overall. Adjusted for seasonal variance, the Input Prices Index fell to a three-month low of 69.9 in May, but was still amongst the highest on record and indicative of a rapid rate of inflation overall.

Concurrently, factory gate charges levied by Machinery & Equipment producers increased further, stretching the current sequence of price hikes to nearly two-years. In line with the trend for input prices, the rate of increase retreated since April, but was still the eighth-strongest in the series history.

The easing of inflation rates signalled by the PMI data provide some good news for the sector, suggesting that cost pressures and subsequently, factory gate price hikes, may be peaking, in part due to the weaker lengthening of lead times for inputs. 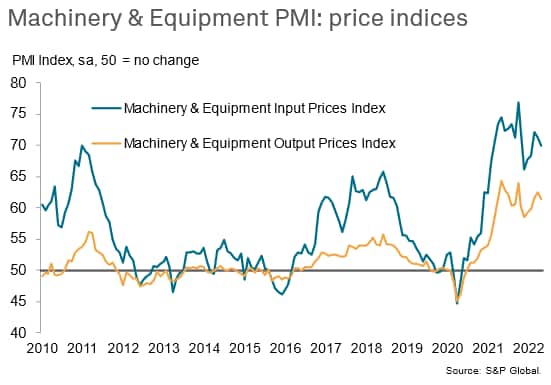 Looking ahead, the PMI data suggest a slightly mixed bag. Sentiment towards output over the next year moderated to a 22-month low in May, although firms remained upbeat on average (Future Output Index at 60.6). The rate of job creation accelerated in May, however, suggesting that although sentiment is dampened by supply issues, inflationary pressures and geopolitical issues, companies do expect conditions to pick up again and as such are taking on additional staff. 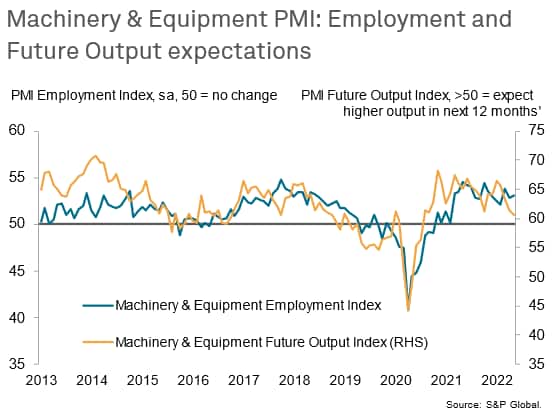 Industrial Goods sector as a benchmark

The recent performance of the Machinery & Equipment sector is perhaps less concerning when compared to the benchmark of Industrial Goods (the parent sector in the PMI suite). There was relatively little divergence in performance in May, with the Machinery & Equipment PMI data suggesting broadly similar trends. The only notable divergences between the two sectors were for:

As such, using the parent Industrial Goods sector as a benchmark, the PMI data suggest that the performance of the Machinery & Equipment sector is relatively in line with the wider sector, and perhaps slightly better in some respects. 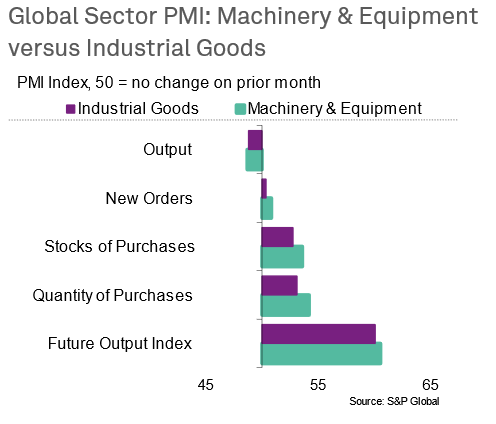 An underperformance of the Machinery & Equipment sub-sector is however evident if comparing to the wider Industrials group - which includes services firms - in the sector PMI suite.

Overall Industrials output rose in May amid a further uplift in new orders, a stark comparison to the falling production trend recorded for Machinery & Equipment.

Examining the relative trends indicated by the May PMI data within the Industrials sector group also provides valuable information on drivers of performance and divergences between sub-sectors.

Industrial Goods was the main drag on output in the wider Industrials sector group during May, according to the PMI data with both the underlying sub-sectors (Machinery & Equipment and Construction Materials) seeing output decline on the month. These are also sectors seeing some of the most widespread supplier delivery delays in recent months.

Conversely, Industrial services was a bright spot and the key driver of growth in May, with output in the sector rising strongly amid a sharp, albeit slightly weaker, expansion in new orders. The Global Transportation sector meanwhile recorded the first expansion in output since December 2021. 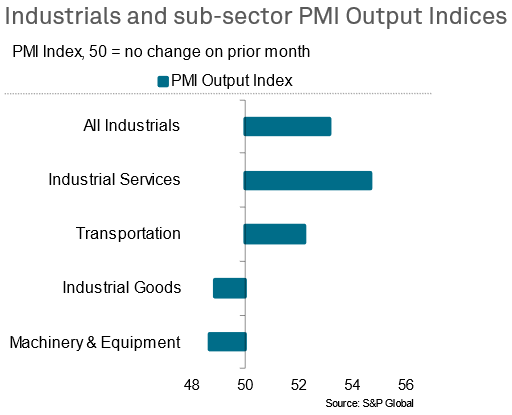 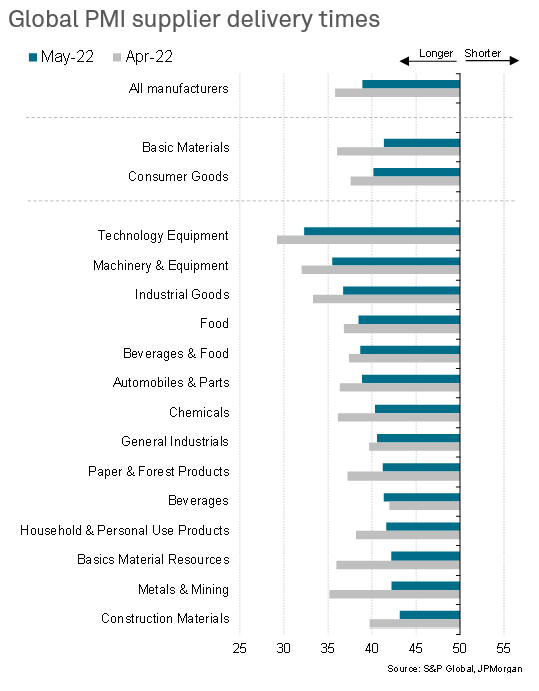 Overall, the May PMI data point to concerning trends across the Machinery & Equipment sector. Firms are clearly struggling to source inputs amid ongoing supply issues, which hampered production again midway through the second quarter. Additionally, the data provided some signs that demand was cooling, adding further challenges and suggesting that production growth may not be propped up by a strong pipeline of new work.

Some positive news came from the survey's price indices, which pointed to a sustained retreat in the rate of cost inflation in May and subsequently, a slower upturn in factory gate costs. Margins are likely to remain under pressure, however, as the overall increase in costs is rapid in the context of historical data.

Additionally, strong job creation suggests that firms are not substantially concerned that a major downturn is imminent, with hiring also reflecting a slight alleviation of supply issues and the expectation of production growth once inputs can be sourced. Benchmarking the performance of the Machinery & Equipment sector against the broader Industrial Goods sector suggests relatively little divergence and that conditions reflect the overall challenge on manufacturers at present, a view that is affirmed using other manufacturing sub-sectors in the industrials category for context.