Although global manufacturing output growth ran at one of the fastest rates seen for over a decade in June, capacity constraints continued to develop, reflecting a lack of labour and a record worsening of supplier delivery times. Prices continued to rise sharply as a result.

The survey data also reveal a widening disparity between strong growth in the developed world and a near-stalling of output in the emerging markets; a divergence which can be largely attributed to differing vaccination rates and further waves of COVID-19. Steep downturns in several key Asian economies could pose a further threat to global supply chains in coming months.

The JPMorgan Global Manufacturing PMI, compiled by IHS Markit from its proprietary business surveys, registered another strong rise in factory output during June, rounding off the best quarterly expansion for a decade.

The upturn was largely attributed to surging demand as many economies around the world continued to open up from COVID-19 related lockdowns and restrictions, while rising vaccination rates also lifted sentiment and demand among businesses and consumers alike, notably in Europe and the US. 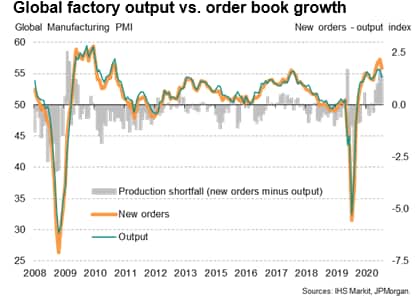 However, the survey data also show that new orders rose even faster than output for a fourth month running in June, indicating that demand over the past two months is running ahead of production to a degree not witnessed since 2009 with the exception of February last year .

Looking at the anecdotal evidence provided by companies contributing to the PMI surveys, this 'production shortfall' could be principally attributed to capacity constraints, both in terms of staffing and component supplies.

The scale of staff shortages was reflected in global growth of employment running behind order book growth to one of the greatest extents for 11 years in June. The shortfall of payroll numbers to new orders was especially acute in the developed markets.

Rising shortages of inputs were meanwhile reflected in an unprecedented lengthening of suppliers' delivery times in June.

While the PMI survey do not track the effect of demand running ahead of supply for labour via wage growth, it does monitor raw material prices. Average prices paid by manufacturers for their inputs continued to rise at one of the fastest rates for a decade in June, due principally to this sellers' market environment. 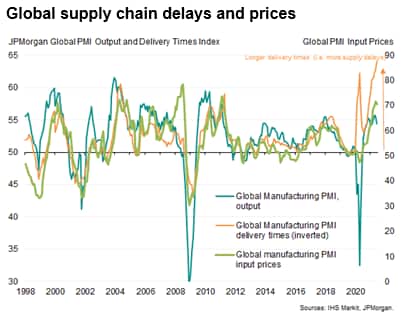 A factor exacerbating the recent deterioration of global supply chains has been the renewed damaging effect from COVID-19 on manufacturing performance in many countries that are battling rising infection rates. While high vaccination progress is helping to ensure production and demand are continuing to surge in the US and Europe, a very different picture is emerging from countries which have low vaccination rates and rising case numbers. 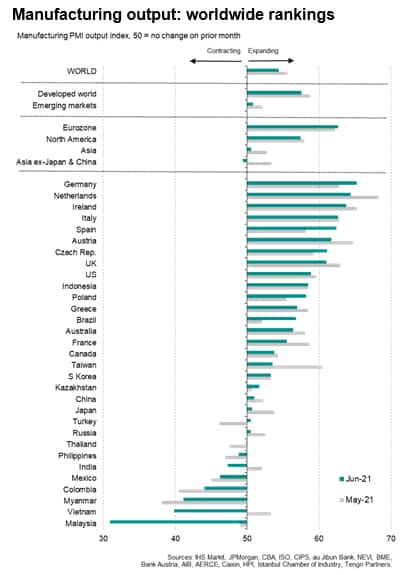 Especially strong declines were recorded in Malaysia and Vietnam during June, with a renewed output drop also reported in India. Production in the Philippines declined for a third successive month and Thailand's output fell for a second month. Marked slowdowns were meanwhile seen in Taiwan, Indonesia and Japan, while factory output in China grew at its slowest rate since March of last year.

In all cases, the PMI survey responses highlighted how production was being adversely affected by fresh measures adopted to tackle rising virus case numbers, either in domestic or export markets. 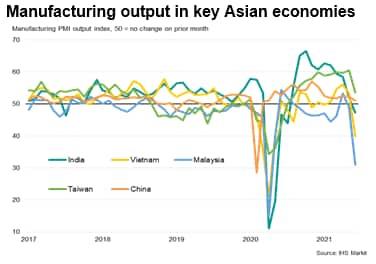 It is not just Asia which is seeing renewed weakness of manufacturing performance, however, with output in Russia coming close to stagnation again in June as rising virus numbers disrupted the economy, and a further steep fall in output was recorded in Mexico.

As a result, while developed world production continued to grow at a rate close to decade-highs in June, emerging market output growth came close to stalling, its lowest since June 2020. 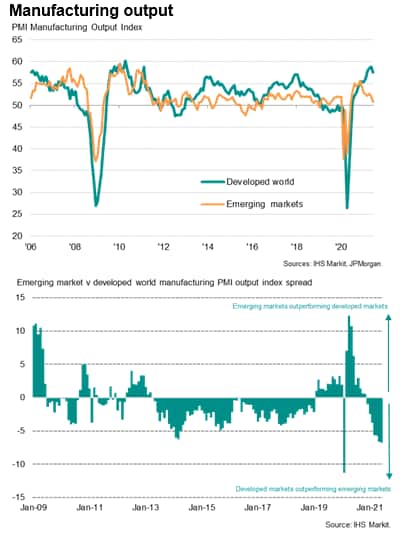 Excluding the factory shutdowns seen in China early last year, the emerging markets as a whole are consequently underperforming the developed markets to a degree unprecedented since comparable PMI data were available over a decade ago.

This divergence underscores the vital role that vaccination progress has in allowing economies to return to growth, but it is also a reminder that supply chain delays may persist for some time. Asian supply of exported goods and components in particular is clearly continuing to be heavily disrupted, which is in turn likely to mean price pressures remain more persistent than would otherwise be the case.