Global economic growth accelerated in June thanks primarily to rebounding business activity in mainland China after lockdowns related to the Omicron wave were eased. However, trends elsewhere were mixed: other major emerging markets reported further solid or reviving growth, but developed world output growth slowed to the second-weakest since January 2021 led by worsening performances in the US and eurozone. June consequently saw the strongest outperformance of the emerging markets relative to the developed world for a decade.

Such a slowdown of growth and employment is also signaled by a further souring of business confidence in the outlook to the lowest for 21 months, with companies growing gloomier on the back of the rising cost of living and tightening financial conditions. 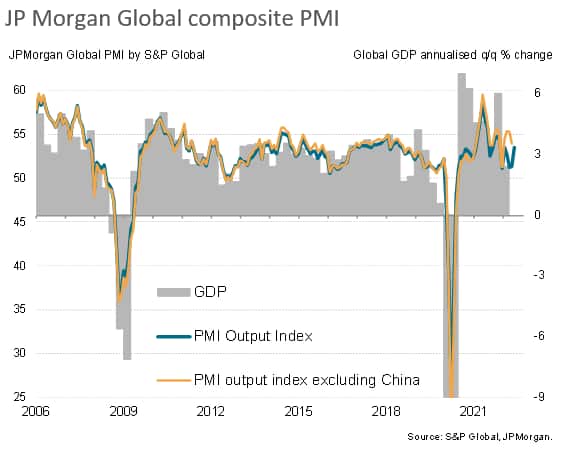 Global economic growth accelerated in June, according to PMI survey data compiled by S&P Global and sponsored by JPMorgan. The headline PMI, covering output of both manufacturing and services, rose from 51.3 in May to 53.5. Both sectors saw improved rates of expansion, with the service sector growing at the fastest rate for four months and the factory sector returning to growth after two months of falling production. 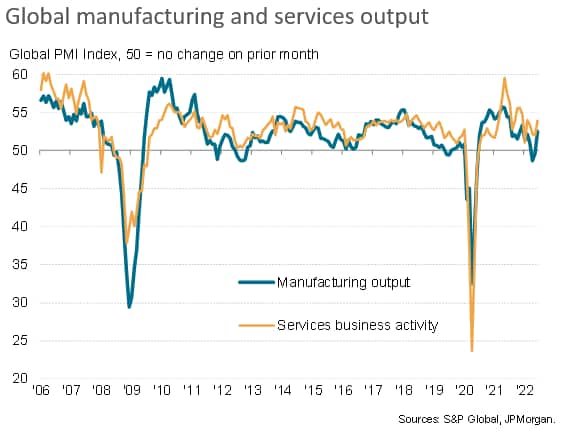 The big change compared to May was the resumption of strong growth in mainland China after three months of severe downturns due to restrictions imposed to halt the spread of the Omicron variant. China's expansion in June was one of the strongest recorded over the past decade and reflected resurgent business activity levels in both manufacturing and services.

If China is excluded, global growth slowed in June, down to the slowest since January to register the second-weakest performance since the Delta wave impact at the end of 2020.

However, the improvement was not confined to China. Russia also saw a return to growth after three months of war-related contraction thanks to a revival of service sector growth, albeit registering only a marginal expansion of output thanks mainly to falling exports. Growth also picked up in Brazil to hit the highest since April 2007 and remained impressively strong in India. 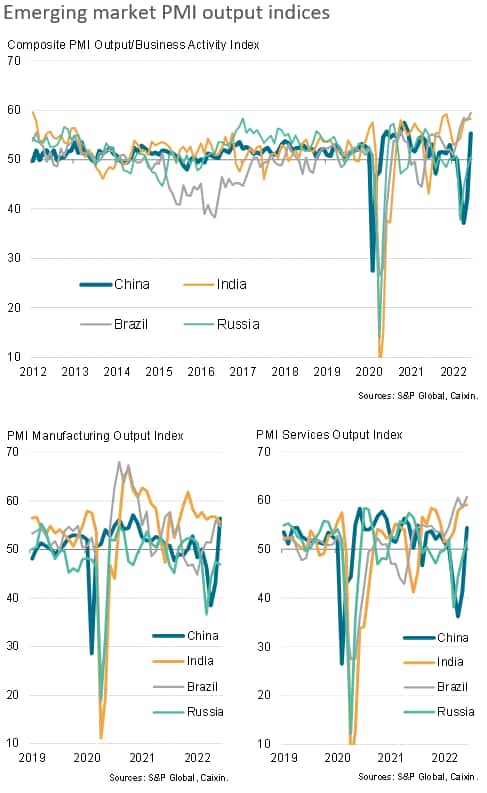 In contrast, output growth in the developed world slowed in June to the second-weakest since January 2021, with only the Omicron-related hit to output at the start of 2020 seeing a worse performance. Especially slow rates of expansion were seen in the US and eurozone, with more robust rates of increase recorded in the UK and Japan thanks to better service sector performances. The latter notably recorded the strongest overall expansion since last November. However, even in the UK and Japan growth rates remained subdued, with manufacturing broadly stagnant in all four major developed markets. 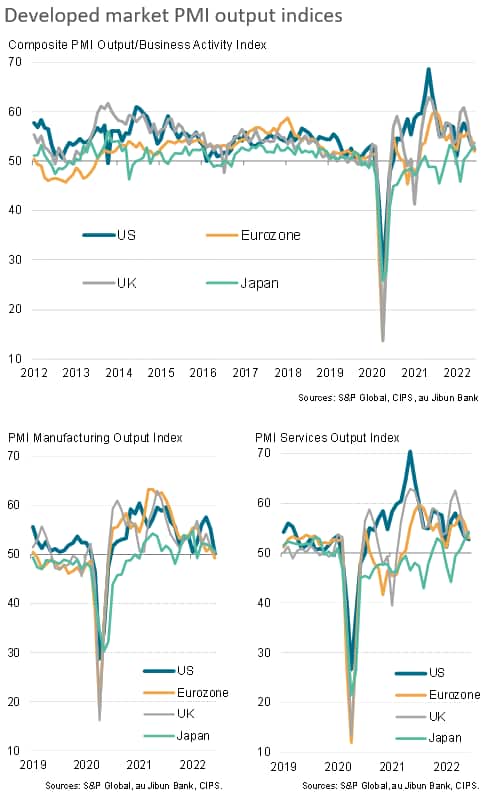 Barring the initial days of the pandemic, June consequently saw the strongest outperformance of the emerging markets relative to the developed world for a decade. 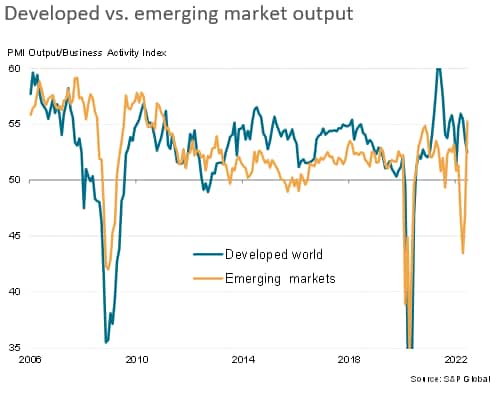 Demand growth at near two-year low

Trends in demand, as measured by inflows of new orders, pointed to an even greater developed-emerging market divergence, but also signalled an increased risk of global growth weakening further in coming months. Measured globally, new orders for manufactured goods rose only fractionally in June, the near-stalling of demand representing the worst performance since the initial COVID-19 downturns of early-2020. New business placed at service providers meanwhile rose globally at the slowest rate since January 2021. 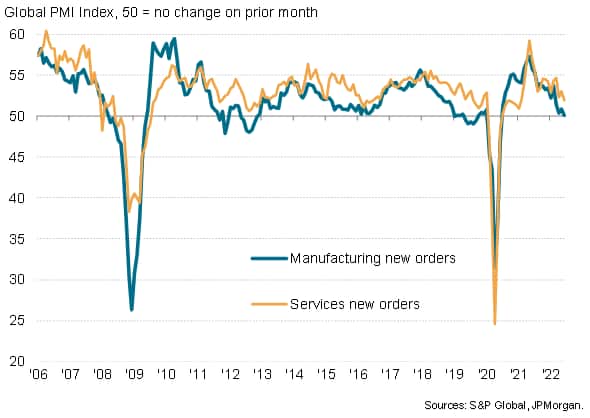 Although new orders growth accelerated in all four of the largest BRIC economies, led by near-record rises in Brazil and India, demand growth faltered in the four largest developed markets. New orders for goods and services fell in the US, stagnated in the eurozone, fell to only a very modest rate in the UK and cooled in Japan. 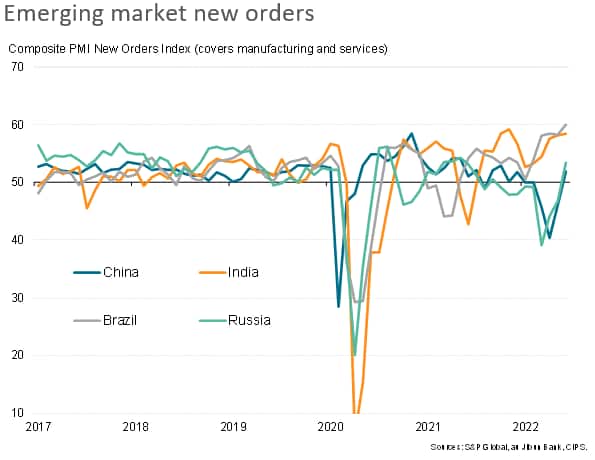 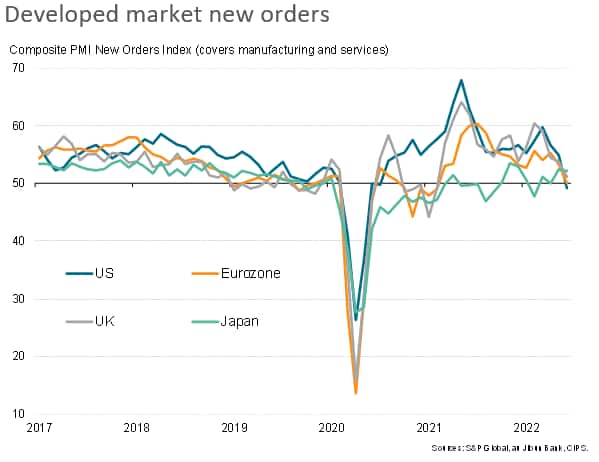 The resulting combined global increase in new orders for goods and services was the smallest registered since July 2020.

This weakening of new business growth meant that, unlike prior months, companies' backlogs of orders failed to increase to any material degree in June, the marginal increase in backlogs being the smallest recorded since February 2021.

Although employment meanwhile continued to rise at a solid rate globally in June, this stalling of demand typically precedes a slowdown in hiring. 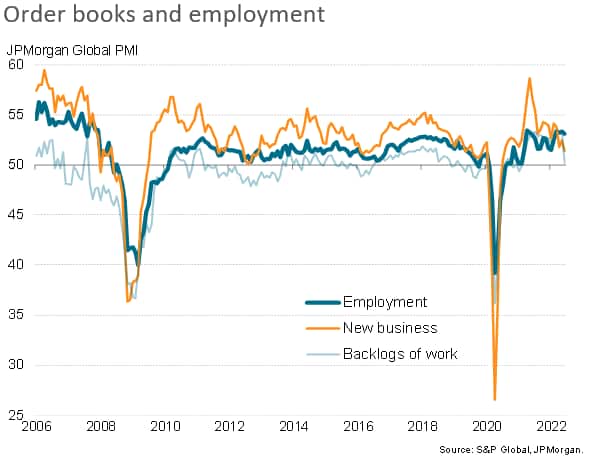 Slowdowns in hiring and a further weakening of output growth are also indicated by the PMI survey's gauge of business expectations about the next 12 months. Optimism fell in June to the lowest since September 2020, deteriorating markedly in both manufacturing and services.

Gloomier prospects were most commonly associated with companies growing increasingly concerned about the impact of rising prices on spending power, but also reflecting concerns over tightening financial conditions as policymakers seek to subdue inflation by hiking interest rates to cool demand. The surveys also saw increasing cases of companies worrying about the impact of raw material and staff shortages, albeit with these supply-side concerns moderating compared to prior months. 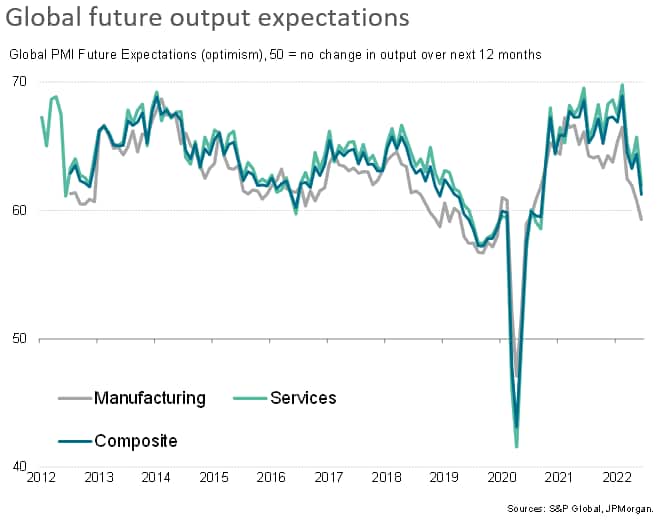 Future expectations are running especially weak by historical standards in India and the eurozone, the US and the UK. On the other hand, sentiment is particularly buoyant in Brazil and Japan and has lifted slightly above its long run trend in China. 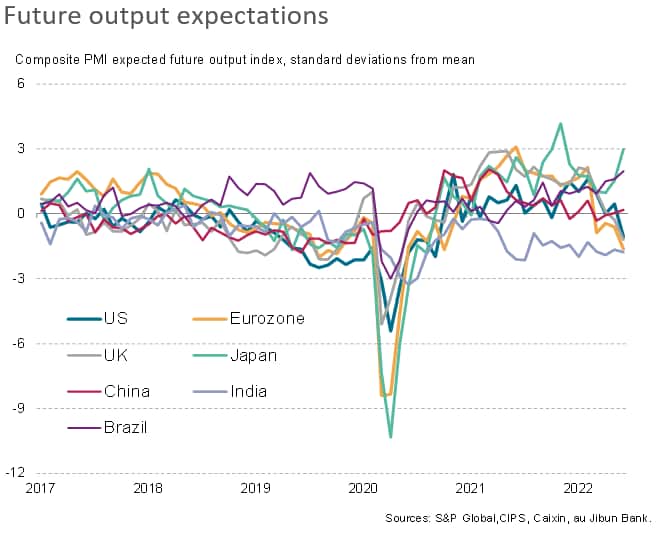