The pace of global economic growth revived in February having slumped to a one-and-a-half year low in January, bringing encouraging news of a muted impact from the COVID-19 Omicron wave. Although price pressures remained elevated, linked to ongoing supply constraints and rising energy prices, business optimism rose to the highest recorded for a decade as firms looked to better times ahead with the pandemic's disruptions continuing to wane.

However, Russia's invasion of Ukraine has since changed the economic landscape, posing downside risks to economic growth - notably in Europe - and driving inflationary pressures higher via higher energy and other commodity prices, whilst also disrupting supply chains. 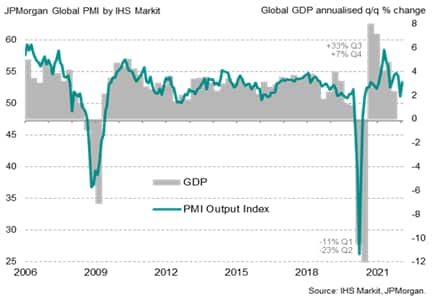 The global economy expanded for a twentieth straight month in February, according to the JPMorgan Global PMI™ (compiled by IHS Markit, now part of S&P Global), with the rate of expansion accelerating from January's 18-month low as the COVID-19 Omicron wave showed signs of easing. The PMI rose from 51.1 to 53.4, a level broadly indicative of global GDP growing at an annualized rate of just over 3% in February after 2% growth was indicated in January.

Both manufacturing and services growth improved in February, the latter recording the steeper acceleration and reflecting the loosening of pandemic containment measures globally after two months of tightening. 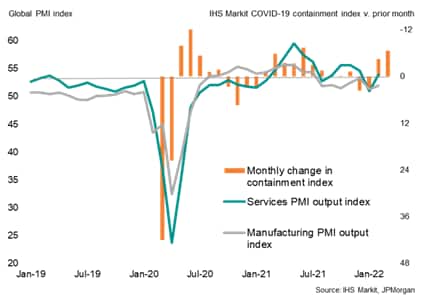 * IHS Markit's COVID-19 Containment Index is based on a basket of measures applied by governments to control the spread of the pandemic, such as non-essential business closures, school closures and travel and mobility restrictions linked to social distancing policies. As these measures are tightened, the index rises towards 100 and a relaxation of measures causes the index to fall towards zero.

Service providers in fact largely headed the detailed sector growth rankings in February, led by Other Financials. However, consumer facing service providers such as Tourism & Recreation remained subdued amid the ongoing pandemic, albeit returning to growth after having been hit hard by the Omicron wave in January. Transportation also remained especially subdued, one of only two sectors to report falling output (the other being food production). Ongoing supply chain bottlenecks and labour shortages also continued to limit growth in many manufacturing sectors, notably autos and machinery & equipment. 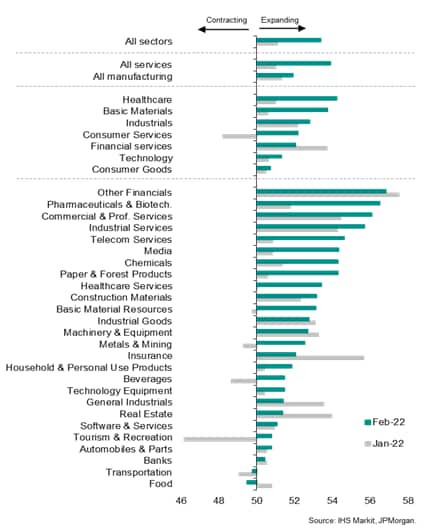 The UK led the major developed economies, with business activity growth surging in February as COVID-19 restrictions were almost entirely withdrawn. Less comprehensive easing of containment measures in the eurozone and US also led to faster growth after Omicron related slowdowns in January. While UK growth hit the highest since last June, with the composite PMI up to 59.9 from 54.2 in January, US growth rebounded to the highest since December - an output index of 55.9 against 51.1 in January - while the eurozone saw the fastest growth since last September, with the PMI recovering from 52.3 in January to 55.5.

In contrast, Japan's PMI fell from 49.9 to 45.8 to indicate the steepest decline since last August as containment measures were tightened again.

Output in the largest developed economies 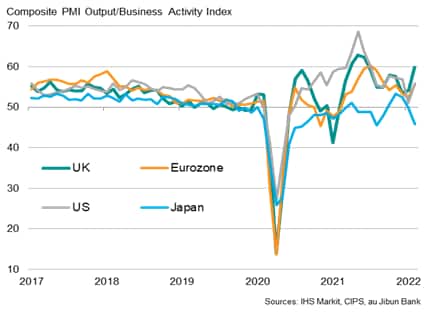 Looking at the major emerging markets, India and Brazil reported similar rates of expansion with growth accelerating in both cases to result in composite PMI readings of 53.5. However, while India's expansion was led by stronger manufacturing, helping to offset ongoing modest services growth, the reverse was evident in Brazil, where a fifth monthly decline in manufacturing was offset by resurgent services growth.

China, pursuing a 'zero-COVID' policy, broadly stagnated for a second successive month amid increased health restrictions, its composite PMI holding at 50.1 due to a stagnation of both goods and services output. Russia, its PMI at 50.8, was also more or less stalled, as resurgent service sector growth was offset by a renewed manufacturing decline.

Output in the largest emerging markets 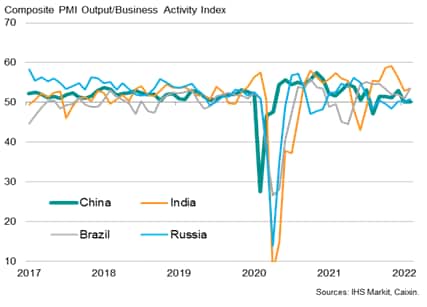 Prices charged for services meanwhile rose at an unprecedented rate in the PMI's survey history as rising material, energy and staff costs were increasingly passed on to customers. 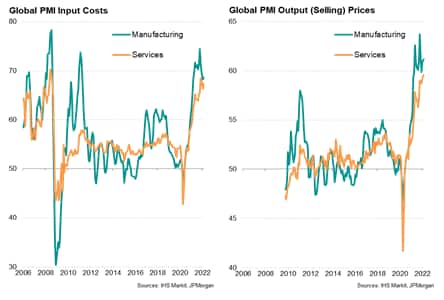 New survey highs were consequently seen for selling price inflation rates in the UK and eurozone, with the US' rate running at the second highest ever recorded. 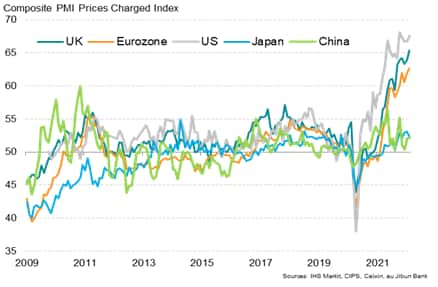 In contrast, the PMI selling price inflation rate cooled in Japan, running at only a very modest level by comparison to those seen in the US and Europe, and remained subdued in China, underscoring how supply-constraint-driven inflation remained very much a phenomenon of the western world in February.

However, measured globally, the overall signal from the PMI was one of consumer price inflation continuing to run at a very elevated level in coming months as rising charges for goods and services are likely to feed through to households. Recent surges in energy prices suggest further upward price pressures are likely. 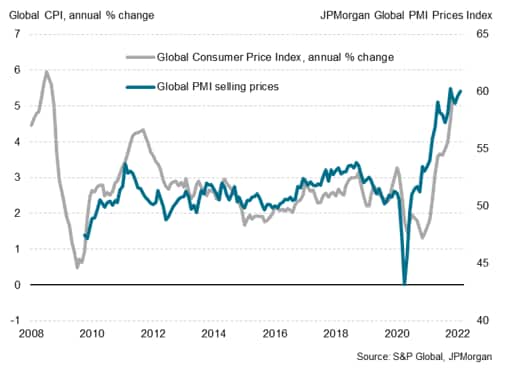 Outlook brightened to decade-high prior to Ukraine invasion

As well as tracking the above hard data, the PMI surveys also asks PMI respondents to report on their expectations for the year ahead. This forward-looking series showed business optimism at one of the highest levels recorded since comparable data across manufacturing and services were first available globally a decade ago. The survey's index of optimism in the service sector, which has a longer back history, hit an 11-year high, while sentiment in manufacturing rose to the highest since last April, rising to a level rarely exceeded in the survey's history.

Firms across both sectors reported that confidence had improved primarily as a result of growing hopes of a potential end of COVID-19 containment measures, in turn buoyed by signs of the Omicron wave having had only a muted economic impact on both demand and supply chains.

However, the February monthly PMI data were collected before the invasion of Ukraine, which is likely to have severely affected growth expectations while simultaneously pushing price expectations even higher. March's flash PMI data, published 24th March and covering business conditions in the US, Eurozone, UK, Japan and Australia, will reveal the initial impact of the war. 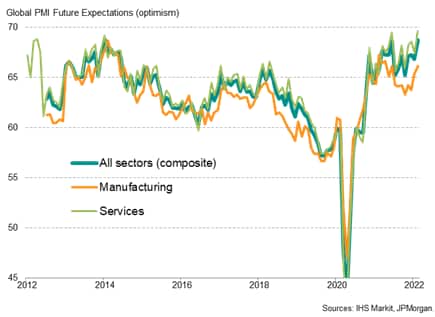