The global economy slowed in December as rising COVID-19 case numbers dented the service sector expansion. The fresh virus wave comes at a time when the manufacturing sector is reporting an easing of supply constraints, which had helped raise production levels.

The key risk to watch going into 2022 will be whether the Omicron variant further subdues growth and disrupts supply chains once again, just as the demand recovery from the pandemic fades away.

Global economic growth slowed at the end of 2021 amid rising COVID-19 infection rates, though remained robust. The JPMorgan Global PMI™ (compiled by IHS Markit) fell from 54.8 in November to 54.3 in December, a three-month low.

The data therefore point to steady economic growth in the fourth quarter as a whole, with the rate of expansion ticking slightly higher compared to the third quarter but remaining well below the growth surge seen in the second quarter. 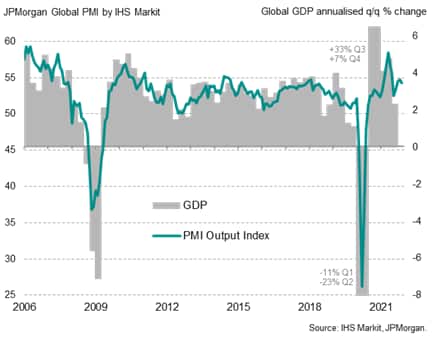 The PMI was pulled lower by a slowing of service sector growth, which slipped to the weakest for three months. In contrast, manufacturing growth accelerated to the fastest since July, albeit running behind that of services for the ninth month running. 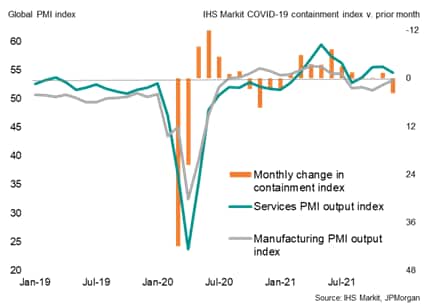 * IHS Markit's COVID-19 Containment Index is based on a basket of measures applied by governments to control the spread of the pandemic, such as non-essential business closures, school closures and travel and mobility restrictions linked to social distancing policies. As these measures are tightened, the index rises towards 100 and a relaxation of measures causes the index to fall towards zero.

The weaker expansion of the manufacturing sector relative to services in recent months has been a function of the service sector benefitting from the opening up of economies after COVID-19 related lockdowns, while manufacturing has struggled amid ongoing supply constraints.

However, December saw both of these trends move into reverse somewhat. Rising COVID-19 infection rates, fueled by the widening spread of the Omicron variant, led to renewed restrictions (both imposed and voluntary) on face-to-face service sector activity in some economies during December. Manufacturers meanwhile reported that constraints on production had eased, though nonetheless remaining a significant drag on production in many cases.

Measured globally, the number of companies reporting that output was constrained by raw material or staff shortages fell for a second month in December, down from an unprecedented peak in October, albeit still running almost three times higher than the long-run average. 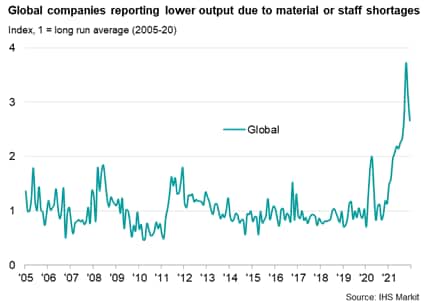 The degree to which supplier delivery times lengthened also moderated for a second successive month during December to the lowest since March, hinting that - although supply chains remain under pressure - the worst may be over in terms of average supplier lead-times. 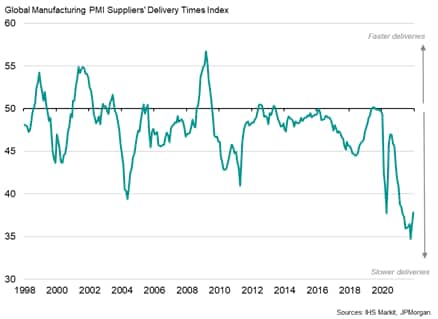 This alleviation of the supply crunch is underscored by the PMI surveys also showing the number of companies reporting items in short supply to have fallen to the lowest since February, suggesting that shortages peaked back in June. 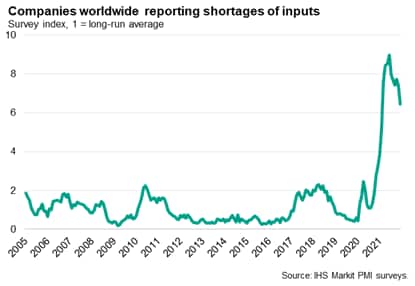 Most prominent was a further reduction in the number of companies reporting semiconductors to have been in short supply, which dropped in December to the lowest since January of last year. 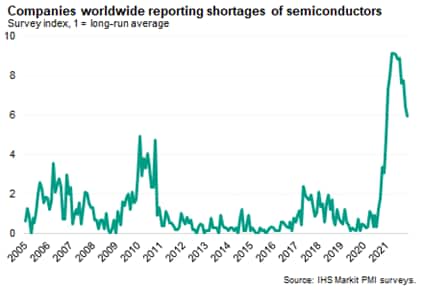 However, it should be noted that the further COVID-19 wave from Omicron poses a risk to future growth via renewed production and supply chain disruptions. Note that the latest - December - PMI data were collected at a time of COVID-19 case numbers continuing to rise.

Furthermore, just as the supply chain squeeze is showing signs of alleviating, the global demand recovery is showing signs of fading. Measured by the number of companies globally that reported rising demand to have contributed to higher inflows of new orders, the PMI surveys indicate that the demand recovery peaked in June 2020, with a second demand wave peaking one year later in June 2021. Since then, the contribution from demand to rising order books has been on a downward trend, sliding in December to the lowest since April 2020, at the start of the pandemic. 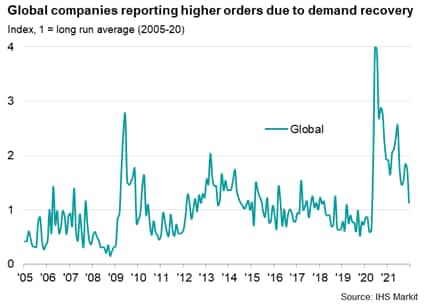 Looking at the major developed economies, the US led the expansion in December, with growth showing greater resilience compared to the UK and Eurozone, where growth rates slowed sharply. The most notable divergences were evident in the service sectors, linked to the increase in COVID-19 restrictions in Europe. Whereas UK and Eurozone growth rates slipped sharply to ten- and nine-month lows respectively, the US saw only a very marginal slowdown.

Japan meanwhile continued to lag, reporting slightly weakened output growth in both manufacturing and services, though continued to pull out of the Delta-wave induced downturn recorded between May and September of last year.

Output in the major developed markets 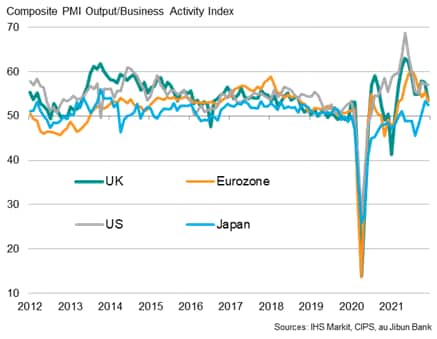 Looking at the four largest emerging markets, India reported the fastest pace of growth for the fifth month running in December, albeit with growth slowing in both manufacturing and services to the weakest since September, as the Delta wave rebound faded and new virus worries intensified.

COVID-19 factors also inhibited growth in both Russia and Brazil, the former more or less stalled on the back of a third month of falling service sector activity and the latter seeing growth hold at the six-month low seen in November thanks to an ongoing manufacturing downturn.

In contrast, China saw a marked pick up in the rate of growth, with activity rising at the fastest rate since July as businesses in manufacturing and services continued to recover from the Delta wave disruptions, aided in part also by demand rising thanks to government measures to reduce prices.

Output in the major emerging markets 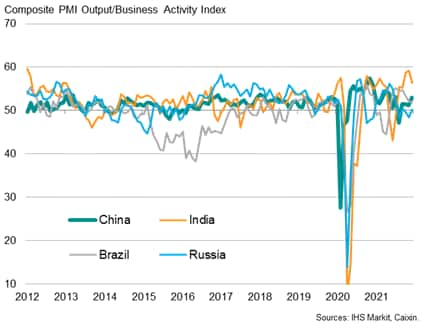