The IHS Markit's eurozone manufacturing PMI broke new records for a fourth straight month in a row during June, rising to a new high of 63.4. The recent growth spurt in manufacturing is therefore the strongest recorded for at least 24 years. 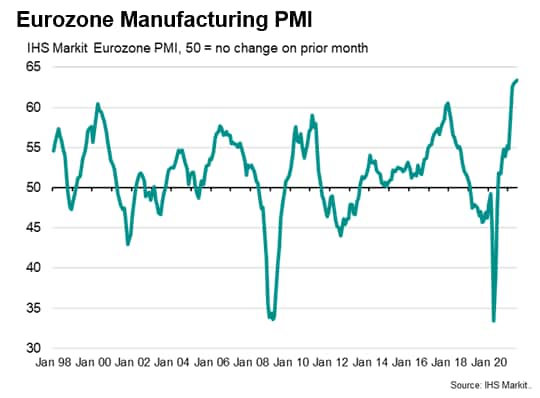 Both output and new orders rose at some of the fastest rates ever seen by the survey as demand surged following the opening up of economies from COVID-19 lockdowns, and as vaccination progress drove renewed optimism about the future.

However, the good news is tempered by the expansion being accompanied by unprecedented price rises, in turn fuelled in many cases by record supply chain delays. The speed of the recent upsurge in demand has led to a sellers' market as capacity and transportation constraints limit the availability of inputs to factories. 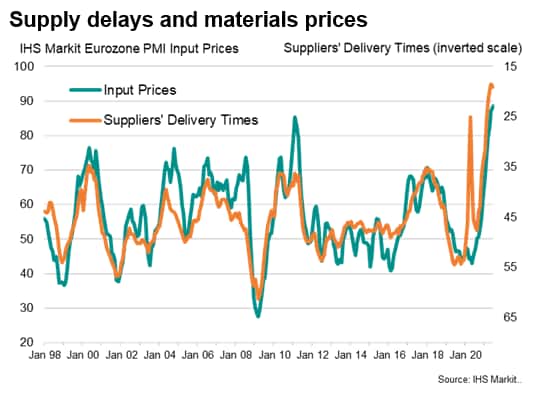 A key indicator of capacity constraints is the survey's suppliers' delivery times index. Sub-50 readings of this index mean it is taking longer for suppliers to provide goods to factories, on average. This tends to result in higher prices, as manufacturers are willing to pay more to ensure sufficient supplies of key inputs. The supplier delivery times index readings for May and June were the lowest ever recorded by the survey, signalling an unprecedented degree of supply delays.

A second indicator of constraints is the survey's backlogs of work index. This index measures the amount of work (or orders) that firms have received but either not yet completed or not even started working on. This index has also been running at all-time highs in May and June, signalling an unprecedented accumulation of outstanding work.

A third indicator of concern is the amount of finished goods inventory held in warehouses. These inventories fell in June at the steepest rate since August 2009, as high sales to customers depleted warehouses across the eurozone.

There are encouraging signs, however, suggesting that companies are expanding capacity to boost supply and meet rising demand, which should alleviate some of the upward price pressures.

First, employment rose in June at the fastest rate recorded since the survey began in 1998 as firms hired more workers to meet demand. This workforce expansion should help reduce growth of backlogs of work in coming months. 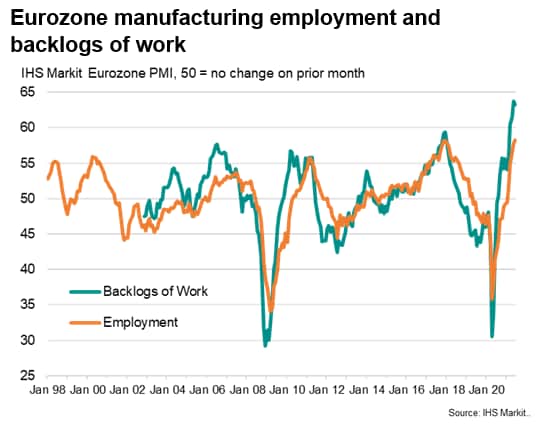 In particular, record employment growth was reported by firms that specialise in supplying inputs to other companies (intermediate goods producers), which in turn fuelled a near record rise in production of these goods. 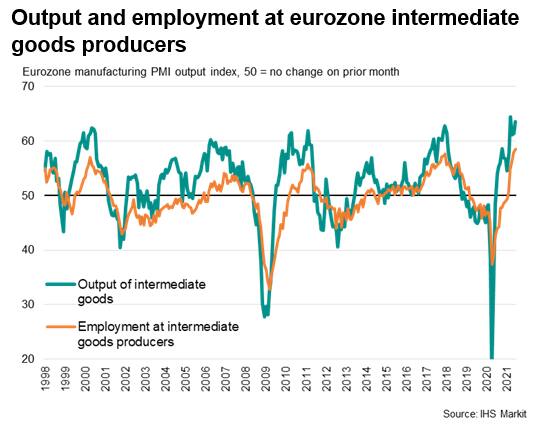 Second, the surge in hiring is being accompanied by an unprecedented spell of investment in machinery and equipment. Producers of these investment goods reported that new orders have been rising at a survey record pace in recent months, and continued to rise sharply in June, hinting that capex spending is growing sharply as firms expand production capacity.

This expansion has been facilitated by improved optimism about the year ahead, with future output expectations running at the highest yet recorded by the survey in recent months. 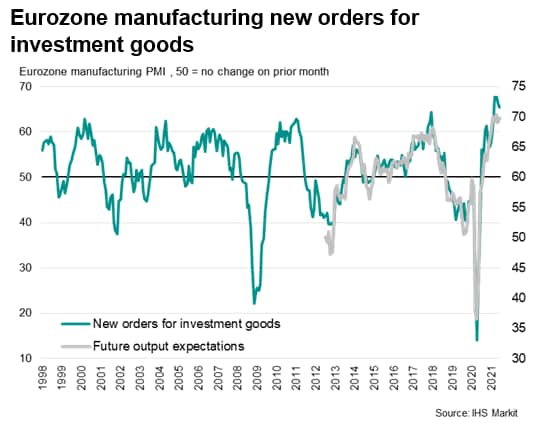 The expansion of capacity via increased employment and greater capital expenditure on business equipment and machinery should hopefully raise output levels in sectors that are currently straining to meet demand, and hence remove some of the upward pressure on prices for these goods. This will inevitably take some time, but in the absence of these developments the inflation outlook would be considerably darker.

Two other factors arguably add to the story that the current inflation spike will prove transitory are drawn from the anecdotal evidence from the survey.

First, the reasons given for longer delivery times are commonly associated with short-term issues due to the immediate surge in demand as economies have opened up while logistics capacity remains constrained. Widespread issues such as port congestion and a lack of shipping containers should soon fade as the initial rebound from the pandemic passes.

Second, the survey responses revealed a high degree of safety stock building as companies sought to safeguard against potential future supply disruptions. This is corroborated by recent PMI survey data showing that the amount of inputs purchased by manufacturers are growing faster than existing production requirements to an extent not previously recorded by the survey with the exception of last April (when mainland China reopened its factories). This safety stock build is likely to be a particularly short-lived phenomenon, as once sufficient precautionary inventories have been established, demand will return to normal, acting a relief valve on supply chains and prices. 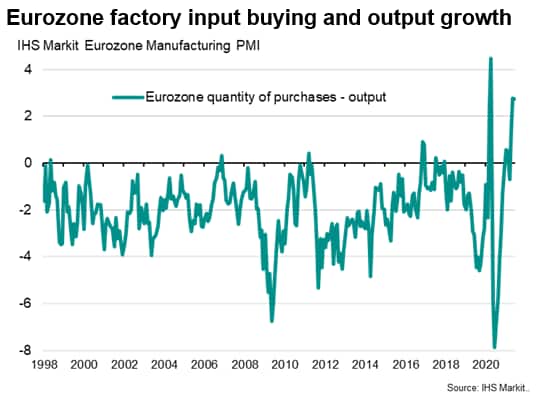 We have therefore established three key indicators of capacity constraints to monitor:

We have also highlighted two key series to watch in relation to how quickly companies may be building additional capacity to cope with rising demand:

Finally, we have identified two transitory factors to watch relating to the recent imbalance of supply and demand:

All will need to be monitored closely in coming months to understand the degree to which the current price spike may persist.