The eurozone economy is being dealt yet another blow from COVID-19, with rising infection levels dampening growth in the service sector in particular to result in a disappointing end to 2021. Germany is being especially hard hit, seeing the economy stall for the first time in a year-and-a-half, but the growth slowdown is broad based across the region.

Encouragement comes from the manufacturing sector, however, where the strain on supply chains is showing some signs of easing, in turn helping to revive factory production. These easing supply constraints have alleviated some of the upward pressures on inflation, though the overall rate of price increase in December was still the second highest on record. While inflation could soon peak, the rate of increase remains elevated.

Looking ahead, the Omicron variant poses downside risks to the growth outlook as we head into 2022, and any accompanying disruption to supply chains could result in price pressures spiking higher again. 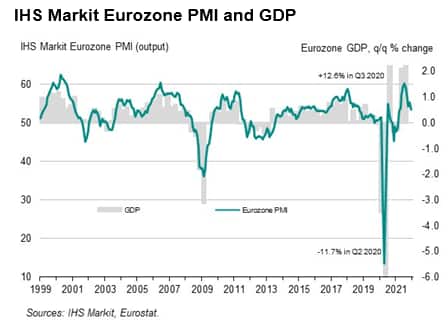 The headline IHS Markit Eurozone Composite PMI® dropped two points from 55.4 in November to 53.4 in December, according to the 'flash' reading*, indicating an easing in the rate of output growth to the lowest since March. The decline takes the average reading for the fourth quarter to 54.3, substantially lower than the 58.4 average seen in the third quarter. As such the PMI data point to a marked weakening of economic growth in the closing quarter of 2021, albeit with the rate of growth remaining above the survey's pre-pandemic long-run average of 53.0.

The December slowdown was led by the service sector, where business activity grew at the weakest rate since April. Slower service sector activity growth was in turn led by a steep fall in tourism and recreation activity of a similar magnitude to the declines seen at the start of the year amid rising COVID-19 infection rates and associated restrictions across the region. Inflows of new business into the service sector also slowed, dropping to the lowest since the recovery from early-2021 lockdowns began in May.

Manufacturing output growth meanwhile picked up, the factory sector outpacing services for the first time in five months, yet remaining well below rates of expansion seen earlier in the year. Despite manufacturers reporting a weakening of new order growth, December saw the largest expansion of production since September thanks to an easing of supply constraints. 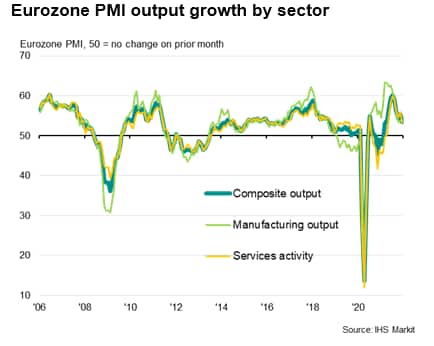 By country, growth stalled in Germany due to the first drop in new orders for goods and services since June 2020, ending a 17-month recovery. A renewed fall in service sector activity outweighed a pick-up in manufacturing production growth. 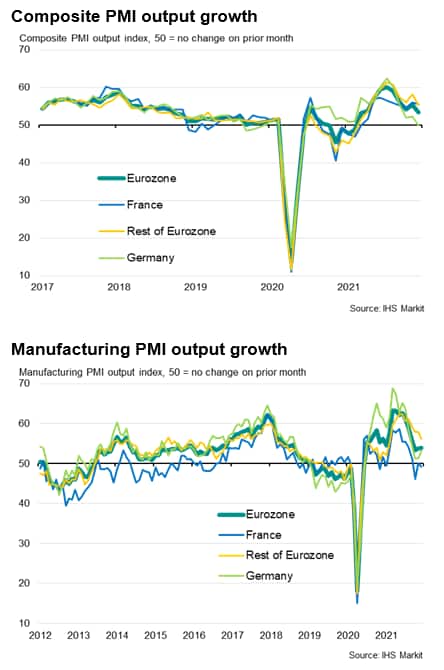 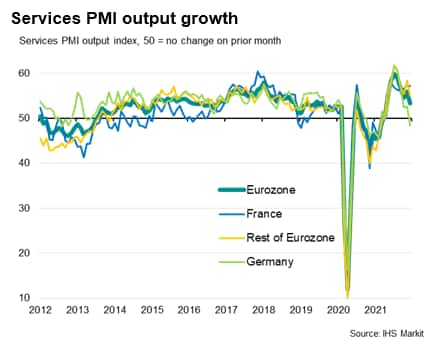 France meanwhile continued to grow at a solid pace, albeit down on November, as a relatively resilient service sector helped offset a decline in manufacturing output for the second time in the past three months.

The rest of the region recorded the slowest expansion since April, with growth moderating in both manufacturing and services, though rates of increase remained well above long-run averages.

Although supply chain delays continued to run far higher than anything seen prior to the pandemic, the lengthening of delivery times in December was the least marked since January. Input buying consequently rose at the fastest pace since August and pre-production inventories grew at a rate unprecedented in more than two decades of survey history, facilitating higher output in many firms. 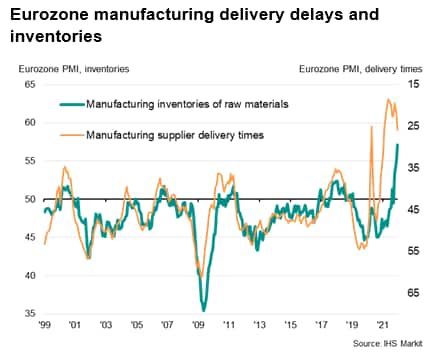 However, although input costs and average selling prices measured across both manufacturing and services both grew less steeply than in November, both series still showed the second fastest rates of increase recorded in the history of the survey. Companies reported that higher shipping costs, rising energy prices and increases in staff costs again added to the upward pressure on prices. 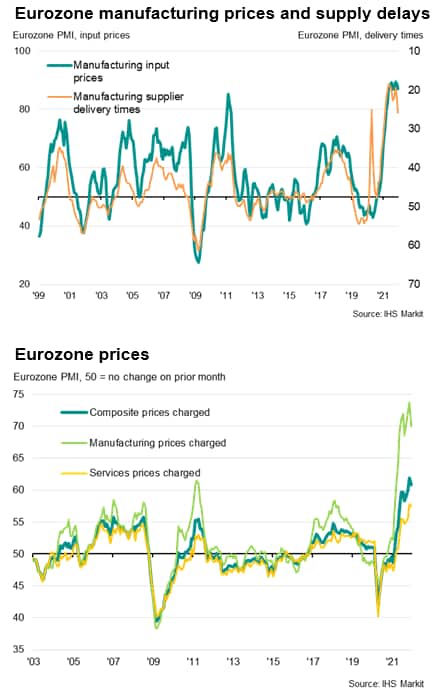 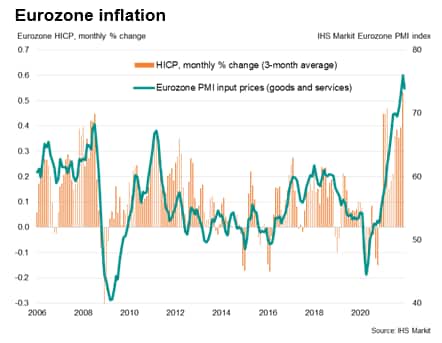 The lower PMI numbers for output and prices will, combined with the additional uncertainty for the outlook generated by the rise of the Omicron variant, add to the odds of the ECB restraining from any imminent withdrawal of stimulus.

Moreover, we believe that the ECB will be ready to act if financial conditions deteriorate. The sharp increase in inflation clearly limits the ECB's ability to use monetary policy to support the economy, but measures such as the implementation of a 'standby' asset purchase programme, an increase in net purchases, or the injection of some flexibility to asset purchases remain on the table. 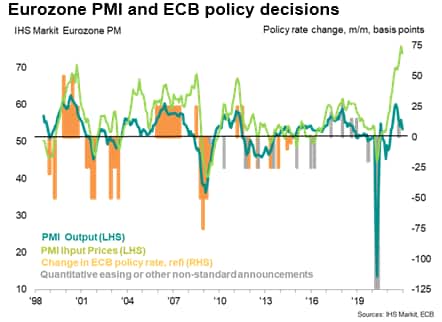 *The flash estimate is typically based on approximately 85%-90% of total PMI survey responses each month and is designed to provide an accurate advance indication of the final PMI data.