Eurozone business activity continued to grow at one of the strongest rates seen over the past two decades in August, the rate of expansion cooling only slightly despite widespread supply chain delays. Service sector growth exceeded that of manufacturing for the first time since the pandemic, buoyed by the further reopening of the economy.

However, firms' costs and prices charged rose at some of the fastest rates seen over the past 20 years once again as demand continued to outstrip supply.

The eurozone's economic recovery retained impressive momentum in August, with the flash PMI dipping only slightly from July's 15-year high.

The headline IHS Markit Eurozone Composite PMI® fell from a 15-year high of 60.2 in July to 59.5 in August, according to the 'flash' reading. The latest figure matched that seen in June to register the joint-second-fastest expansion seen since 2006 and puts the average for the third quarter so far at the highest for 21 years. 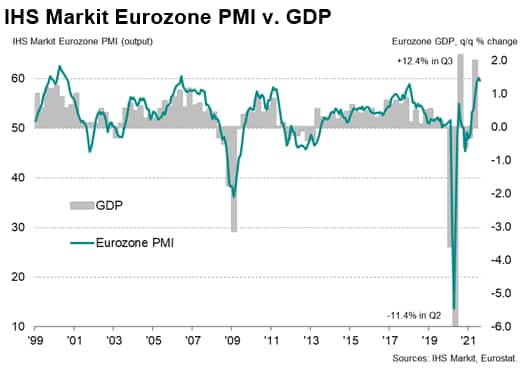 Growth in the service sector overtook that of manufacturing for the first time in the recovery from the pandemic as COVID-19 containment measures were eased further across the region to the lowest since the start of the pandemic. Growth in the service sector was marginally slower than July's 15-year high, however, as some firms came under pressure from the recent rise in COVID-19 cases. Moreover, as the chart below shows, the bulk of the opening up of the economy - and therefore the associated boost to business growth - is now behind us. 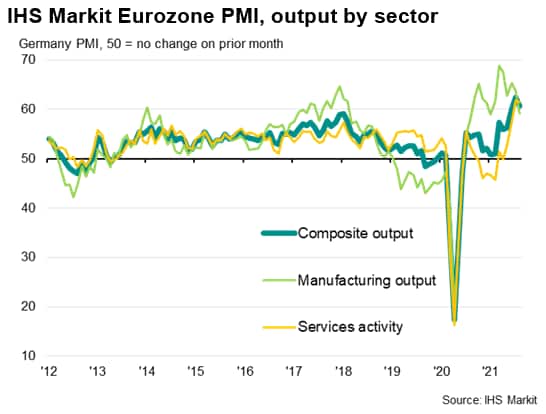 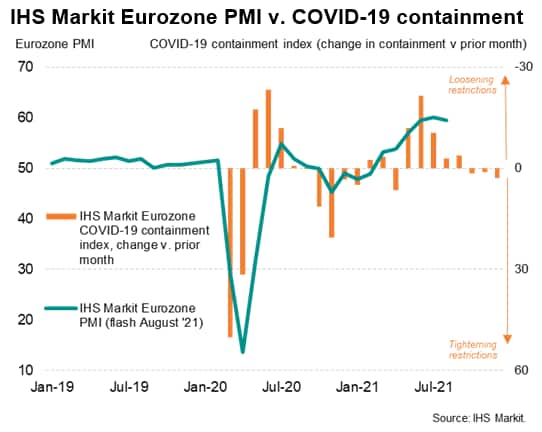 Manufacturing output meanwhile continued to grow at a pace rarely exceeded over the survey history as a result of the ongoing recovery of demand from the depths of the pandemic, though the rate of expansion moderated for a second month to the weakest since February. Slower production growth was primarily linked to supply chain constraints.

Suppliers' delivery times - a key barometer of supply delays - continued to lengthen at one of the sharpest rates ever recorded by the survey in August, albeit with the incidence of delays moderating slightly for a third successive month.

Even with some tentative signs of supply lead times growing at a slower rate, supply delays combined with surging demand nevertheless once again played a key role in driving input costs higher. 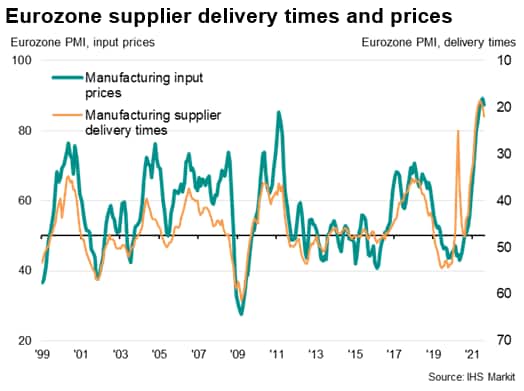 These higher costs were commonly passed on to customers in the form of higher selling prices for both goods and services. Measured overall, input cost and selling price inflation rates were the third-highest recorded over the past two decades, exceeded only by the increases seen in June and July.

While the topping-out of the survey's price and supplier delivery times indices hint at a potential peaking in the rate of consumer price inflation, the survey nonetheless signals ongoing price rises - merely at a slower rate of inflation. 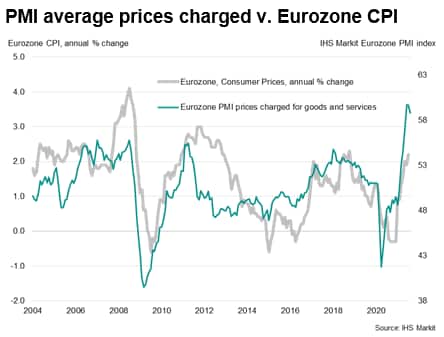 On one hand, the spread of the Delta variant is posing further supply chain problems, notably in Asia, which is likely to feed through to sustained global material price rises in coming months.

On the other hand, encouragement comes from a second month of job creation at the strongest rate for 21 years, which reflects efforts by firms to boost operating capacity and meet demand, which should ultimately further help bring price pressures down. The concern is that we are seeing some upward movement on wage growth as a result of the job market gain, which could feed through to higher inflation, especially if combined with persistent supply delays. 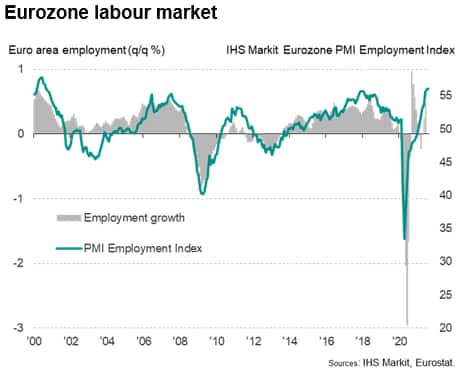 … but backlogs of orders still rise

Note that, although the further jobs gains helped boost operating capacity, backlogs of work (an important guide to capacity utilisation and future inflationary pressures) still rose during August at a rate exceeded only twice in the survey history (after the increases seen in June and July), underscoring how demand is still very much running ahead of supply. This imbalance is generating a seller's market for many goods and services, and of course labour as firms strive to boost workforce numbers. 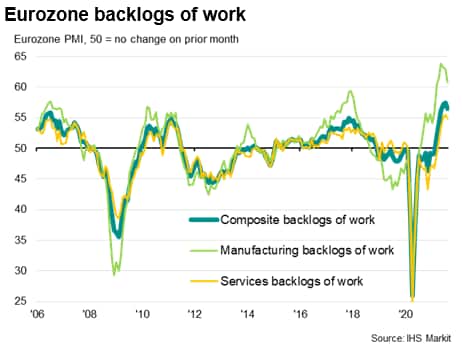