The eurozone economy looks set to contract in the third quarter as business activity slipped into decline in July and forward-looking indicators hint at worse to come in the months ahead. Output and new orders both fell for the first times since the COVID-19 lockdowns of early 2021. An accelerating downturn in manufacturing was accompanied by a near-stalling of service sector growth as the rising cost of living continued to erode the tailwind of pent-up demand from the pandemic.

Concerns over the weakening of demand were exacerbated by energy, supply and inflation worries to push business expectations lower, and also cause a steep drop in input buying and a pull-back in hiring.

Price pressures meanwhile remained elevated at levels not seen prior to the pandemic, though rates of inflation of both selling prices and input costs moderated amid an easing of supply constraints and weakened demand.

The PMI data showing a renewed contraction and elevated price pressures therefore underscore the challenge facing policymakers of taming inflation while avoiding a hard landing for the economy. 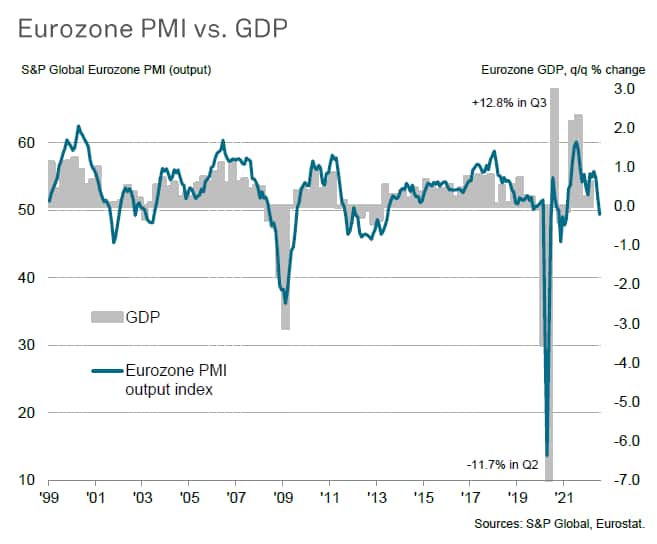 The seasonally adjusted S&P Global Eurozone PMI® Composite Output Index fell from 52.0 in June to 49.4 in July, according to the 'flash' reading. By dropping below the neutral 50.0 level, the July PMI signals a contraction of business output for the first time since February 2021.

Excluding pandemic lockdown months, July's contraction is the first signalled by the PMI since June 2013, indicative of the economy contracting at a 0.1% quarterly rate.

Manufacturing output fell especially sharply, dropping for a second successive month with the rate of decline accelerating to the fastest since May 2020. Barring COVID-19 lockdown periods, the July drop in factory output has not been exceeded since December 2012. Steepening factory downturns were recorded in both Germany and France while the rest of the region slipped into decline for the first time for just over two years. 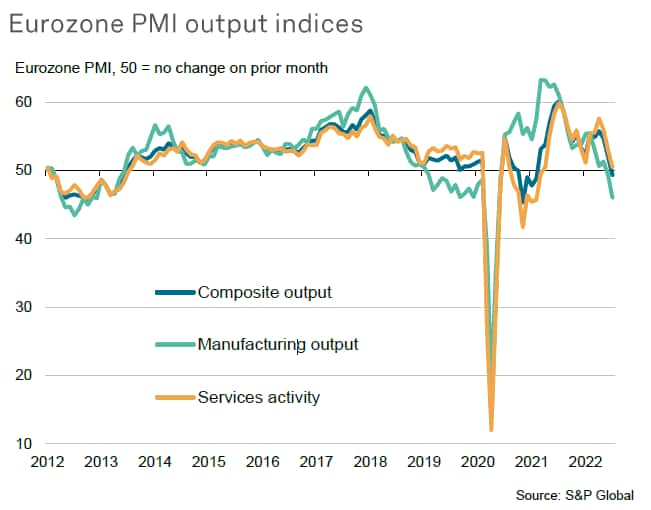 Service sector output continued to rise, but the rate of expansion has slowed sharply over the past three months to the weakest since April 2021. The service sector slowdown indicates that the boost to demand from the reopening of the economy has faded and growth is now at a near-standstill, with customers reportedly often deterred by the increased cost of living and concerns about the outlook.

However, perhaps of greatest concern is the plight of manufacturing, where producers are reporting that weaker than expected sales have led to an unprecedented rise in unsold stock. Production will likely need to be reduced as companies adapt to this weaker demand environment, in turn widely linked to rising prices. 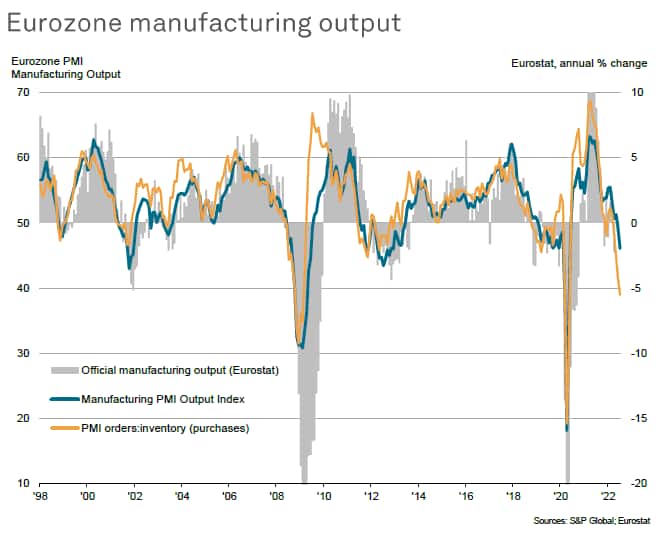 We can highlight three other PMI series which signal worse is yet to come in terms of the output trend. 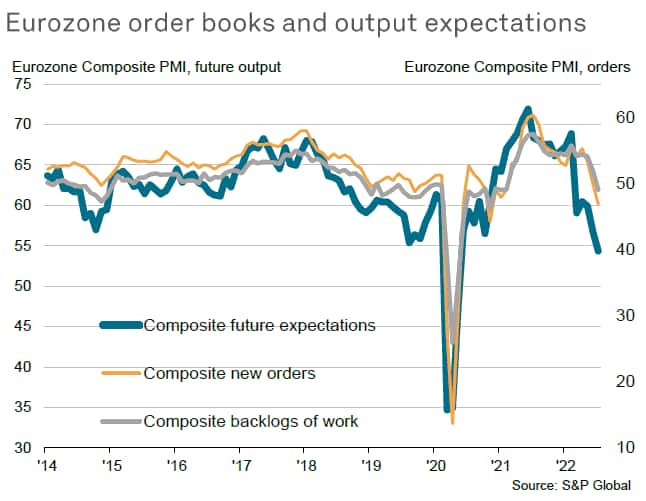 First, new orders for goods and services meanwhile fell solidly, dropping for the first time since February 2021. Excluding COVID-19 lockdown periods, the latest fall in new orders is the steepest since May 2013.

Second, backlogs of work fell across both manufacturing and services, declining for the first time in almost one-and-a-half years, reflecting the recent weakening of demand from customers and hinting at the build-up of excess capacity.

Third, business expectations for the year ahead fell to the lowest since May 2020, dropping to a level rarely exceeded in the past decade. Manufacturing expectations worsened to such an extent that more firms expect to cut output than increase production in the coming year, a situation not seen since the early days of the pandemic (and prior to that, 2012). Future expectations remained positive in the service sector, though nevertheless fell to the lowest since October 2020.

Although factory output was again constrained in many cases by component shortages, the overall incidence of supply delays continued to moderate. Average suppliers' delivery times lengthened in July to the least extent since October 2020. This easing of supply chain pressure largely reflected the biggest monthly drop in purchasing of inputs by manufacturers since the initial pandemic lockdowns of early-2020.

This steep reduction in input buying by factories in turn reflected a large rise in warehouse inventories of inputs and the largest build-up of unsold finished goods ever recorded by the survey, often linked to lower than anticipated sales to customers and weakened order books.

The combination of falling demand and easing supply constraints helped to cool industrial input price inflation. Manufacturing input cost inflation slowed sharply as a result, down to the lowest for nearly one-and-a-half years, reflecting lower prices for many commodities, notably including oil.

Average charges for goods and services meanwhile continued to rise sharply in July, though the rate of inflation cooled for a third month in a row from April's all-time high to reach the lowest since February. Rates of selling price inflation eased in both manufacturing and services, often reflecting weaker cost growth and greater price competition amid lackluster demand.

While the overall rate of increase remained significantly higher than anything seen prior to the pandemic over the two decade series history, the PMI data point to a peaking of core inflationary pressures, albeit with energy prices (notably gas) remaining a major unknown variable in terms of the future path of inflation.

The flash PMI data come one day after the ECB raised its main policy rate for the first time in over a decade, a 50-basis point hike taking its deposit rate out of negative territory for the first time in eight years. However, the PMI data highlight how the ECB is raising interest rates at a time when the demand environment is one that would normally see policy being loosened, suggesting that higher borrowing costs will inevitably add to recession risks. 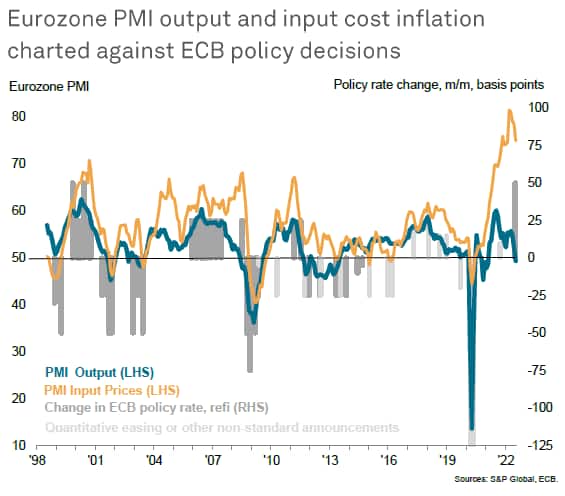