The preliminary PMI survey results for July signal a significant loss of growth momentum in the Japanese economy at the start of the third quarter. While second quarter growth had been boosted by the reopening of the economy from Omicron-related containment, July has seen this rebound fade leading to much-reduced service sector growth and a renewed fall in manufacturing output. The details found in the survey's sub-indices, such as new orders and inventories, points to the trend deteriorating further in August. Price pressures meanwhile cooled amid the waning demand environment, albeit down only slightly from June's all-time high.

Business activity growth slowed to a near standstill in July, as the economy's rebound from Omicron-related containment measures lost momentum. The au Jibun Bank composite PMI™, compiled by S&P Global, fell from 53.0 in June (its highest level since last November and one of the highest readings seen since 2014) to 50.6, its lowest since March.

While the average PMI reading for the second quarter signalled a return to growth after the mild contraction seen in the first quarter (when GDP fell 0.1% on the prior quarter), the July flash PMI reading points to a renewed weakening in the rate of economic expansion. 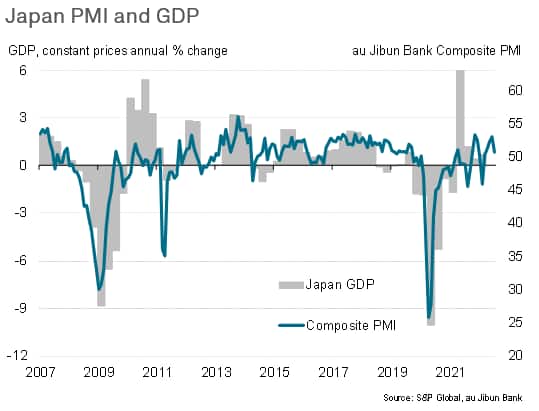 Growth trends worsened in both manufacturing and services. Manufacturing output fell for the first time since February, as factories cut production in line with the first fall in new orders since September of last year. Service sector activity meanwhile grew at the slowest pace for three months, with the rate of expansion cooling markedly from June when activity had grown at the fastest rate since 2013 amid the recent relaxation of COVID-19 restrictions. 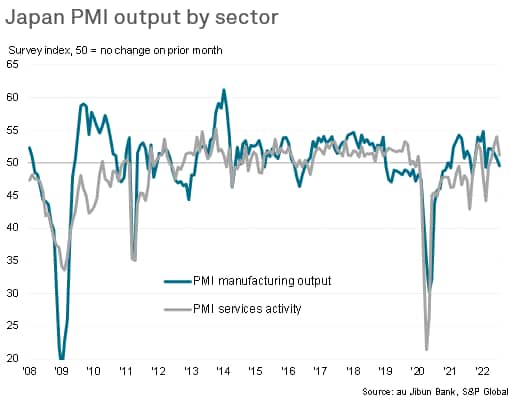 Several forward-looking indicators suggest that growth will remain subdued, and could even slow further in the near-term.

Second, inflows of new business rose only modestly in July, reflecting the renewed fall in demand for goods and a weakening rate of demand growth for services. Total new order growth in July increased at the slowest rate for three months. 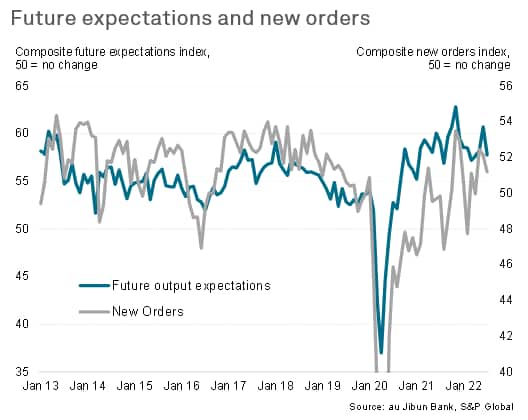 Third, manufacturing companies also reported growing incidences of inventories being accumulated due to weaker than anticipated sales, suggesting that production could be slimmed down in coming months unless demand revives. This is illustrated by the survey's new orders to inventory ratio, which fell to a two-year low in July, dropping to a level consistent with a significant worsening of the output trend in the months ahead. 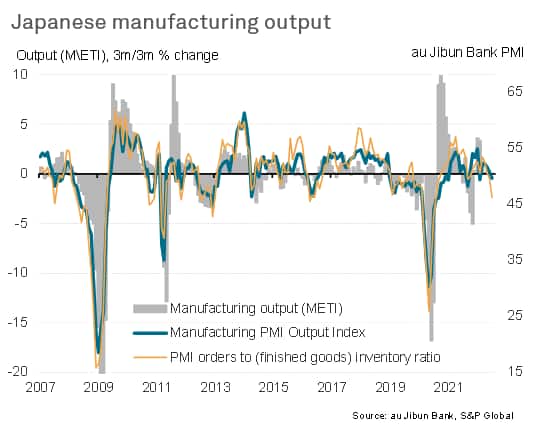 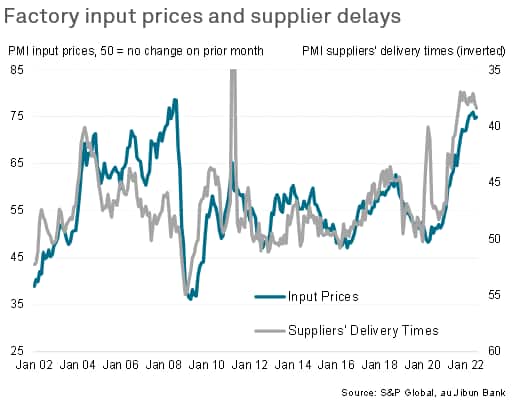 This reduced upward pressure on costs, which combined with reports of subdued demand prompting more price competition, led to a moderation of average selling price inflation for goods and services, which had also hit a record high in June.

The easing in the survey price gauges therefore suggests a tentative peaking of inflationary pressures, which should help to moderate consumer price inflation in the coming months, although clearly the rate of increase remains elevated by historical standards, linked to ongoing shortages, still-high energy prices and the recent depreciation of the yen. 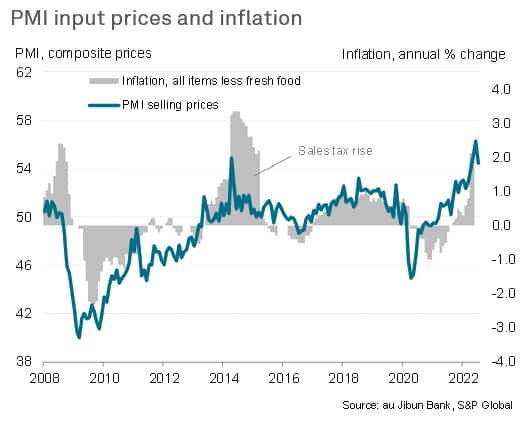